Menu
Confraternity of the Most Holy Rosary > Uncategorized > Unwanted 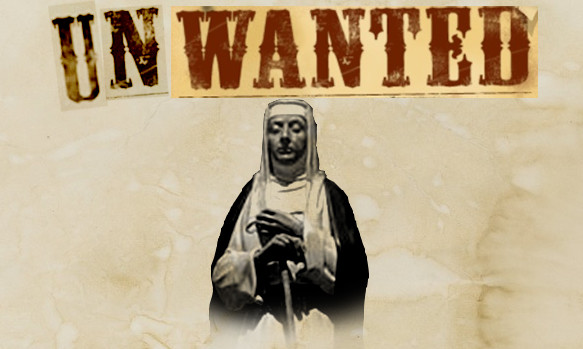 An Italian family typically erupts in joy at the birth of a child. Bl. Margaret of Castello, however, was unwanted from the day she was born. Had twenty-first-century technology been available to her thirteenth-century parents, she might not have been born. She was blind, lame, dwarfed, and hunched. Her parents looked upon her only as a hindrance to their social standing. While they baptized her Margarita (pearl), they did not thank God for the gift. Rather, they stowed their treasure behind thick walls, keeping her out of sight, as if she did not exist. Margaret lived a thoroughly hidden life.

When Margaret reached the age of six, a parish priest became her only friend. Through a small hatch, he taught her about God, the sacraments, and the mystical life. For ten years Margaret lived shut off from her family, having minimal communication through a stone wall. Hidden in Christ, she carried a seed within her more marvelous than all the hosts of angels. Yet, her parents did not see it. Instead of abandoning themselves to Divine Providence, they abandoned their daughter after making pilgrimage to a Franciscan shrine in Castello. Hoping for a miracle, they left disappointed and daughterless.

The severity of her rejection is so soul crushing it’s hard to believe. Even the movie Little Margaret of Castello desperately tries to depict her parents’ disappointment (see 18:00). They exclaim, “What kind of a God would do this to me?!” “She’s so ugly!” “We must keep her out of sight! No one must know!” The acting may be over the top, but how does one soberly depict Margaret’s mother and father? Their actions are so horrifying and perplexing, recounting the story makes one incredulous. They abandoned their daughter because she was blind and ugly? Yes, the story is true. Though she was blind, lame, and now orphaned, she was not alone. God had already taken Margaret into His home.

The psalmist’s words became her own:

Her eyes received no light from the sun, but she had no need of it. The Lord was her light and salvation. After losing her parents to their blind and aimless pursuits, Bl. Margaret fixed her gaze on her true target. She gave her life over to God in consecration, joining the Dominican Order. As a tertiary sister she would bring comfort to prisoners, remedy to patients, and hope for the moribund. In a profound way, the pain and injustice she suffered redounded into charity and works of mercy. Her parents deprived her of human affirmation, but God the Father gave her divine life.

The story of her unwanted life manifests the Father’s love prophesied by Ezekiel:

No eye pitied you, to do any of these things to you out of compassion for you; but you were cast out on the open field, for you were abhorred, on the day that you were born. “And when I passed by you, and saw you weltering in your blood, I said to you in your blood, ‘Live, and grow up like a plant of the field’ (Ek 16:5-7).

The words of the prophet—albeit referencing Israel—evokes imagery of the staggering number of abortions that have plagued our time. Sadly, many parents have refused to love their children and take them into their homes. Yet, if they knew the gift of God, they could see the beauty of life, which is so evident in today’s patroness, Blessed Margaret.

God spoke to Margaret the words “Live, and grow up like a plant of the field.” In her baptism, she was given a new life. She was adopted and given the power to be a daughter of God. With the life that God gave her, the seed of grace silently grew in her soul in the darkness of her cell. Finally, as her parents cast her off, she blossomed in sanctity. She died at age 33 on April 13, 1320, and has numerous miracles attributed to her intercession. In a poetic justice, what was once hid is now visible. Her incorrupt body is now displayed as a prized pearl under the altar of San Domenico in Citta di Castello. “For nothing is hid that shall not be made manifest, nor anything secret that shall not be known and come to light” (Lk 8:17).

We Dominicans celebrate Bl. Margaret’s feast day today, and our parish St. Patrick’s in Columbus, Ohio maintains a shrine to her. She continues to intercede for those who beseech her, and we continue to pray to her for help, especially those who are most unwanted.

“Blessed Margaret, patron of the unwanted, pray for us”