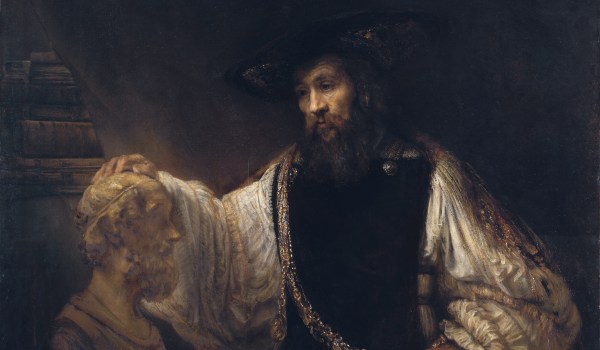 Have you heard that 2016 marks an important year for Catholics? Well, beyond the extraordinary Jubilee Year of Mercy and the 800th Anniversary of the Dominican Order, there is another important anniversary celebrated in 2016. But, this anniversary should be celebrated not just in the Church, but throughout the Western world. Though it might be overshadowed by the 400th anniversary of the death of Shakespeare (or 50 years of Batman), it should be remembered in its own right. I am speaking, of course, of Aristotle’s 2,400th birthday.

There is one stained glass window in the Church of St. Vincent Ferrer in New York City, a Dominican parish, which might seem unfitting for a religious space. Alongside the figures of  St. John the Evangelist and St. Albert the Great is the figure of Aristotle portrayed in his classical garb. One does not normally come across a pagan portrayed positively in ecclesiastical art, let alone one given a place of honor next to an evangelist and a doctor of the Church. And while it might seem odd to honor a Greek thinker born over two millennia ago, there are several reasons why we should. I think there are principally three reasons for Catholics to honor Aristotle: the value of his work, the use of his work in the elucidation of Christian doctrine, and as an example of the workings of God’s providence even among non-believers. Let us look at each in turn.

First, Aristotle should be celebrated for the value of his work. It would be imprudent (and impossible) to try and discuss his philosophical achievements here, so let it suffice to say that his influence can hardly be overstated in Western culture. Christian thinkers of the High Middle Ages referred to him simply as “The Philosopher,” a nod to his status as the chief source of human thought. But why should this be honored by Catholics? Well, Aristotle shows us the high capacities of human nature and of rational thought. God has given created things natures by which they can achieve their proper ends. Aristotle argued, and served as a witness, that a nature moves towards its perfection. Similarly, our human natures are given to us by God and are meant to find their proper perfection. For Aristotle, this natural perfection was coming to contemplate the cause of the universe. Aristotle’s work shows us the capacities of reason to come to know truth, and even to know of God’s existence and our elicited desire to come to know him.

Secondly, Aristotle has been used extensively in Christian theology. While some of Aristotle’s logical works had been available in Latin since the 6th century AD, it was after his rediscovery in the medieval West that his value was fully realized for Christian thought. Led by the Dominican Saints Thomas Aquinas and Albertus Magnus, and due to the translation efforts of the Dominican William of Moerbeke, Aristotle was used to better explain revelation. Because all truth comes from God, whether known by faith or by reason, these Dominicans were able to employ the thought of Aristotle in their theological works.

Finally, Aristotle is a great example of God’s providence among the pagan peoples. The Jewish people were not the only ones who were being prepared for the coming of Christ. As St. Clement of Alexandria argued, philosophy was the Greek’s “own Testament.” While certainly not directly inspired, Greek philosophy became the perfect tool to help explain tenets of the faith, such as the Trinity, the natures of Christ, and the sacraments. In God’s providence, natural reason achieved new heights under Aristotle, who was put in the service of Christian teaching. I think this is why he is pictured in the stained glass image (referenced above) with St. Albert the Great and St. John. Despite not knowing anything of God’s revelation, by God’s providence Aristotle was made useful in its elucidation.

While 2016 might be a year of many celebrations, it might be fitting to remember a philosopher who was born 2400 years ago in northern Greece. And while his inclusion in a stained glass window in a Catholic church might still seem odd, we are invited to honor a man who gave much in service to the Church, even if he didn’t intend to. In doing so, we can honor a God who has cared for us and given us the tools to come to understand Him better.

Image: Rembrandt, Aristotle with a bust of Homer