Menu
Confraternity of the Most Holy Rosary > Uncategorized > The True Believer 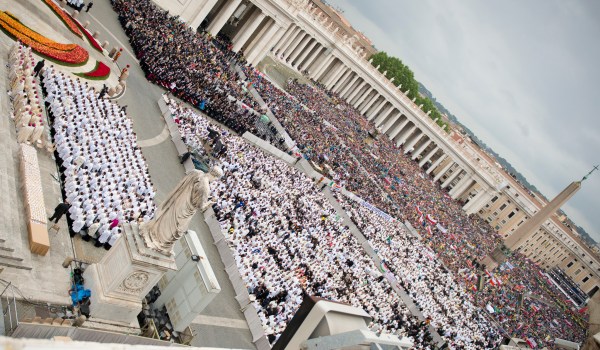 “Infant baptism. That’s just a method you Catholics use to swell your ranks.”

A co-worker once shared this criticism with me. From a purely political view, where numbers lead to might, which makes right, this accusation makes sense. It’s cynical, but when power and control are viewed as the sources of an institution’s success, then it’s an understandable interpretation. After all, what better way to control people and add numbers than to begin at infancy? Start the process then and have them for life, so the argument goes.

In 1951 Eric Hoffer wrote The True Believer, a classic work of sociology in which he examines the nature of mass movements. Hoffer was intrigued by the National Socialists of Germany and the communists of Russia and China. How did such large numbers of people come to believe in these causes? How did these institutions rise in power and exercise control over their constituents?

Hoffer answers these questions by examining the individual—the true believer himself—who has some salient characteristics disposing him to join such a cause as the ones mentioned above. Before becoming a true believer the individual is frustrated and lonely. He is disappointed with his life and blames society for the inadequacies he persistently experiences. Maybe most important though is his boredom. Hoffer writes, “There is perhaps no more reliable indicator of a society’s ripeness for a mass movement than the prevalence of unrelieved boredom . . . . To a deliberate fomenter of mass upheavals, the report that people are bored stiff should be at least as encouraging as that they are suffering from intolerable economic or political abuses.” Certainly lack of material prosperity or the presence of civil injustice can play a role in stoking this kind of populism. But Hoffer insists on the more fundamental role of boredom, that existential affliction that Walker Percy noted was particularly modern.

A mass movement requires a leader who uses simple slogans to gather his believers. He seeks to undermine the status quo creeds and institutions. He promises real social change. He also tends to unify his flock by means of hatred. Nothing galvanizes like a common enemy. Mass movements need a scapegoat to cast out from their presence. These factors make for a mass movement that a true believer can follow and even give his life for.

The co-worker mentioned above interpreted the Church along these lines. We have our leaders, our slogans, our methods, and our martyrs. The Church is made up of those who suffer from loneliness, frustration, and boredom. He thought the Church was just a mass movement—a successful and sometimes charitable one—but all the more pernicious for masking the motives of control behind its charities and messages of love.

So what sets the Church apart from a purely political mass movement? The early Church swelled with her own true believers. What is it they believed in? An intellectual? A slogan? An ingenious organizer? They believed in the Lord Jesus Christ: “More than ever, believers in the Lord, great numbers of men and women, were added to them” (Acts 5:12-16). The apostles, who were simple men, were clearly not preaching a political Gospel. Their experience with Christ purified them of the desire for a temporal messiah king. They were not hoodwinking the masses for their own ideological or personal ends. They offered neither silver nor gold (Acts 3:6). What they offered was Jesus Christ.

The early Christian believers, though certainly composed of men and women who were lonely and frustrated, were unified not by hatred, but by divine mercy. The apostles were fallen men, all besides John having abandoned Christ during his last hours. And having been restored in Christ they shared this mercy with others, preaching baptism for the forgiveness of sins. Their message went out to all the world. And they would give their lives joyfully for the sake of the Gospel.

The Church is united by mercy, not power or advantage. Her activity in the world is that of sanctification, not ideological trickery. Yes, she is powerful and exerts influence throughout society. But her battle is principally waged against the forces of sin, which will not prevail against her. This holy work begins in the heart of each believer. The Church is also united by truth. Take the Dominican Order for example. One of our mottos is veritas. We take vows of poverty, chastity, and obedience in order to devote ourselves wholly to the truth and share it with others. We feel called by Truth himself—by Christ, who called himself the Way, the Truth, and the Life. And we are sustained by him. Ever since Christ founded the Church, men and women have given their lives for the truth of the Faith, not just because it offered them some political leverage.

Infant baptism is not a power play to swell our ranks. Rather, we baptize (men and women of all ages) because we all share a fallen nature and thus all can share in Christ’s unmerited grace by which we are justified. Of course there is need for post-baptismal instruction and the flowering of that grace. But regardless of the age of the recipient, baptism is a free grace given to us so that we can be friends with Christ.

James Joyce famously said that Catholic means here comes everybody. The Church is incredibly diverse. Her ranks swell with people from every nation. So in some sense, the Church is a mass movement. But it’s a different sort than the political and social one described above. It is a movement of the Holy Spirit who has gathered and purified true believers for two thousand years, and continues this work today.