Menu
Confraternity of the Most Holy Rosary > Uncategorized > Are You What You Are? 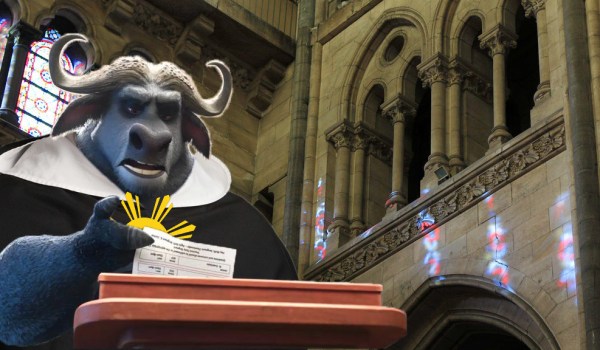 Disney Studios has caused quite a stir over its latest movie, Zootopia. There is little disagreement over the movie’s wit and charm, but its message has not received such universal acclaim. Interestingly, while many of the reviews out there praise or criticize Zootopia for having a noticeably political bias, they fail to grasp that there is something much deeper at stake in the movie than politics. Zootopia is a bold attempt to grapple with the most fundamental of human dilemmas, but the solutions it offers fall flat and can only leave us unsatisfied.

In Zootopia, every species of animal (sans humans) is rational, and they all live together in a strained harmony in a city that gives the movie its title. In one sense, Zootopia covers well-trod ground. The movie’s protagonist, a rabbit named Judy Hopps, is an underdog who dreams of making the world a better place as a police officer, despite overwhelming odds and the universal opinion that rabbits aren’t cut out for police work. Nevertheless, she makes her dreams come true by sheer force of will; basically your typical inspirational story.

Despite graduating at the top of her class in the police academy, Judy faces discrimination by fellow officers who are significantly bigger and, typically, predatorial. In the course of a police investigation, Judy enlists the help of Nick Wilde, a fox who, like all foxes, is generally considered untrustworthy. The theme of prejudice is felt strongly throughout the movie and lends itself to interpretation along race and gender lines, common enough in stories of overcoming adversity. Still, Zootopia goes beyond portraying interspecies stereotypes to present instances of “prejudice,” such as when Judy’s police chief tells her, “It’s not about how badly you want something. It’s about what you are capable of,” or when Nick says to Judy, “You can only be what you are,” or when Judy herself suggests that biology might have an impact on behavior.

When statements like these are considered prejudicial and problematic, we are well beyond the political, well beyond even the physical. Here we have serious metaphysical concerns: what makes a thing to be what it is? The assessment of Judy’s police chief (the African buffalo pictured above), that our capacity stems from our nature regardless of what we might want, is perfectly in accord with an Aristotelian/Thomistic understanding of the world (hence the chief’s new attire). Not so for Zootopia. One of the cringe-worthier moments of the movie is when Judy tells a little fox that, if he wants to grow up to be an elephant, that is exactly what he should do. Telling someone she doesn’t have what it takes to exercise a particular function in society isn’t at all like telling someone he can’t make himself into a different kind of thing altogether, and yet they are treated as essentially the same. For Zootopia, any limit imposed on a person, whether it deals with a job or nature itself, is an instance of bigotry. On this view, flourishing is found in exerting one’s will over external reality, and forcing the latter to conform to one’s internal preferences.

In all fairness, there is nothing wrong with Zootopia’s aspirations. There is wrongful prejudice in the world that should be opposed. On an even more basic level, Zootopia taps into the natural desires of humanity to transcend itself, to exceed its limitations, and this desire is fundamentally good. Zootopia is dissatisfied with the state of the world as it is. As Judy quite eloquently puts it:

I thought this city would be a perfect place where everyone got along and anyone could be anything. Turns out, life’s a little bit more complicated than a slogan on a bumper sticker. Real life is messy. We all have limitations. We all make mistakes… no matter what kind of person you are, I implore you: Try. Try to make the world a better place.

We can all sympathize with wanting a better world, we all want to become better people, the question is how. Zootopia errs in supposing that we make our world and ourselves better when we fabricate a new reality. We can never quite change things as much as we would like. And the more we struggle in vain, the more violence we do to ourselves and our neighbors. The drive of modernity to remake the world has given way to widespread ennui in postmodernity. And the more we keep at it, the worse it seems to get.

We need not despair, however, nor need we settle for mediocrity and human finitude.

Enter THE RISEN CHRIST. With Christ we have a radically new way of relating to human weakness. Christ, “though he was in the form of God, did not regard equality with God as something to be exploited, but emptied himself, taking the form of a slave, being born in human likeness” (Philippians 2:6-7). It was in this very act of humiliation, going even as far as accepting an agonizing and ignoble death, that the Father “highly exalted him and gave him the name that is above every name” (Philippians 2:9). If we accept our life, our nature, our very being as a gift from God rather than a right to be exploited, if we accept our limitations as an opportunity to receive even more from God through grace, only then will we come to be like God himself, not as angels nor as any species other than what we are now. You can only be what you are. But you are capable of participating in the divine nature. And you couldn’t ask for more than that.

Image: Not So Dumb Ox