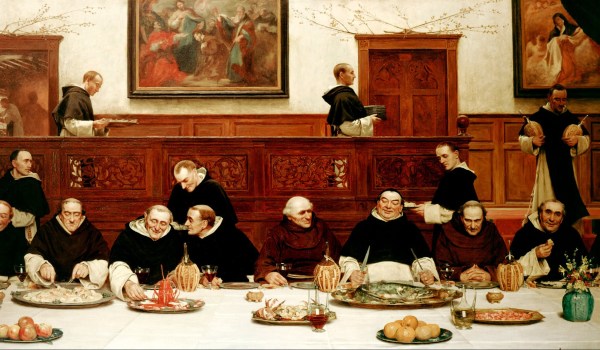 I recently listened to a public radio segment on CERN, the scientific research facility in Switzerland. I was struck by what the reporter referred to as, “the heart of CERN.” One might think it’s the laboratory or the complex scientific instruments used there. Turns out it’s the cafeteria.

The European Nuclear Research Center, also known as CERN, is home to the Large Hadron Collider. It’s a particle accelerator—a gigantic machine 600 feet deep and 27 miles long—that tests different theories of particle physics. Research at CERN has verified the existence of the Higgs Boson, also known as the “god particle,” a really really tiny particle that is predicted in Standard Model physics.

The reporter in the radio segment was highlighting a new aspect of CERN called “Collide,” an artist residency program intended to bring artists and scientists together to inspire each other with their respective modes of discovery. This is an exploration of something “even more elusive than the Higgs boson: human ingenuity, creativity and imagination.” This collaborative effort between the science and arts communities recognizes both the head and the heart as essential aspects of human enquiry. Scientists are teamed up with an “inspiration partner,” that is, an artist. They spend time together, learn from each other, and hopefully are inspired in some new way. And this engagement happens in a special way over a meal or a drink in the cafeteria where they can speak more informally about their work.

The assumptions in this project lend some credence to the ideas of the influential philosopher of science, Thomas Kuhn. He’s the guy who came up with the term “paradigm shift,” which has entered the vernacular. Kuhn questioned the strict objectivity of discovery in the hard sciences often touted by scientific positivists. Kuhn wanted to show that historical progress in science is not uniform. It cannot be boiled down merely to rational genius putting nature on the rack and extracting its laws. Other factors go into the discovery and acceptance of new and true scientific discoveries, or in changes of theory preference.

Kuhn claimed there are sociological, historical, and religious aspects that factor into revolutionary shifts in scientific consensus. At any given time in history there is a certain paradigm in which normal science is conducted. But this paradigm is disrupted in a period when revolutionary science takes place. This revolution usually consists in a discovery that drastically shifts scientific thought, such as the movement from the geocentric to the heliocentric astronomical model. Then the shift to a new paradigm settles, and normal science takes place once more but with new assumptions based on the change.

The emphasis on the arts at CERN is an implicit acknowledgment that artistic intuitions and aesthetics can help achieve scientific objectives. It encourages a collision of worldviews. On one hand you have scientists investigating the principles of physics, and on the other you have artists expressing the human experience through their particular medium.

Like the cafeteria at CERN, the refectory (our “cafeteria”) in religious life is also a place for the sharing of ideas. We too collide. Our brothers come from a variety of backgrounds. There are physicists, mathematicians, economists, philosophers, biblical scholars, software developers, musicians, biologists, engineers, and of course theologians. So though we all share a similar curriculum in our studies, we have different experiences we bring to our religious life. In the refectory, there are periods of silence (typically with a text being read aloud by a friar). And sometimes there is open conversation. It is especially in the course of conversation at meals that brothers bring their various background experiences to bear. As we discuss coursework, current events, and our ministries, we learn new ideas and insights from our fellow brothers. And it is often in conversation that some lofty philosophical or theological idea is distilled to its essence. We can learn what is at stake in a certain question through a ten-minute exchange. Or maybe a brother learns that he doesn’t in fact know what he thinks he knows. This can be an occasion for little paradigm shifts as we move from ignorance to truth through our discussions.

As students of philosophy and theology we formally investigate truth in the classroom and in personal study. And we take our study to prayer in the liturgy and meditation. But just like with the scientists and artists at CERN, this knowledge is also refined by our jovial, fraternal, and sometimes combative conversation as we collectively pursue the truth. We too integrate the head and the heart as scientist-friars and musician-friars (and many disciplines in between) interact on a daily basis. This fraternal exchange is actually an extension of the classroom. It is one thing to study a text (and this is important), but it is another to be enlightened by another person. The different friars at our house with their different areas of expertise make this possible. So in a way, our refectory table talk is just another aspect of the Dominican love of veritas.