Menu
Confraternity of the Most Holy Rosary > Uncategorized > Mothers and Martyrs 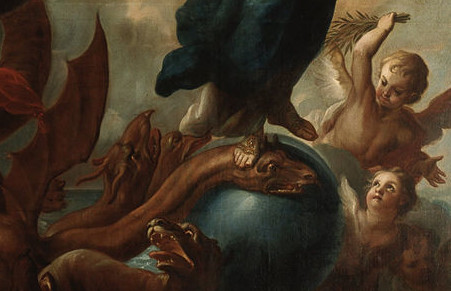 Days before her martyrdom in the year 203, St. Perpetua was granted this vision of her spiritual confrontation with that ancient serpent, Satan.

I saw a golden ladder of marvellous height, reaching up even to heaven….. And under the ladder itself was crouching a dragon of wonderful size, who lay in wait for those who ascended, and frightened them from the ascent…. And I said, ‘In the name of the Lord Jesus Christ, he shall not hurt me.’ And from under the ladder itself, as if in fear of me, he slowly lifted up his head; and as I took the first step, I trod upon his head. (from The Passion of SS. Perpetua and Felicity)

When Perpetua and her companions were brought into the amphitheatre as a spectacle for the crowds of Carthage, they despised the temptation to idolatry and joyfully embraced their deaths. The Passion of Saints Perpetua and Felicity does not withhold the gritty details in its descriptions, just as the martyrs themselves were not spared from suffering them in their bodies. But of all the truly glorious aspects of the Passion, few characteristics are more notable than the holy motherhood of the two matron-martyrs whom we celebrate today. While it is common for the Church to extoll the twofold crown of virginity and martyrdom, this account praises these saints in and through their maternity and martyrdom.

At the time of their arrest, Perpetua was still nursing her infant son, and Felicity was 8 months pregnant. Perpetua’s maternal instinct left her anxious for the care and nursing of her son until he was suddenly weaned and comforted. The alleviation of the need to breastfeed her child prepared her to be nourished by Christ at the Heavenly Banquet. Felicity was miraculously brought to childbirth 3 days before their appointed execution. Having given birth to a new life on earth, she was readied to be reborn into eternal life in Heaven. St. Augustine specifically emphasizes their motherhood in each of his three sermons in their memory. “In giving birth, [Felicity] testified with her woman’s voice to her woman’s condition. The punishment of Eve was not missing, but the grace of Mary was at hand” (Sermon 281).

In contrast to Eve’s presumption, the Virgin Mary’s humble obedience signifies a grace-filled reorientation of the human race to our loving Creator. God’s punishment that Eve would endure labor pains is not a condemnation to fruitless agony, but an act of His mercy such that mothers should share in the pains which bring new life—pains like Christ’s salvific Passion and Death which purchased new life for us. It was through the wiles and snares of the devil that Eve fell with Adam into original sin. It is fitting, therefore, that the Son of Mary, the New Eve, should readmit us as children of God through a triumph over Satan. And it is the immaculate Mother of God who is depicted treading upon the serpent, fulfilling the prophecy that you shall bruise his heel (Gen 3:15). Rejecting sin and embracing humility, Saints Perpetua and Felicity shared in this twofold blessing by imitating Jesus as martyrs and joining Mary as mothers.

So the dragon was trampled on by the blessed Perpetua’s chaste foot and victorious tread, when the ladder by which she would go to God was set up and revealed. Thus the head of the ancient serpent, which had been the ruin of woman as she fell, was made into a step for woman as she ascended. (St. Augustine, Sermon 280)

Perpetua, her babe taken from her breast, and Felicity, bearing the signs of recent pregnancy, gave their lives to God alongside their brethren before jeering crowds. They have stood now for over 1800 years as glorious witnesses to the faith, hope, and love that embolden all martyrs. Yet the particular power of their witness flows especially from the beauty of their motherhood: Perpetua tending to the needs of both her child and her fellow Christians; Felicity undergoing the agonies of childbirth mere days before her own birth unto eternal life. While no mother could forget her child, these martyrs abandoned all earthly hopes and entrusted their children to the Church. It is only the grace of God and the power of the Spirit which could have allowed these women to relinquish their motherly duties. But these mothers left their children the greatest gifts a parent can provide: a beautiful testimony of a love that conquers death, a model of magnificent sanctity, and an inheritance of grace stemming from their sacrifice.

The ladder of salvation, seen by Perpetua in mystical vision, is the very Cross of Jesus Christ. Her ascent, beginning with that “victorious tread,” was achieved through the fulfillment of her womanhood, through her motherhood. “The motherhood of every woman, understood in the light of the Gospel, is similarly not only ‘of flesh and blood’: it expresses a profound ‘listening to the word of the living God’ and a readiness to ‘safeguard’ this Word, which is ‘the word of eternal life’” (St. John Paul II, Mulieris Dignitatem 19, cf. Jn 6:68). The martyrdom of these women, then, can be seen as a consummation of their maternity and their discipleship. The daily sufferings and sacrifices of mothers, biological, adoptive, and spiritual, are the steps by which they trample the head of Satan and climb the rungs of the ladder to Heaven.

Image: Miguel Cabrera, The Virgin of the Apocalypse (detail)


Silence Please
In just a few short days, we will celebrate the Savior’s birth.  These are days we will most likely dedicate to working, planning, shopping, wrapping, prepping, cooking, eating, and cleaning.   For some, peace and quiet are all but forgotten between Thanksgiving and New Years’.  Sure, there are things we would like to get done and gifts which ought to get wrapped, but what is there to be done when we ourselves are wrapped up in these expectations…