Menu
Confraternity of the Most Holy Rosary > Uncategorized > Give Us Barabbas 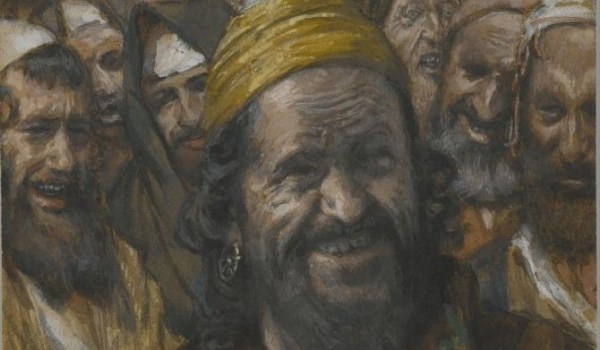 The familiar scene unfolds in our minds at least once a year: Jesus and Barabbas stand before the crowd in the praetorium. Barabbas the criminal is grunting about, egging on the crowd to cheer for him. He is nauseating in mannerism and appearance, and harder to look upon than even the bruised, scourged, bleeding Christ. As Satan weaves among the crowd, he urges all to chant, “Give us Barabbas!” They comply, but couldn’t really care less about the grotesque man. Ultimately, the cries have nothing to do with Barabbas, but everything to do with crucifying the man beside him, the one in whom Pilate found no fault.

Any given scripture scholar may prove me completely wrong in an instant, but perhaps there was something in the hearts of those in the crowd that really did want Barabbas. Perhaps he wasn’t the ugliest of figures, with the most monstrous characteristics, or the sloppiest of dispositions. Maybe his mission was somewhat appealing to people, so that in shouting for Barabbas, they weren’t just trying to crucify Jesus as the priests were, but actually wanted him. It’s as if they were shouting, “Give us back Barabbas!”

It’s worth remembering that early manuscripts of the Gospels as well as older translations of the Bible available today give the criminal’s name in full: Jesus Barabbas. The name ‘Barabbas’ means ‘son of the father’ (bar-abba). Further reflection may expose more similarities between Jesus and Barabbas in their missions, even if ultimately their projects are two lines that never cross, that follow different means to very different ends.

The real criminal is said to be “notorious,” one who may have tried to lead some sort of grand insurrection to liberate his countrymen from Roman rule. He may have seen himself as a messianic figure, a political one (and thus the more common notion of Messiah in his time). He would be the one who would bring real peace to the Israelites, not in the form of the Pax Romana, but one that freed Israel from alien force completely.

Jesus the Nazarene, called the Christ, Son of The Father, is then juxtaposed with Jesus Barabbas, the insurgent, son of the father. One claims an unseen kingdom not of this world, the other promises a physical kingdom here and now, as was expected. One was captured in a garden with followers that fled, the other fought for his cause before being overpowered by the same forces that were occupying their land.

The former demands self-denial, love for enemies, holding off personal vengeance, and care for the at times thankless marginalized. He praises the slave, the meek, the despised, the persecuted, the mournful, and the suffering. His way is narrow, and few there are that find it.

The latter is an immediately recognizable response to oppression. His followers need not concern themselves with authority, trials, objective formalisms, dogma, seeking and being obedient to one truth, or conformity with another’s standards. His way is all encompassing, all welcoming, tolerant, liberating, easy; and all who want freedom ought to follow it.

Is there any difficulty, then, in understanding why the crowd would want Barabbas?

Would it be hard for us to say on any given day who we might shout for?