Menu
Confraternity of the Most Holy Rosary > Uncategorized > The Reluctant Ruler 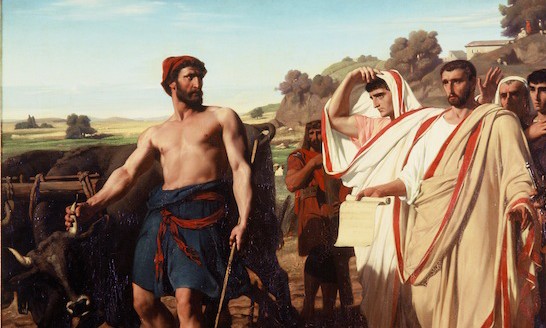 The most improper job of any man, even saints (who at any rate were at least unwilling to take it on), is bossing other men. Not one in a million is fit for it, and least of all those who seek the opportunity. – J.R.R. Tolkien

It’s very easy to have a distaste for the current political races in our country, most notably the presidential campaign season currently underway. Straight talk and attractive slogans aren’t bad in themselves, but there seems to be a deeper disorder under the salty surface.

This bad bloom of a situation has its roots in a particular vice: self-touting. This is the naked ambition for high office wherein one begs for approval. Self-touting goes against human nature, leads to a degradation of the human person, and subsequently drags down human society.

Human Nature and the Republic

In Plato’s vision of a good republic, he condemns those who seek to rule other men, comparing them to mutinous sailors. He also decries something that applies today as much as it did then: the courting of the rich by these ambitious beggars.

The pilot should not humbly beg the sailors to be commanded by him—that is not the order of nature; neither are “the wise to go to the doors of the rich”—the ingenious author of this saying told a lie—but the truth is, that, when a man is ill, whether he be rich or poor, to the physician he must go, and he who wants to be governed, to him who is able to govern. The ruler who is good for anything ought not to beg his subjects to be ruled by him.

Plato rightly points out that this ambition is a sickness, one against the very nature of the human person. Of course, Christian humility makes even higher demands on public servants, but everyone can recognize the illness present in those who are constantly self-promoting and self-canvassing. Instead of potential leaders, the candidates appear as panhandlers.

The Civic Virtue of Cincinnatus

The lessons of the founding of this country are lessons for today. The idea that America has some intrinsic quality that makes it better than other nations is hard to justify. Rather, the successes of this country have their roots in moments of extraordinary civic virtue. It’s not simplistic to say that the American archetype of this virtue is the founder and first leader of this country, George Washington. As is well known, he rebuffed popular opinion and refused to become king of a new realm. Rather, he accepted a system where he would be held accountable to the people and to the other leaders around him.

Most notably, he stepped down after two terms in office. This event helped create a new style of government and a new nation via the peaceful transition of the highest power. No death, no blood, no exile. Washington realized his time of service had ended, and he willed to re-enter society as a mere citizen. This earned him the nickname “Cincinnatus” after the 6th-century B.C. Roman aristocrat and farmer who was called on to serve as dictator but resigned after he had successfully executed his duties.

The Birth of Bad Campaigning in America

In 1896, the populist William Jennings Bryan began traveling around the country, giving hundreds of speeches to crowds in over 27 states. Conversely, William McKinley, his opponent, conducted a “front-porch campaign,” where people would come to hear him speak at his home in Ohio.

Although Bryan lost, his frenetic attempt to garner votes as well as his support of a more “one person, one vote” approach to democracy became the future of American presidential campaigns.

Not only is this nearly perpetual campaign in motion today, but it has come to be extended by binding popular-vote primaries (which only began in earnest in 1972) and by an increasing emphasis on the person versus the platform. (And of course, the 24-hour news on television and social media compounds this problem exponentially.)

The principles of solidarity and subsidiarity in Catholic social teaching show that while the rights of the individual should be respected, there is a limit to an ordinary citizen’s competence in governing. For instance, a citizen can know a delegate from his district, but one person cannot be known well by 300 million people. That is why there are such things as party delegates, an electoral college, and other forms of representative governance. The citizen chooses someone he knows will represent his principles, and that representative helps choose one who can govern according to those principles.

More importantly, the ability to vote depends on civic virtues and basic civic education. Without these, democracy tends toward mob rule. Instead of a mass media “civic education” once every four years that enables the shiniest candidate with the best promises to win, Americans need to learn about civic rights and responsibilities, the common good, and how to serve their neighbors for the upbuilding of society.

For instance, in the Dominican Order, there are elements of democracy and representative governance—which date back to its founding. However, there is a counter-balance: a friar may not campaign, nor even vote, for himself. Leaders are chosen based on the virtues that others see in them.

Democracy is a powerful form of government that can protect people from being disenfranchised in society. Yet like all things powerful, it must be restrained and channeled effectively—in this case through civic virtue, good laws, and balanced forms of representative governance—lest it destroy itself.


The Scrupulous NFL
In the NFC Divisional thriller between Green Bay and Dallas, the player of the game wasn’t #12 of the Packers, Aaron Rodgers, who valiantly fought through injury, nor was it #9 of the Cowboys, Tony Romo, who battled doubters about his ability to win the big game. Rather, it was Rule 8, Section 1, Article 3, Item 1 of the NFL Rulebook. This incredibly complex definition of a catch, situated in the labyrinthine code of NFL law, overturned a miracul…