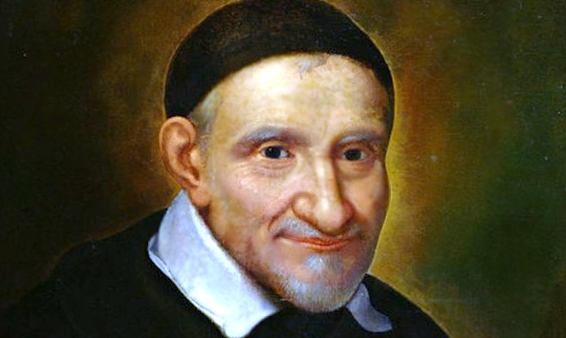 This summer, I have been working in Youngstown, Ohio, at the St. Vincent de Paul Society Soup Kitchen. Each day, we feed about 200 of the poor in the city. Some are homeless, some have been abandoned, some are sick or disabled, but all of them need mercy, and all of them are beloved of Christ. This is something St. Vincent de Paul can show us, something that came to be the center of his life.

St. Vincent de Paul was born in 1581 to a peasant family in Gascony, France. He was taught by  Franciscan Friars, and then after theological studies at the University of Toulouse he was ordained a priest in 1600. Five years later, in the course of a journey off the southern coast of France, he was captured by pirates and was brought, a slave, to Tunis, near Carthage on the northern coast of Africa. He escaped from Africa in 1607 along with his master, who had turned to the faith by the witness of this young Fr. Vincent.

After further studies, Vincent gained experience as a pastor and as a spiritual director to noble families in Paris. Throughout these years of ministry, as he grew in love for Christ and for the poor, he began what would become the mission of his entire life: service to the poor. He founded a priestly congregation devoted to evangelizing the countryside by preaching missions to the poor. He established and oversaw the Confraternities of Charity, an organization of laypersons that worked to provide for the poor. With the help of Louise de Marillac, a religious community of women, the Daughters of Charity, was founded. These women devoted their lives to performing works of mercy. In later years, St. Vincent was even appointed to the Queen’s Council of Ecclesiastical Affairs, where he could direct assistance to the plight of the poor.

St. Vincent was a man who had experienced for himself the hardships of poverty and slavery, but who had also seen the misery of those who do not know God. As he grew in love for Christ, this love overflowed unto the poor whom he found everywhere. Thus he focused his work on serving their needs and led others to do the same.

All of this was in imitation of Christ. Jesus loves the poor deeply; he even presents his mission as a ministry to the poor: “The Spirit of the Lord is upon me, because he has anointed me to preach good news to the poor” (Lk 4:18). This leads us to ask ourselves, as we are disciples of Christ and seek to imitate him, “What does it mean to love the poor?”

Charity upholds and purifies our human ability to love, and raises it to the supernatural perfection of divine love. (CCC 1927)

When the Holy Spirit pours this love into our hearts (and we cannot have this love without the Holy Spirit), we love as God loves. We love God for himself, and we love our neighbors because they are called, intended for life with God, because God loves them.

This is the kind of love at issue when Christ says, “Truly, I say to you, as you did it to one of the least of these my brethren, you did it to me” (Mt 25:40). St. Vincent de Paul, as he was transformed in love for Christ, was transformed also in love for the poor. He was united to them not only in having experienced want and insecurity for himself, but also in the depths of his love of God. Because of the love poured into his heart by the Holy Spirit, he preached and provided for the poor out of his consuming love of Christ. He knew that every act of mercy, generosity, and love for the poor can be done for Christ. These were the roots of his charity, and by the grace of God, these can be the roots of our charity as well.