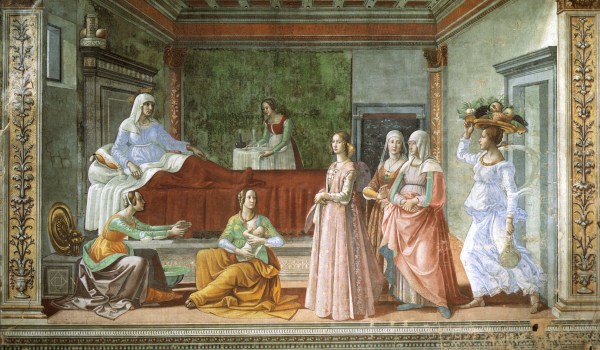 Today, the Church celebrates the Solemnity of the Nativity of St. John the Baptist. John the Baptist is part of an elite company (with Jesus Christ and the Virgin Mary) whom the Church honors the births of in Her liturgical calendar. Typically, a feast day commemorates the entire life, work, and death of a saint (the Church celebrates the death of John the Baptist on August 29th). While in those feasts we honor the work that God has accomplished through a specific saint, celebrating a birth is somewhat different. We celebrate the gift that they are to the world before they have even taken their first breath outside the womb. We honor the power and providence of God, working through other individuals, which brought about such a figure in our world.

As a whole, celebrating birthdays is rather an odd idea. After all, no one has ever had any say in the matter of his own birth. It is a celebration of an unmerited event. We honor people simply for their continued existence. Furthermore, celebrating the birthday of someone who has died is a far stranger thing altogether. In the Church, “birthday parties” occur only when something decidedly different occurred in history. For the Nativity of the Blessed Virgin Mary, we honor the first person to be born without the stain of original sin. At Christmas, we celebrate the birth of our incarnate Lord and the salvation He came to bring. However, the birth of John the Baptist does not seem to be as directly significant.

Why is it then that we celebrate it as a solemnity, the Church’s highest category of feast day? I can think of three reasons that his birth is so significant for the life of the Church: the closing of the prophetic age, the miraculous nature of his birth, and his work of baptizing and calling to repentance. In these three ways, we honor a saint who neither chose to be born nor was conceived by supernatural means. His birth is a reminder of the great gift of all of our births and the life we have received.

First, John the Baptist is the last and greatest prophet to be born. It was Christ himself who marked that there was none greater born of woman than John the Baptist (Luke 7:28). He was the last man born who prophesied about the coming of the Messiah and the need for repentance. For centuries, God had prepared the world through the Israelites for mankind’s salvation. John is the last in line of these great men and women who sought to turn hearts back to the Lord. In honoring the birth of John the Baptist, we honor the work that God accomplished through all of his prophets until the birth of the Messiah.

Second, his birth was in some sense miraculous. An angel had appeared to Zechariah to announce the birth of one who would be great in the sight of the Lord. Despite the age and barrenness of Zechariah’s wife, Elizabeth, a child would be born in order to help bring back many of the Israelites to the Lord God. However, unlike the birth of his cousin 6 months later, it seems that John was conceived by natural means. The miracle of his birth is in the Lord taking away Elizabeth’s barrenness and in the message of the angel to Zechariah. Yet, like us, John had no say in the matter. However, his birth is still a gift. Today, we honor the great power and plan of God in bringing about the birth of John.

Finally, the work of John the Baptist is indelibly linked with the greater idea of birth. He had called the Israelites to repentance and had baptized many, albeit in a way different than the Christian sacrament. His baptism prepared the world for the coming baptism and rebirth that Christ brought. In our own baptism, we are reborn into Christ. John prepared the world for this in his own work. While he himself could not bring about rebirth into Christ, in God’s plan one would come after him whom he was unfit to loosen his sandal. The fulfillment of John’s message was outside of his power, but points to our own rebirth.

In conclusion, it seems most fitting to celebrate the birth of such a man. In doing so, we honor the continued guidance of the Israelite people through the prophets, the miracle of John’s birth, and the new birth that he called the Israelites to embrace. While John the Baptist did not plan his birth or plan the work he would undertake, we can still honor the providence that ordained these things to be accomplished through him. In doing so, we are directed to honor God’s providence in the world and the person of Jesus Christ whom John the Baptist came to announce.