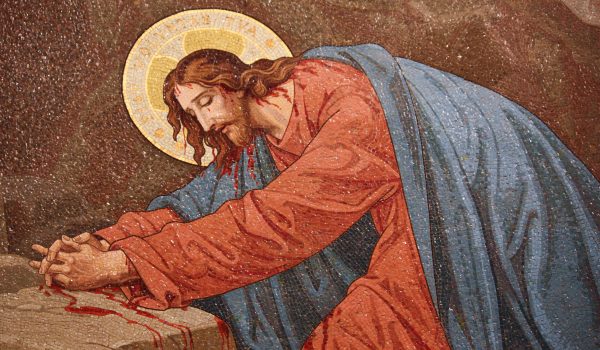 Br. Joseph wrote about offering it up and relaxation a few weeks ago. My consideration today will focus in a little bit more on hardships offered up.

Maybe you heard your parents or grandparents use the classic Catholic expression “offer it up”. But what does it mean and how does it work? It’s not a command to “be tougher” or to “feel less pain” or “to not cry.”  It’s the way to give suffering some kind of purpose.

Hospital work affords plenty of occasions to be with people in their sufferings. Sometimes patients are stoic (or evasive) and they say that other people have it worse. Or they simply narrate the whole complex medical and financial history in an attempt to have someone understand. But the truth of the Cross and the dignity of suffering are rarely understood. And when “offering it up” is understood, it is not usually by those with licenses in pastoral counseling, but by ladies with rosaries. It is, in short, the Cross of Christ that gives suffering value.

The intensity of pain (physical, spiritual, emotional) is horrible all on its own. But more horrible can be the seeming worthlessness and futility of it all. These things are happening to me, to my father, to my sister, and I don’t know why. They’re happening and I’m passively enduring them. Yet Jesus Christ did not passively endure the agonies of the crucifixion. He offered them for the salvation of the whole human race. And he gave us the power to join in that work. St. Paul says, “I fill up in my body what is lacking in the suffering of Christ.” The sufferings of Christ are not deficient. But there are many people who don’t yet love Christ and His Church. Many are unreconciled to the Father. And that’s where we with our sufferings come in. We extend the victory of Christ on the Cross by “offering it up.” We can now do something with our pain, even though that pain may not itself be diminished.

In the action of “offering it up,” the Cross of Christ is like a desalination plant. Whereas salt water is useless for drinking, desalination plants are those massive complexes in Australia, Israel, California and other locales where salt water is changed into fresh water. Suffering is like salt water when you don’t have the Cross of Christ. Such suffering can seem useless. But Christ’s Cross turns this salt water of suffering into the fresh water of grace for other people. There are so many conversions that come as a result of such petitions. And it’s usually small matters that get offered up. We sit in traffic on the expressway and utter a not very eloquent prayer, “Well, Jesus, this is pretty unpleasant and I’m getting more aggravated by the moment just sitting here. So I’ll offer up the next hour of irritation so that my best friend from college comes back to church.”

And now a note to those who have been doing this for a while and it hasn’t seemed to work. Your 21-year-old has not gone to Mass in three years. Instead he’s reading Richard Dawkins and Jean-Paul Sartre, and living with his girlfriend. Don’t despair. The story is not over yet. You don’t see the end of his road. St. Monica prayed for her son St. Augustine for many years before he came to the Lord. But then look at what God did with him. He made him one of the greatest saints of early Christianity. And God made him the cause of many conversions: think of all those people who read The Confessions every year and are moved to tears of repentance.

Without the Cross, St. Monica would have been just another fretting and nervous mother. Instead she placed on the Cross of Christ all of her anxiety, fear, and desire to protect her son. She took up her Cross daily and offered it for her son’s salvation. The saltwater of her tears became the water of grace that God used to soften the heart of her wayward son. God gives us the gift of being able to do likewise.