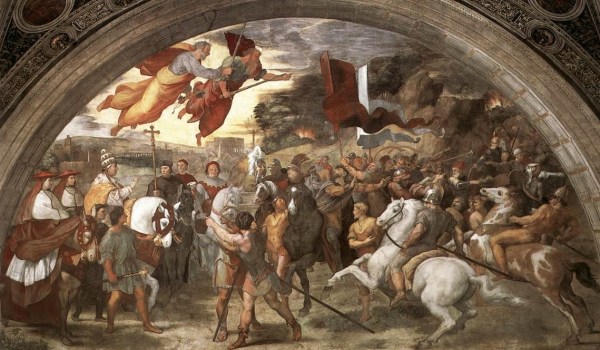 This was not in his job description.

For five centuries, the Romans marched from strength to strength under the banner “Senatus Populusque Romanus.” Even under the Emperors, every commission, whether architectural or military, was undertaken in the name of the Senate and People of Rome (SPQR for short).

By Pope Leo’s time, this tattered banner began to retreat in both East and West. Rome no longer dictated terms. At best, she accepted them. At worst, she begged for them. With Attila the Hun breathing down Rome’s neck, begging was certainly in order. And ready for the challenge was Pope Leo.

Chosen as Supreme Pontiff while away in Gaul, Leo was regarded as an accomplished diplomat, and rightly so. Yet, in this case he had a weak hand. Leo was prepared to petition as a lamb, but he was no fool. Peter’s successor eschewed the standard playbook, petitioning for peace with appeals to Attila’s forbearance rather than Rome’s power. The same “SPQR” banner that emblazoned the advancing legions of Caesar now appealed to peace rather than war.

Pope Leo took this assignment because he regarded Rome and her empire as a providential vehicle for the triumph of the Faith, but he (like St. Augustine before him) was under no illusions concerning her troubled past, beginning with her very founding by the fratricidal Romulus. For the saints, prudence (and authentic piety) trumps patriotism: the greatest “kingdom in the history of the world” belongs to the Kingdom of Heaven, not the empire of Rome. And so, in riding out to confront the imposing Attila, he placed his confidence not in horses or intrigue, but on a more secure pledge. His secretary described Leo as “trusting in the help of God, who never fails the righteous in their trials.” His mission would not reprise the subtle dodges of the past, which redefined defeat as victory and vassalage as lordship. He was content simply to dissuade Attila from sacking the peninsula, without challenging the barbarian’s delusions of grandeur and permanency. Even as Attila threatened—promised—that he would return, Leo had the sense to see through the empty pomp such earthly power provided. And how right he was: Attila never made good on his boasts.

But not all are as easy to negotiate with as barbarians. For Pope Leo, some of the biggest headaches came from his brother bishops. There was Nestorius, who had been deposed based on his gravely distorted views of the Incarnation. But his heresy was by no means the only one: there were others who framed their theology in response to Nestorius, arguing against his radical disjunction (in operation) between Christ’s divine and human natures. For these other thinkers, Christ had to be united, God and man, in a single nature. If this sounds problematic, that’s because it is. In Christ, one can say poetically that heaven is wedded to earth, and the divine to the human, but, in reality, they are not blended or confused in Him.

This issue may seem less important to us than barbarians rampaging through Italy, but not to Pope Leo. For him, acting on our behalf before Attila was significant, but was slight compared to anchoring our understanding of Christ, God become man. For on this mystery hangs the nature of our salvation:

To pay off the debt of our state, invulnerable nature was united to a nature that could suffer; so that in a way that corresponded to the remedies we needed, one and the same mediator between God and humanity, the Man Christ Jesus, could both on the one hand die and on the other be incapable of death. Thus was true God born in the undiminished and perfect nature of a true man, complete in what is His and complete in what is ours.

Leo is called Great in large part because he saved the city of Rome on two separate occasions. But far more noteworthy is his work safeguarding the Roman and apostolic faith from the confusion of so many different figures. Since Christ as perfect Man reveals man to himself (concerning which Vatican II reminds us in Gaudium et Spes §22), understanding Christ’s dignity is essential for recognizing our own as restored and elevated in the grace He has won for us.

Preserving and transmitting this teaching does not usually oblige us to face the barbarians at the gates. In the face of those who would obscure the truth, our call—Pope Leo’s call—is to put on what St. Paul calls “the mind of Christ.” Embracing what we ourselves have received, we can be tailored to His understanding of us, rather than our conjectures about Him. There are only two choices: we can either remember Him Whose members we are in the Body of Christ, or slide into the grave danger highlighted by John Courtney Murray, SJ:

Self-understanding is the necessary condition of a sense of self-identity and self-confidence, whether in the case of an individual or in the case of a people… Otherwise the peril is great. The complete loss of one’s identity is, with all propriety of theological definition, hell. In diminished forms it is insanity.

As to insanity, some would say riding out to meet a barbarian without an army fits the bill. But knowing himself, and the One who called him, Pope Leo could ride out to Attila, confident that the Hun’s efforts would amount to an empire built on sand, a mass of broken lives, and a brief (but memorable) footnote in the textbooks.

Image: Raphael, The Meeting of Leo the Great and Attila