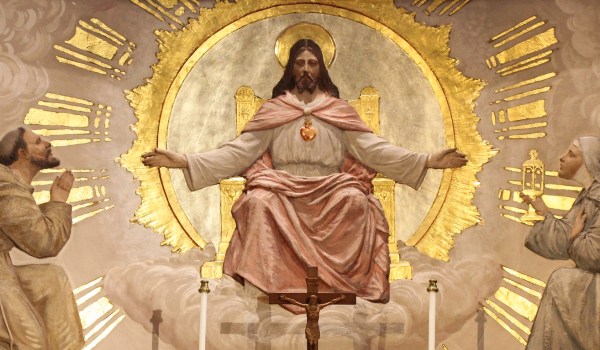 Editor’s note: This post is dedicated to Fr. Sylvester Willoughby, O.P., a much beloved friar of the Dominican House of Studies. At the time of publication, Fr. Willoughby is gravely ill and close to death.

For a while I hoped the relatively steady beeping would simply fade, peacefully, into the background like the ticking of a clock, but it was not to be. It was just irregular enough to draw my attention, and I couldn’t stop reflecting on what the irregularity signified. It didn’t help that I had been pondering the profundity of heartbeats for days when I unexpectedly found myself on the 4:00 am shift, keeping vigil in Fr. Willoughby’s hospital room. That heart, which had served him so diligently for 94 years, was stumbling, as the monitor made plain every time its rhythm stuttered.

A few days prior, I had reread On the Motion of the Heart, a brief work by St. Thomas Aquinas. There he addresses a concern that the motion of the heart does not seem to fit into the usual taxonomy of bodily powers and seems to be unnatural, fighting against itself by repeatedly pushing and pulling instead of moving smoothly to some place of rest.

While I do sometimes pick up random works of Aquinas on a whim, I only revisited this one because I was reading another, seemingly unrelated text by Thomas in which he describes the new creation after the second coming of Christ. Although there are many aspects of these discussions that are rooted in the flawed details of his cosmology, it is intriguing to see both the theological principles he lays out for the resurrection of the body and the way he applies Aristotelian natural philosophy in a context its originator would never have conceived. In this case, I was trying to get my head around the nature and experience of time after the resurrection and had hit a snag on the question of how to measure that time.

Since you don’t want a watch whose second hand jumps sporadically, the best tool to measure time is the one that is the most uniform. Aquinas thinks that all time in the present order can be measured by the motion of the Primum Mobile, not because it is the principle of all motion but because it is the simplest, most consistent, and quickest motion in his cosmology. Not only does this make the Primum Mobile a useful tool, but as the absolutely simplest motion with no equal, it also ensures that there is a unity to all measurements of time, as they can each be referred back to it.

The snag I hit is that Thomas asserts that while there is plenty of motion going on in the new creation, as the blessed will move about and explore the glorious new Earth, the heavenly bodies will stop. With no heavenly motion, is there any motion that can be identified as uniform and consistent, that by which all others can be measured? A tangential reference at the end of a long list of objections pointed me to the motion of the heart.

With the real Primum Mobile gone, the imperfect imitation seems the next best option. Further, many of the imperfections of the heartbeat will be overcome in the resurrected body, especially for the blessed whose glorified bodies will be perfectly ordered to their souls. Of course, there will be as many heartbeats as human beings in the new creation, namely, one for every person who has ever or will ever live. Does one heartbeat stand out above the rest as the simplest, the most perfectly consistent and uniform? The obvious candidate is the one that belongs to Jesus Christ himself, he who has every bodily perfection to an eminent degree. I found this strange idea—that the heartbeat of Christ will be the principle of unity for all time in the new creation—a fascinating one, linking obscure philosophical speculation to the venerable tradition of devotion to Christ’s human heart.

These thoughts about the perfect heartbeat of the resurrected Christ were a stark contrast to the faltering rhythm in that hospital room. It was even worse when I returned later that day, as any sign of consistency had vanished. As his heart strained itself in a sporadic and inefficient arrhythmia, it was clear that it could not keep going that way for long. Sometime soon his soul would finally be stymied by the weakening matter it had known for so long, and depart. Still, I take solace in the hope that one day, after his soul takes some time away from the corporeal order, Fr. Willoughby’s heart will once again— and even more perfectly—imitate the heart of his Lord, not simply in its motion, but in its love, that charity he spent his long Dominican life sharing with others.