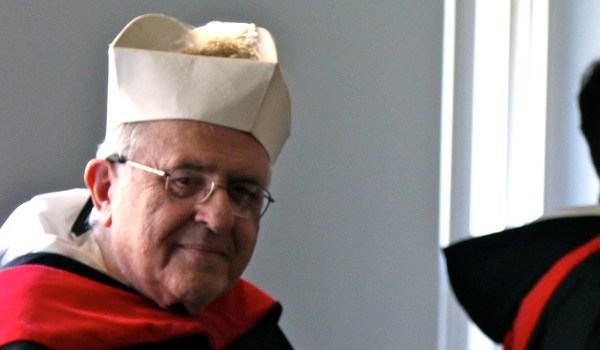 Editor’s note: This is the second post in a series that honors the religious lives and fidelity of several of our Jubilarians as part of our celebration of the 800th Jubilee of the Order of Preachers.

The 750th anniversary of the Dominicans in 1966 saw the ordination of the young Fr. Basil Cole in San Francisco, and now the 800th anniversary sees him teaching full-time in Washington, D.C. Over these five decades, he has been a religious superior, a traveling preacher, an author, and a professor. I first met him because he was my superior at the novitiate in Cincinnati, and my class made our simple vows in his hands. Since then he has returned to Washington to teach, and I had him for a class last semester. Wanting to learn more about his life as a Dominican, I interviewed Fr. Basil this summer. What stood out most is that through his varied career, marked by responses to the needs of his Dominican brothers and of the Church, his life has been unified by what he calls “the grace of the contemplative preacher.”

Fr. Basil was born in San Francisco in 1937 and grew up in the Catholic school system there. As the only child of Burr and Lucy Cole, both medical professionals, he was well provided for and showed a special interest in music. Now at special celebrations at the House of Studies, we brothers and our guests enjoy hearing his jazz piano skills. In college at the University of San Francisco, Fr. Basil studied English literature and thought about being a high school teacher. By the time he reached graduation, though, he was more interested in religious life.

Driven by this desire, Fr. Basil visited the Benedictine seminary in Mt. Angel, Oregon, for a three-month stay. He did not feel a call to the monastic life, and instead he became interested in the Dominicans. Ironically, it was a book criticizing the Dominicans that motivated him. He realized that the shortcomings in St. Dominic’s Order are due to the height and difficulty of the ideal it pursues, an ideal which was worth sacrificing himself for. So he wrote to apply to the Dominicans and moved back to San Francisco to study Latin while he waited.

Fr. Basil entered the novitiate in 1960, and he reflects that “the novitiate was a purifying year for me.” One work in particular, Jean-Pierre de Caussade’s Abandonment to Divine Providence, helped see him through. In it he found how God works through the painful moments of our lives as well as the delightful ones. Each moment is an opportunity for receiving grace, and staying open to the grace of the present hour gives us the possibility for sanctity here and now. This insight not only helped Fr. Basil through his initial formation, but it also became a theme in his later teaching of theology.

After being ordained to the priesthood in 1966, Fr. Basil finished two theology degrees at the Saulchoir in France. He went back to the Bay Area to start ministry, first at a college campus and then teaching religious sisters. But his brother Dominicans had a different idea for him, and in 1970 he was made prior (religious superior) of St. Dominic’s in San Francisco. This started eight years of being a superior, five in San Francisco and three in Los Angeles. The 1970s were a turbulent time in the Catholic Church at large, and some of these problems were reflected on the local level. Fr. Basil says, “There was radical dissent in the Church from received moral norms. In the Order there were many changes in the Constitutions, and adapting to those was not easy for all.” But he tried to keep the peace by a spirit of collaboration with his brothers, and he was able to ensure that Dominican life continued.

In his last three years as a prior in Los Angeles, Fr. Basil discovered his vocation within a vocation, being a parish mission preacher. He began because of his brothers’ needs: the community ran a high school and did not have enough income to support itself. So Fr. Basil preached parish missions in LA as often as he could for three years.

After his term as prior, he joined the Provincial Mission Band (a group of friars who preach missions, novenas, etc., under the direction of a head preacher, the caput) full-time from 1978–1985. Fr. Basil was a popular and successful preacher, and he did not envision leaving this line of work. But the Holy Spirit can work through friendships and the needs of others, and this was how Fr. Basil’s teaching career began.

Initially a Dominican friend invited him to teach moral theology at the Angelicum in Rome, and after obtaining permission and preparing well, he taught for a single semester in 1985. After this foray into teaching, his superiors wanted him to return full-time to preaching. Fr. Basil accepted this decision and returned to California, ready to go where he was most needed. But he did enjoy the semester of teaching, and he was happy when his superior later reconsidered and allowed him to return to the Angelicum in 1987. However, in order to keep preaching on the mission band, he would only teach in the fall. This worked well for over a decade, allowing him to exercise his gifts as both preacher and teacher while traveling back and forth between Rome and California.

In 1989 the dean at the Angelicum suggested to him that he write a doctoral dissertation, and by 1991 he had completed and defended it. His dissertation was to become a book, Music and Morals. Even before this, he had published in 1990 his well-known book on the religious life with Paul Conner, O.P., Christian Totality. Fr. Basil reflects that he came to the writing apostolate not because of academics, but because of his preaching and his recognition of needs in the Church. He remembers, “I started to write articles first, and later co-authored Christian Totality because there was a dearth of theological literature on religious life.” Writing books and articles was simply another way for this itinerant preacher to spread the Gospel.

In 1995, fraternal concern again prompted a major change in Fr. Basil’s life. The Dominican House of Studies in Washington, D.C., was going through a major transition and needed a moral theology professor. At the request of the DHS dean, Fr. Basil asked his superior if he could teach in Washington. He was drawn by the need of the faculty and also by the possibility of teaching past age 70 (unlike in Rome, which has a mandatory retirement age). And so Fr. Basil arrived at DHS in 1998, and with few exceptions—such as his time in Cincinnati—has been here since.

In recent years, Fr. Basil has taught courses on topics ranging from bioethics to the angels, and he is still going strong in 2016. He publishes articles regularly, gives parish missions, conducts retreats, and is working on a book on the interaction of the vices according to St. Thomas Aquinas. By his own estimation, Fr. Basil was only given ordinary gifts. But with hard work and a particular Dominican grace, he has labored faithfully in the Lord’s vineyard. We younger friars look to him as an example of what a contemplative preacher can be, and we hope that we will respond with the same alacrity to the needs of the Church.

Image: Fr. Basil at the graduation of his students, wearing his academic biretta.

Br. Norbert Keliher entered the Order of Preachers in 2012. He is a graduate of Harvard University, where he studied Latin and Greek. Before entering the order, he spent a year teaching in New York City and a year studying theology at Notre Dame.On DominicanFriars.org