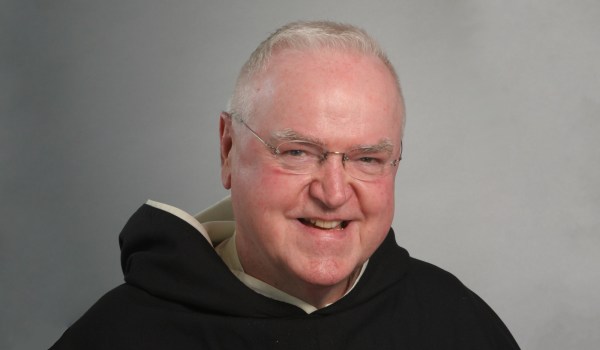 Editor’s note: This is the first post in a series that honors the religious lives and fidelity of several of our Jubilarians as part of our celebration of the 800th Jubilee of the Order of Preachers.

Fr. John Farren is a Dominican friar because he was a good delivery boy. Not in the newspaper sense—though the three Farren brothers did deliver more than one million copies of the Boston Globe during their boyhoods, enough to merit them a photograph and feature story in the Globe itself when Fr. Farren, the youngest of the three brothers, finally retired from the route. Farren’s father charged him one evening with a new task: deliver his younger sister Mary to her new Catholic school. As part of the task, Farren himself would be enrolled as well. With the principal qualification that he was an able-bodied escort, eighth-grader John Farren first met the Dominican Order through this providential decision.

The sisters who taught at the school shocked Farren at first. Who did these nuns think they were? Nuns are supposed to wear black! The stark white habit made a powerful impression, as did the women who wore them. Farren excelled in class and soon became involved in the school newspaper. It was the moderator of the journalism club, Sr. Francis, who asked him one day during his senior year, seemingly out of the blue:

“What are you talking about?” he asked, incredulous.

“The application for the Dominicans, of course!”

“The application … no! Where did you ever get that idea?”

To hear Fr. Farren recount the conversation, one might well presume that he added “you’re crazy” under his breath right afterwards. Of course, the seed of the idea was planted, which may have been Sister’s plan all along. Either way, Farren soon found himself entering the Order of Preachers and beginning his formation for the priesthood.

Farren submitted his application in 1955 and was ordained a priest in 1964. In the intervening years, he went through an intellectual formation in the traditional scholastic style: courses taught in Latin, taught from St. Thomas Aquinas’s Summa Theologiae, with oral examinations at the end of each course.

After his ordination, Farren finished his doctorate, but he notes that he soon began to chafe at the strict atmosphere. As the ferment of the 1960s increased, the seemingly arcane and irrelevant questions that had preoccupied his studies lost all savor for him. What was relevant to real people? What spoke to their concerns? Farren became increasingly involved in anti-war activism and interested by questions of liberation theology. He began carrying Chairman Mao’s Little Red Book in his habit pocket. What accounts for this onset of radicalism, which seems to differ so strongly from his background and the man’s later life? “There was a dynamic expectation that things would somehow be different. One friar put it this way: all these issues, these long-held debates, these stale controversies—they’re like weights piled up on my back, and they’ve got to come off! That’s very much how I felt. Besides, you really have to see that this stuff doesn’t work—the human misery and agony and mistrust produced by socialism.”

Soon enough, he asked to be assigned to Peru to assist with a Dominican mission there. The friar in charge of studies at the time was reluctant, saying, “We didn’t spend all this money on your education for you to hand out soup to Peruvian orphans.” Farren assured him that he’d likely be back teaching within a year or so—though he notes wryly that he had no intention of doing so.

It is when speaking about his five years in Peru that one hears most clearly the regret in Farren’s voice. “I was much more involved in the human than I was in the faith. I was delinquent in teaching the faith. I hope my words were not destructive of anyone’s faith, and I hope I set a good example. But I was so preoccupied with getting people to take their lives in their own hands and do something to change things—that I didn’t preach the faith.”

At the same time, he speaks powerfully of how God used him during this time as an instrument of His mercy, and the power and depth of that reality. He describes praying, in halting Spanish, with a dying man and his family over several days, and giving the poor man what few words he could to help him speak to God. “We prayed every day, and I could see every day what was happening in this man—forgiveness of a lifetime of gross injustices, getting ready to die. To do so with a peace, a serenity, reconciliation with God. The idea that God was using me, and my words—it’s just: wow! That perception, that kind of awareness of what happens through the ministry of preaching, leaves me awestruck. Why should God ever think of using me to accomplish such grace, such transforming miracles? That’s just beyond me. It leaves me truly speechless.”

Eventually, he reached another inflection point: instead of accepting an invitation to teach liberation theology for the Maryknoll Missionaries, he was asked by the Master of the Dominican Order to become one of his assistants for the worldwide apostolic life of the Order. Thus began another chapter in Farren’s life, and a chance for him to get to know the Order of Preachers from a whole different perspective.

Between that job and a later job working for the Roman Curia in the 1990s, Fr. Farren has been in more than fifty countries. He observes that he’s learned what it is to be welcomed, and what it is to be merely tolerated. Some people in the Order are crazy; some are saints; most everyone is trying to do something effective for his people. “After 800 years, that’s no small trick!” he observes.

What is the Order all about? “The Order exists to put to people the truth of God’s love in a way that is credible, in a way that is directly and really related to their struggles, and in a way that makes sense. Not just a series of pietistic or moralistic exhortations, or pie-in-the-sky optimism, but in a much more substantial, flesh-and-blood incarnation of God’s mercy.” This, he observes, is one of the reasons Dominic wanted an order of priests: preaching is so closely linked to a sense of God’s mercy and forgiveness that if the preaching is any good, people will want to go to confession afterwards!

In the decades that followed, Farren has been called on time and again to serve the Dominican Order and the Church in times of stress and consequence, especially for the work of priestly formation and the renewal of religious life. He was twice elected prior (religious superior) of the Dominican House of Studies in Washington, D.C., during difficult years of transition in the late 1980s. He stepped in as rector of St. John’s Seminary in Boston in the immediate aftermath of Cardinal Law’s resignation in 2003 in the midst of the sex abuse scandals.

Why is Farren so often called upon in these situations? Perhaps it is because he articulates so clearly the following vision: an institution forming young people for the religious life or priesthood must be credible, noble, and worth investing their lives in. At its heart, it must be a place where they can live seriously before God—and that means creating a place of real prayer. “Prayer is the perception of God in one’s life, the ability to communicate that personal experience to others. Priesthood exists for the folks—so that Joe and Betty and the kids can live well. Men must be formed in such a way that their experience of God is communicable. There must be academic seriousness. Most importantly, the conditions must be in place where life with God can flourish.”

Farren holds powerfully for the truth of prayer, particularly in common: “What is happening here? We are rendering praise, thanks, adoration, petition—in a way that engages the soul of each one of us in a real way. Prayer should be dignified, in union with the Church, focused on the Scriptures, and must engage us at the level of soul. A community at prayer before God has at times left my heart ravished, it’s enrapturing. We don’t always do that, but it’s what we need to try to do. When we content ourselves with rote formulas and ritual, we deprive ourselves of the deep benefit—we need the deep truth of prayer always, every day—otherwise, how do we persevere in a vocation? How do we have the nerve to stand up every day before people and say ‘This is the word of God?’ The truth of prayer resonates within us, with the wounds we carry, our joys and sorrows.”

One can sense, in speaking with Fr. Farren, how deeply he lives this life of prayer and how closely intertwined it is with others: his brother Dominicans, the men he has formed, those to whom he has preached and ministered. It is amusing to try and imagine a man of such influence—who has assisted John Paul II in the preparation of speeches, worked for the Knights of Columbus, led the Leonine Commission, and held many other sensitive positions besides—with the Little Red Book in his pocket. Farren just laughs. He recalls the time when, while working for the Roman Curia, he was personally sent to Mother Teresa to order her, in the name of the Holy See, to improve the quality of initial formation of her sisters in several ways. “What do you say? ‘Now let’s get with the program, Mother.’ Me telling her what to do? Now that’s something. I remember asking myself, ‘Why me?’ What an awesome way God has of working even through my flaws and weaknesses: why should God act in these ways?”

Fr. Farren remains bullish about the future of the Order of Preachers. He sees the Dominican vocation as delivering a message received through prayer, probed in study, and consonant with reality. “Our task is to articulate the faith in a way that is coherent, understandable, and attractive to people—attractive based on God, not on our own cleverness. Then, we manifest the awesome love of God: My soul magnifies the Lord. That’s what our role as preachers is: people whose whole lives are spent to help people in their relationship with God. Hallowed be thy name: we’re helping others magnify the Lord in the same way, to praise the greatness of his mercy and love. That’s what we do by articulating the faith in this way as friars preachers.”

Br. Henry Stephan entered the Order of Preachers in 2011. He is a graduate of Princeton University, where he studied Politics. On DominicanFriars.org