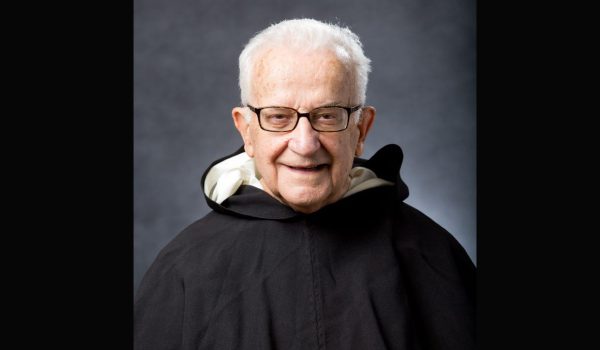 Editor’s note: This is the third post in a series that honors the religious lives and fidelity of several of our Jubilarians as part of our celebration of the 800th Jubilee of the Order of Preachers.

Father Angelo Henry Camacho, O.P., professed his first vows on August 16, 1954. A year earlier, he had received his religious name, Henry, after the eminent Dominican mystic, Blessed Henry Suso, who was known for his strange and extreme austerities and penances. Unlike Bl. Henry, Father Camacho never carved IHS into his chest. However, like Blessed Henry, Fr. Camacho expresses his love for Jesus in unconventional prayer. Sitting with him in chapel, you’re likely to hear an intense, deep-throated exhortation break the silence. Sometimes it’s our Lord’s name (“…Jesus…”), while other times it’s a simple affirmation during the Office of Readings (“…yes…” “…that’s right…”). Not everyone prays this way, but it’s certain: Fr. Camacho prays this way.

Fr. Camacho has spent most of his fifty-plus years in the Order of Preachers on mission in Peru, and he has amassed a collection of stories that rival Forrest Gump. While in South America, he participated in the nascent stage of Liberation Theology, though one of the deadliest recorded earthquakes would quickly shake him from that belief. He declared, “I couldn’t believe it anymore. No society caused that amount of evil.” He survived a car crash in Europe with Fr. William Bonniwell, OP, who was edified by his piety during the calamity. As the car careened down the side of the hill, Fr. Camacho screamed out, “JESUS, MARY, JOSEPH…JESUS, MARY, JOSEPH.” They were unharmed. His years on mission in Peru included the earthquake, death threats from the Shining Path, a silent standoff with a would-be assassin, and the martyrdom of his friends (whom he was able to see beatified last year).

One of my favorite stories concerns his first encounter with St. Teresa of Calcutta. Upon meeting her on a plane heading from Bogota to Chimbote, Peru, he thanked her for sending sisters to Chimbote and kissed her hands. She then took the hands of the priest and kissed them. Then he took her hands and kissed them. Then she again kissed the priest’s hands, and this comical scene repeated until it was interrupted by the return of another Missionary of Charity. Fr. Camacho didn’t have the final count, but he cheerfully claims it was upwards of 15 exchanges.

Yet for all these unique stories, Fr. Camacho loves above all to share the story of how he discovered Blessed Elizabeth of the Trinity. When someone remarks in surprise, “Oh! You know her?” he asserts, “Know her, I love her!” He remembers receiving her book from a friend in 1982. At that point, he had been professed for 28 years and had been ordained a priest for 22. He is indebted to Blessed Elizabeth, he explained in our interview, because “she gave me a taste of the Christian contemplative life and a model of perseverance.”

The friendship and love he discovered with the obscure Carmelite sister—who is soon to be canonized—resulted from his dedication to study, so central to the Dominican life. As he told me, “A Dominican has the obligation to study for the rest of his life.” Fr. Camacho once set himself the goal of studying the writing of Blessed Elizabeth of the Trinity for 1 hour a day for an entire year. His dedication to that goal gave him a friend in heaven and continues to shape his apostolate. Referring back to his days in the House of Studies, he explained the importance of the foundation he received in Thomistic philosophy and theology: “8 years equipped me to study the rest of my life. Study is a form of prayer…I have no doubt.”

Fr. Camacho currently works in Peru with Marriage Renewal (REMA). Much of the work centers on helping couples to see Christ within each other and within their marriage. As a Dominican priest, Fr. Camacho wishes to bring couples to the Word of God in the sacraments and in his preaching. All the while, he encourages couples to practice hope in God while they work through difficulties in their marriages.

Though his work with REMA continues, Fr. Camacho sees himself transitioning into a new stage of his Dominican life. When I asked him what it means to be a jubilarian as the Order celebrates its 800th Jubilee year, he expressed gratitude for God blessing him with a Dominican vocation. He looks optimistically at the men joining the Order of Preachers, and he is thankful for the brothers as his years of active ministry begin to wane. “At this point,” he remarked, “I can enjoy the brethren. I have no desire to be young again in body.”

His words reminded me of a beautiful scene from the weekend of our interview. Around lunchtime, Fr. Camacho entered the refectory to a scene of white, much to his surprise. 15 student brothers were passing through the area and had stopped at his priory for lunch. Immediately upon the priest’s entrance, the brothers attended to him, as they would any friar. They escorted him to his seat, set food before him, and filled his glass. Once his lunch was served, he began to share some stories and wisdom.

As we younger brothers served him in body, he served us in spirit. The afternoon displayed the intersection of the different generations that comprise the Order as well as their harmony. After we had laughed and enjoyed one another’s company, his parting advice to us was this: “Do God’s will.”

Br. Irenaeus Dunlevy was born ​the youngest of four children ​in Columbus, Ohio​.​ ​He grew up in the ​rural ​southeast suburb of Canal Winchester. ​A​fter leaving the area for college, his family joined the ​Dominican ​parish of St. Patrick’s in Columbus. ​He received a Bachelor and Masters of Architecture from Virginia Polytechnic Institute and State University ​and practiced for a religious architecture firm in the DC area.​ Br. Irenaeus entered the Order of Preachers in 2013.​​ On DominicanFriars.org