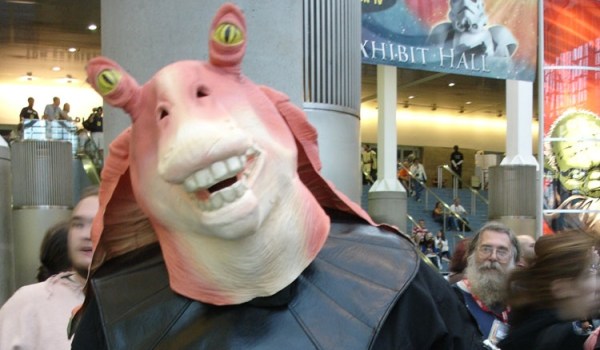 For those who don’t know him, you actually don’t need much of a description of his personal details, background, opinions, or accomplishments within the world of Star Wars, Episodes I–III, to understand him. Jar Jar Binks is intended to be a comic-relief character, but every joke he is a part of falls flat. He interrupts more important storylines, lacks self-knowledge, and falls short when it comes to common courtesy. The only reason he is in the movie is the choice of George Lucas, creator ex nihilo of the Star Wars universe, who to this day defends his existence against withering attacks from otherwise devoted Star Wars fans.

It’s nearly impossible for us to see the good in Jar Jar. Even his name gets annoying. It’s also hard to get into the mind of George Lucas, who has shown himself capable of such cinematic genius, yet in this instance has succumbed to such unenlightened character development.

Amidst all the Star Wars excitement (and rejoicing at a new movie without Mr. Binks), I realized that there is a bit of Jar Jar in me (and before I take all the flak, he’s in you too). I am certainly capable of causing others to be frustrated at my selfish actions, to roll their eyes at my “jokes,” and to become annoyed at my lapses in etiquette. This isn’t even necessarily to cross the threshold of sinning, though sin is certainly often a part of what makes us undesirable to be around. Rather, Jar Jar’s faults are more the sort of things that elicit “ugghh” and “Really?” as reactions.

It’s this behavior that can be even more frustrating because it’s not clear how to fix it, both for the victims and the perpetrator. In fact, this mischief is often such a part of one’s personality that it can begin to be identified with their “personhood” as well. Human frailties can be so manifest in the social undesirables that we could wish, like pious Star Wars fans, that this person would just go away—away from us. Yet Jar Jar remains. He stays because he is held in existence by his creator, who sees him in a way that others do not and cannot.

Now of course Lucas is fallible, and Jar Jar is a failure as a cinematic figure. But our Creator is infallible, and sustains us in existence at literally each moment of each day. He never wishes that we were not created, never answers the prayers of those who would rather we didn’t exist. He sustains even the damned, those who have permanently rejected his gift of their very existence for a warped self-love. Though they reject God’s love, they are incapable of completely rejecting it because he loves them in their existence.

When our frustrations with ourselves pile up, or when we just simply cannot stand another person, our thoughts can take us to dark places. Being patient with others is a natural virtue, but it can become an exercise in gritting one’s teeth in the presence of a “Jar Jar” and lead to gossip later on to relieve the tension.

The best way forward is to pray to God that we may see what he sees in them. To paraphrase Mass Preface VII for Ordinary Time, “Father, may you see and love in us what you see and love in your Son.” We need God’s grace to perform the spiritual work of mercy to “bear wrongs patiently,” even for the Jar Jars we know. And if we can’t see in others what God sees in them, we can through faith in the goodness of God begin to trust that there is deep existential good in them and, when we are disappointed in ourselves, good in us too. As the saying goes, “God doesn’t love us because we are good, but because he is.” Sometimes, all we can do is accept his goodness and extend it to others. Human personalities will never be perfect in this life, as challenging as that is to accept. But God is perfect here and now, and he loves us in our need, loves us in our imperfections.

In the story of the cosmos, each person likes to think he is a Luke Skywalker, Han Solo, or even a Darth Vader. Yet, often enough it turns out we are more like the Jar Jar Binks in the story of creation. And our Creator is just fine with that.