Menu
Confraternity of the Most Holy Rosary > Uncategorized > God or Nothing 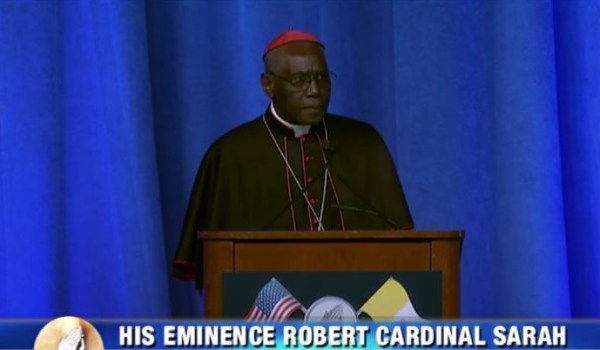 If you had a choice between God and nothing, which would it be? The answer is obvious. But given the option “God or something,” many of us will choose something besides God. This is really a senseless choice, though, because in comparison with God even the greatest thing is nothing. This is the ultimatum that Robert Cardinal Sarah presents to us in his book God or Nothing.

You may not have heard of Cardinal Sarah (pronounced Sa-RAH), but he is head of one of the major dicasteries in Rome. He’s an outspoken advocate for the family and a man of prayer and simplicity. I had the honor of hearing him speak recently at the 2016 National Catholic Prayer Breakfast, which was attended by about 1,000 Catholics from the DC area. Cardinal Sarah closed his keynote address with the phrase “God or nothing,” referencing his book and putting our cultural struggles in perspective. In the end, all that matters is that we choose God and give other people the opportunity to do the same.

By putting this point front and center, Cardinal Sarah reinforced what House Speaker Paul Ryan said in an address at the same event: the purpose of our society, culture, work, family life, and religious freedom is to allow us to choose God. Mr. Ryan, much to the pleasure of the Dominicans in attendance, opened with a quotation from St. Thomas Aquinas: “It should be known that all right-thinking men make contemplation of God the end of human life” (from the opening of the commentary on Lombard’s Sentences). What seems useless in the march of everyday family and work activities, viz. praying to God, is actually the reason that we do those other things. It’s not that work, family, and other activities are bad, but that we should choose them for the sake of God, so that in Heaven we can contemplate God together with all the saints. God is the one thing that can make us happy, because He is not a “thing” that is part of creation, but the infinite Creator who both exists outside creation and sustains it at every moment. If you want to read more about the types of happiness people strive for, St. Thomas gives an overview in the Summa Theologiae (I-II q. 2). His conclusion is that only God can satisfy the human heart (see article eight of the Summa link).

By pointing to God as the purpose of all things, Cardinal Sarah and Mr. Ryan gave a fresh perspective on religious freedom. Threats to the exercise of religion and its influence in the public square not only attack Catholics as Catholics, but limit our ability to share the Gospel and provide the conditions of happiness for everyone. Our belief that God is the end of all human activity and the one thing that can make us happy means that outside of the Catholic faith, perfect happiness is simply not possible. If we cannot spread the good news that Jesus Christ has opened the way to God for us, then we cannot share the only real possibility for happiness.

Cardinal Sarah reminded us that we are engaged in spiritual warfare with the forces of darkness. He called gender ideology “demonic,” a term that seems too strong for many. How do we understand this? Sarah had written in his book:

Why this frenzied desire to impose gender theory? An anthropological vision that was unknown a few years ago, the product of the strange thought of a few sociologists and writers like Michel Foucault, should suddenly become the world’s new El Dorado? It is impossible to remain complacent in the presence of such an immoral and demonic deception. . . . The chief enemies of homosexual persons are the LGBT lobbies. It is a serious error to reduce an individual to his behavior, especially sexual behavior.

Such an ideology wants to remove faith from people’s lives and propose alternative paths to happiness. Similarly, in his breakfast talk, Cardinal Sarah said that this gender ideology is demonic because the demons are envious that humans have the chance to reach Heaven, and want to keep us away from God. By helping promote cultural ideologies that make faith irrelevant or characterize it as discriminatory, the demons are trying to shut us out of Heaven. This means that when we stand up for the truth, we should start in prayer and rely on God’s help against these foes. By trusting in Jesus’ victory over all His adversaries, we can have the courage to face our human opponents and pray for their conversion. After all, we want them to be able to obtain happiness in God alongside us!

In prayer, we can see the struggles and frustrations of American political and cultural life from God’s perspective. With the gifts of faith and understanding, we will be able to see that nothing compares to the greatness of God. Any time we are tempted to choose a way of life without reference to God, or to let our neighbor do so with only a shrug of our shoulders, we can remember Cardinal Sarah’s wisdom: it is not a choice between God and something, but between God and nothing.