Menu
Confraternity of the Most Holy Rosary > Uncategorized > Find x 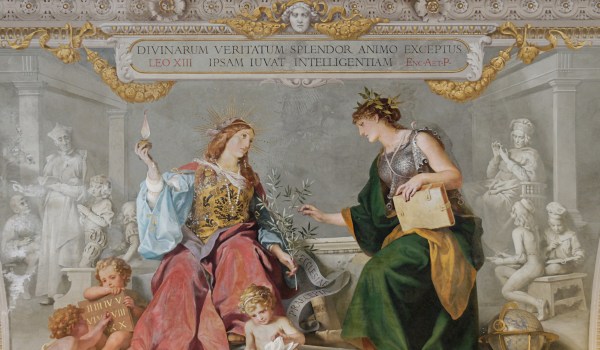 In algebra, students learn to perform mathematical operations using variables.  Initially, these variables represent known quantities, but eventually they come to represent unknowns.  The usefulness of this skill becomes apparent once one leaves the classroom: oftentimes, one must do more than simple arithmetic operations to determine a quantity one wants to know, as when splitting a check among parties who consumed disparate amounts.  Algebra is one method of reasoning from the known to the unknown, a method proper to mathematics.  Yet the scope of human knowledge extends far beyond the domain of arithmetic: in fact, it encompasses all of reality, and in every field—from philosophy to anthropology to astronomy—man can reach new intellectual heights.  Along with the ability to know comes the thirst to know, and this desire for knowledge—more than the desire for food or pleasure or money or power—orders human life.  And so Aristotle defines man as an intellectual animal and St. John Paul II the human person as a ‘knower.’  Man is made to know, and all of reality is his object.

This search for knowledge is motivated by that most humane of questions: why?  With an intuitive confidence in the knowability and reasonableness of the world, men do not want to know only what there is, but what caused it and how it all fits together.  Hence such perennial questions as: Who am I?  Why am I here?  What is the purpose of life?  Is there a God?  Does life continue after death?  This search is not merely theoretical but also practical: for such knowledge not only satisfies man’s innate longing to know, but also allows him to determine how he should act.  Man desires not just knowledge but wisdom, an all-embracing understanding of reality as a whole in light of its higher purpose.

Yet the sheer breadth of reality is immense.  Not only do myriads of things exist, but myriads of kinds of things: plants, animals, numbers, economies, planets, ideas—the list could fill many pages.  Man can reason about every class of objects, but a different science is needed for each.  Thus, one can study botany, zoology, mathematics, economics, geology, and epistemology.  However, while every science involves drawing hitherto unknown conclusions from known premises, not every science follows the same method.  Although the algebraic method is appropriate when reasoning about numbers, it is insufficient for the study of physical things, for which one must rely upon a scientific method.  Similarly,  concepts studied by philosophy are too abstract to be subjected to experimentation and rest instead upon sound rules of logic.

The task of ordering such disparate kinds of knowledge may seem insurmountable, especially if one recalls Hamlet’s friendly admonition.

There are more things in heaven and earth, Horatio,

Not only does man possess unanswered questions, but there could be—and, judging from his past experience, probably are—a thousand others he has not thought to ask.  Is man’s intuition that the world is knowable wrong?  Or is his desire for a comprehensive view of reality ever to exceed his grasp?

The philosopher may answer with a resounding no, for amidst the diversity of reality is a fundamental unifying principle: everything that is exists.  Based on this commonality, he can reason about being in general without knowing every instance of it.  For example, one can know that all things must either exist in their own right or receive their existence from another.  Yet for something’s existence to be necessary in its own right and for it to be able to bring other things into being out of nothing, it must be sheer, unlimited being, and, due to its infinitude, there can exist nothing like it for there is nothing beyond it.  This is the creator of the world, the uncaused cause.

To the philosophers, it is unknowable in itself due to its transcendence and unlimitedness; finite minds can but grope in its vicinity as they consider it as the cause of reality.  To Christians, however, he is God, the God who at once transcends his creation and is intimately present, who loves it, reveals himself to it, and entered into it.  God encompasses all of reality and is its higher purpose, for all things were made by him and are meant to worship him as manifestations of his glory.

Although some aspects of God so transcend human experience as to be unobtainable by reason, he reveals himself to his creatures, allowing them some knowledge of himself as he is.  In the light of heaven, the blessed behold God directly, without any intermediaries.  Although he is still beyond human comprehension, nevertheless they know him—as one really knows the ocean when at the beach despite not being able to comprehend it in its entirety—and see themselves and all of creation wondrously arranged within him.

Man’s intuition that the world is reasonable and knowable is not misguided, nor does he desire in vain for wisdom and for an all-encompassing understanding of reality.  Since all creation proceeds from God according to his wisdom, it is unified and intelligibly ordered.  Man’s inborn desire to know and to be wise is attainable because he can use his reason to draw heretofore unknown conclusions from things known from experience.  Aided by God’s grace, through prayer and the study of revelation he can even know God as he is in himself, the ultimate wisdom and ultimate unknown.  In fact, he was made to.