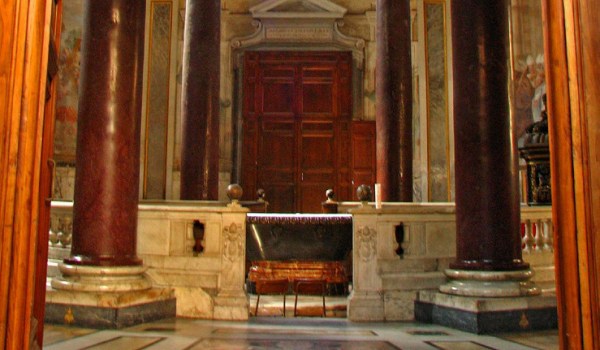 How’s that possible?  I’ve heard this new dimension called “resurrection-life.”  Jesus founded the Church and instituted the sacraments for the purpose of pouring that same resurrection-life into us.  At baptism he gives us our initial influx of it.  By baptizing people at the Easter Vigil, the Church is reminding us that, because of our own baptism, we participate in the same divine life that raised Jesus from the dead and that spiritually restores us after the death of sin.

For the entire week after Easter Sunday, the Church celebrates what is called an octave.  The Resurrection is so important that one day isn’t enough to celebrate it.  So for eight whole days, it is still actually Easter Day.  The Church’s liturgy wants us to celebrate Jesus’ Resurrection in such a festive manner because it has created the possibility for our own resurrection.  Baptism was our admission ticket for this resurrection; now we’re in the eight-day-long party.

The Easter Octave has its origins in celebrating the new resurrection-life of those who were baptized at the Easter Vigil. These neophytes, from the Greek for “newly planted,” remained in a kind of joyful retreat for all the seven days following the baptism.  During that time they were attending daily Mass and the Divine Office, making pilgrimages to the font of their baptism, and receiving catechesis on the connection of their baptism with the Resurrection of Christ.  Throughout this whole week, they continued to wear their white baptismal robes all day and every day to celebrate their having been “washed white in the blood of the lamb.”  The early Latin Christians, therefore, referred to Easter Week as hebdomada alba (“white week”) from these white garments.

But the octave wasn’t just about the neophytes.  Dom Gueranger points out that, early on, Easter Monday was fixed as the anniversary of baptism for the previous year’s neophytes.  The Church, through her liturgy, was continuing to remind them—and us!—of the importance of remembering their baptism.

Over the centuries adult baptism became less common.  But the Church still maintained the rich baptismal imagery of the Easter Octave, which included processions to the baptismal font and to the depiction of an empty tomb set up in the church building. Additionally, there were readings, antiphons, and prayers about baptism and the Resurrection.  Dom Gueranger suggests that we can learn an important lesson from this liturgical organization.  Celebrating the anniversary of our baptism as a feast day, he says, should be a Christian instinct.  Our baptism was the day when we were born into supernatural life—thus it should even take precedence over the celebration of our natural birthday!

But these festivities can’t go on forever.  On the Saturday of Easter Week, the neophytes participated in a ceremony at which they took off the white garments they had been wearing all week.  After laying aside these outward symbols of purity, the neophytes made a solemn promise to maintain inward purity of soul—that is, to keep the resurrection-life alive and flowing within them (particularly by frequenting the sacraments and performing charitable works).  By this public ceremony, “the Church returned the newly baptized to the duties of their ordinary station of life: they must now return to the world and comport themselves as Christians—disciples of Christ—for this is what they are.”

St. Augustine, sensitive to the danger that faced the newly baptized, cautioned his neophytes:

These Festival Days are now at an end, and the days that follow are given over to daily meetings, demands, disputes.  Be careful, brethren, how you pass your life amid these things.  From the quiet life of these past days you should take in gentleness of spirit.

In other words, take in the meekness that characterizes God’s mercy.  The joy that the Christian has had this past week must now flow over into a life of serving his neighbor.  Right before His passion Jesus gave us the “new commandment” to “love one another as I have loved you.”  That’s the whole point of having His resurrection-life planted in our souls—that we become like Him.