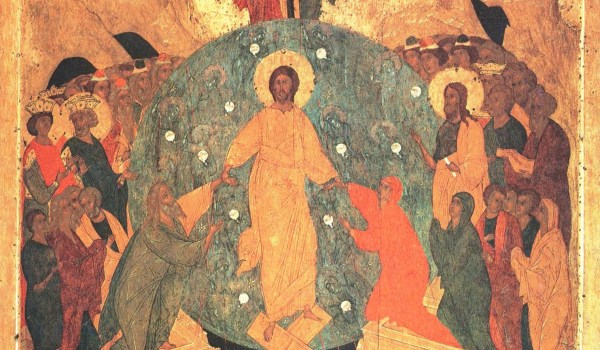 At the end of a particularly good day, my college friends would refer to it as a “slice of the Glory Cake.” The exact origins of the phrase have been lost to the mists of history, but during our reunions, passersby today may still hear the words “glory” and “cake” bandied about in conversation.

Of all days in the history of the world, the Resurrection was a heavy helping of the Glory Cake. Christ returns from the dead in a glorified body, and his friends “glory in the Lord” (1 Cor 1:31), proclaiming what happened. He could have delivered his intro, “Peace be with you,” then disappeared, and it would still be a Glory Cake day. But no, after they feast their eyes on his appearance, he feeds their minds with his word, holding an off-the-cuff Lectio Divina session: “Then he opened their minds so they could understand the Scriptures” (Luke 24:45).

I imagine all the disciples trying to fall asleep that first night after Jesus departed, full from the encounter with his glory. What must have run through their heads? Probably some wild string of thoughts roughly translated as, “That guy…” Or in the King James version, “Wow… just wow.”

That’s what happens when God fattens us on the Glory Cake.

Apparently the Church thinks so as well. For the entire week of Easter, we sing the same Alleluia verse taken from Psalm 118: “This is the day the Lord has made; let us be glad and rejoice in it.” This is from the ancient Easter chant, the Haec Dies. (See an ultra-exuberant version here) The Church loves this day so much, she celebrates the Resurrection once a week, as the Roman Missal says: “On the first day of each week… the Church, by an apostolic tradition that draws its origin from the very day of the Resurrection of Christ, celebrates the Paschal Mystery. Hence, Sunday must be considered the primordial feast day.”

“This is the day the Lord has made.” In the beginning God created the heavens and the earth, but his re-creation of the world achieves a new pinnacle here, when the kingdom of God definitively dawns upon the world in the risen face of Christ. Once and for all, he shakes off sin and death and dances on his grave. Death loses. Life wins. Game over.

But let’s settle down for a moment.

Personally, I’ve had a handful of Glory Cake days, crashing into bed with my head spinning from some overtly emotional religious experience. But glory has a way of fading – sic transit gloria – and most days don’t end up in such a holy ruckus.

In time, the term Glory Cake started to take on a second definition. Talk began of various “recipes” for daily Glory Cake, one version of which runs:

Metaphorical recipes aside, the point carries over into real life. The most glorious things must pass into daily life. The whole hoopla of wedding days, or ordination days, eventually mellows into normal daily life, where love and knowledge grow slowly, side by side. Chesterton says of this great day that “the miracle is that something so supernatural should have become so natural . . . The Resurrection did not shake the world; it steadied the world.” (See his conclusion from Everlasting Man)

All the steady, daily elements of our Christian life would be lifeless if Christ stayed lifeless in the tomb. Everything we do as Christians is possible only because Christ has risen: our vocations, our mutual love, and especially our life of prayer. May we never forget the absolute novelty that Christian prayer is. While so many other religions search the stars and pray to God above, we have God at our side, buried no longer in the tomb but in our hearts, where He dwells and where He speaks to us in the stillness between each moment. (See the Javier Bardem monologue from To the Wonder)

Sometimes I think about being a disciple in the pages of the Gospel. I could have been there to hear the Sermon on the Mount, or to see him feed the 5,000. But when I went home at the end of the day, at most, I could have hoped to join the crowd again. Today, we have something far greater. Christ surrounds us on every side, calling our name and answering when we call his.

This is our daily response to the Resurrection, says Luigi Giussani, this turning to Christ. And we can end with his words:

‘O God, make haste to help me.’ Here the rolling away of the stone of the tomb of our empty actions begins. The Resurrection begins from this aspect of our infinite impotence, which is begging, from this supreme recognition that God alone is powerful, and from the supreme gratitude that He who initiated our existence wants to carry it to fulfillment. There is nothing more expressive, universal, Catholic, ecumenical, than a heart made new by the “yes” to Christ, by that hope in Him for which each of us daily takes up the search again, the desire, the asking, the sacrifice of purity. Always living a peace in the continually revived mortification.

Image: Dionysius and his workshop, Descent into Hell