Menu
Confraternity of the Most Holy Rosary > Uncategorized > Embarrassed Dignity 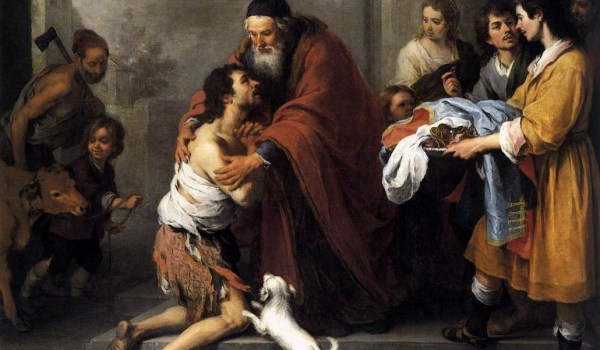 The parable of the Prodigal Son is among the most famous teachings of Our Lord Jesus Christ. This parable has been proposed as the icon of God’s mercy in the preaching of our three recent Popes, who have stressed how the father’s mercy restores his son to the dignity he lost by sin.

In the fourth chapter of Dives in Misericordia, St. John Paul II meditates on the parable. The pope points out that the first thing the prodigal son loses in demanding and squandering his share of the inheritance and in leaving his home, is the very dignity of life in his father’s house. When he hits rock bottom and begins to feel nostalgia and to turn back home, he is not yet converted. Physical necessity drives him first to long for the bread that his father’s servants eat, then to return as a servant. St. John Paul continues,

At first sight he seems to be acting by reason of the hunger and poverty that he had fallen into; this motive, however, is permeated by an awareness of a deeper loss: to be a hired servant in his own father’s house is certainly a great humiliation and source of shame. Nevertheless, the prodigal son is ready to undergo that humiliation and shame. He realizes that he no longer has any right except to be an employee in his father’s house. His decision is taken in full consciousness of what he has deserved and of what he can still have a right to in accordance with the norms of justice. Precisely this reasoning demonstrates that, at the center of the prodigal son’s consciousness, the sense of lost dignity is emerging, the sense of that dignity that springs from the relationship of the son with the father. And it is with this decision that he sets out.

St. John Paul writes that the son’s recognition of his lost dignity is met by the father’s mercy – an open-arm embrace that extravagantly surpasses the demands of justice and welcomes his son home with a merry feast. Mercy meets the sinner mindful of his emptiness and shame, but raises him up to regain what he once rejected.

In a homily addressed to Roman youth in the Prison for Minors, Pope Benedict XVI spoke of the dignity of true freedom. He told these youth that the prodigal son (a truly rebellious teenager) experienced boredom in his father’s house and longed to be free of its rhythms and responsibilities. He wanted to pursue, as we often do, freedom understood as “doing whatever I want.” In the first few months after the son’s departure, the pope suggests that this young man found some sort of happiness rooted in possessions, pleasure, and power. But once these passed, as they always do, he found himself dejected and faced by a deadlier routine. He came to realize that what he thought was the path to life and freedom was instead the road to a life materially and morally “lower than that of swine.” Pope Benedict then says:

So it was that he set out on a new journey, an inner journey. The boy pondered and considered all these new aspects of the problem and began to see that he had been far freer at home. . . . During this interior journey, during this development of a new life project and at the same time living the exterior journey, the younger son was motivated to return, to start his life anew because he now understood that he had taken the wrong track. I must start out afresh with a different concept, he said to himself; I must begin again. And he arrived at the home of the father who had left him his freedom to give him the chance to understand inwardly what life is and what life is not. The father embraced him with all his love, he offered him a feast and life could start again beginning from this celebration.

So does Mercy treat us. Lovingly and respectfully, He permits us to turn away from Him, to experience our misery and our need to return home. But always He is the Father looking down the road for us, ready to welcome us back to the dignity and freedom of His sons.

Pope Francis too has preached this parable, even recently as he gave a retreat to priests on the eve of the Sacred Heart of Jesus. Beginning his first conference with his characteristically Ignatian and simple touch, the Holy Father imagined the encounter between the father and the returning son. He said, “[The prodigal son] finds himself still dirty, yet dressed for a banquet. For his father does not say: ‘Go and have a shower and then come here.’ No. He is dirty and dressed for a banquet. . . . It is a state of embarrassed dignity.” Such is Our Father’s mercy, which does not wait for us to get our act together and become presentable. When we turn back to Him (itself a merciful grace), He meets us on the road, open-armed and ready to bestow on us dirty, sorry, embarrassed sinners – whether we’re Christians, young criminals, priests, popes, or any human – the dignity of being His sons.