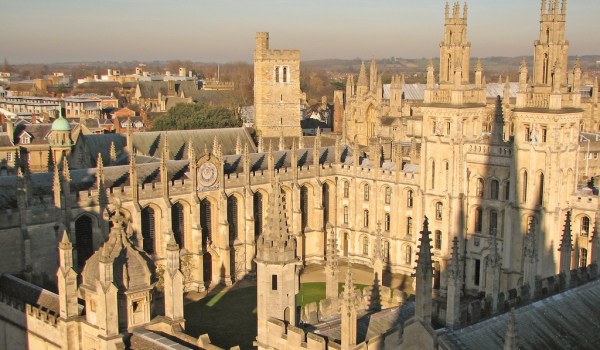 A university is much like heaven—or the medievals meant it to be, at least.

Take, for instance, Oxford University: the quintessence of higher learning for English speakers since the eleventh century.  In his poem “Thyrsis,” Matthew Arnold famously termed Oxford “that sweet city of dreaming spires,” and declared that “she needs not June for beauty’s heightening.” Beginning in the eleventh century, the University grew as a confederation of local colleges chiefly aimed at the theological education of clerics.  They lined street after street with soaring medieval Gothic spires of gray stone that almost look as if they were the very buttresses of heaven herself.

At the very center of those dreaming spires sits the University Church of St. Mary the Virgin: Mary, the Seat of Wisdom and Throne of the Lamb.  The medievals understood well that the worship of Almighty God is the precondition for and source of contemplation. Dominus Illuminatio Mea—“The Lord is my light”—runs the university’s motto.  The Lord, therefore, provides the light of all contemplation of beauty within those Gothic-spired quads; and thus could Arnold declare that Oxford “needed not June” or the long-overdue sun to illumine her beauty.  Medieval Oxford, at least, needed not June for beauty’s heightening because the souls germinating in its womb understood the passage from Revelation that the Lord God shall be their light (Rev. 22:5)—no matter how persistent the rain!

Oxford is also heaven-like insofar as the city of the heavenly Jerusalem, St. John tells us, “has no need of sun or moon to shine upon it, for the glory of God is its light, and its lamp is the Lamb….and the night shall be no more” (Rev. 21: 22-24).  The Light of Divine Illumination, Christ, the Lamb of God Himself, sustains all being in heaven just as He sustains all holy contemplation within the womb-like walls of a medieval university.  And just as the Lamb is the center and illumination of heaven, so is the center of Oxford a church dedicated to Mary, His true seat and tabernacle, the lens through which His light shines.

These days, Oxford has drifted from its medieval origins in its intention and regard for the fullness of the truth.  Yet its cold stone walls have become iconic for their association with learning itself. And so, at the turn of the twentieth century, when America’s leading universities were competing for a status like Oxford’s on this side of the pond, they naturally began re-imagining their campuses as architectural imitations of the medieval Gothic.

Yale University, for instance—arguably the American Oxford architecturally speaking—seems, these days, to have become an Enlightenment take on Oxford, in miniature.  Yale, like Oxford, understands the importance of beauty for learning (the place is a neo-Gothic theme park!); hence the neo-Gothic building campaign of the early 1900s.  Its mottoes, Lux et Veritas and the Hebrew words Urim and Thummim (the dice with which the Israelite high priest would take auguries to determine God’s favor), however, belie the school’s original intention of training Congregationalist seminarians.

But I identify the contemporary Yale with Enlightenment principles precisely because its adoption of the neo-Gothic would become an attempt to showcase the supremacy of man’s reason and man’s knowledge—and therefore the effective lack of need for God or an understanding that His truth is the ruling principle of the universe.

At the center (more or less) of beautiful Yale is a looming Gothic carillon tower which is not the crown of a church.  Instead it functions as a sort of pictographic temple to the triumph of reason, boasting various notable university alumni along with the greatest Greek thinkers and the allegorical personifications of the Enlightenment virtues.

At the center of Yale, then, is not a temple to the Seat of Wisdom to remind us that Christ is the only light of Heaven and of the world. Instead it boasts a temple to man who has come of age, finally finding his enlightenment by the power of his own reason.  Interestingly, a major centerpiece of the Sterling Memorial Library at Yale is the Alma Mater mural, which looks a lot like the Christian depiction of the Blessed Virgin Mary—and seems to be an attempt to supplant her as the Seat of Wisdom. “Would that I might make thee love books more than thy mother,” reads its inscription.

Yale’s beautiful but empty reproductions of the medieval Gothic style are indicative of what the world (including Oxford and other universities) has lost since the Middle Ages: an unshaken understanding that Jesus Christ, the Incarnate Word of God, is the creative force which holds us in being, and that He alone is the Light of our minds and souls.  To say, as He did of Himself, that He is the Way and the Truth and the Life (Jn. 14:6) is to acknowledge that He is at once the source, the content, and the goal of our illumination.

But the landscape at Yale is not entirely spiritually barren. For instance, just north and slightly east of the center of Yale’s Old Campus lies Hillhouse Avenue.  There stands a proud neo-Gothic edifice displaying a sign: “St. Mary’s Catholic Church.”  Inside can be found again the One Who lights up the whole world; and it is only with Him in the picture that Yale’s neo-Gothic atmosphere achieves its full purpose: to remind us that Christ alone is our light.  Wherever there is Christ, then, there is—like Oxford of old—an earthly city of dreaming spires that prefigures heaven, where He alone is the lamp.