Menu
Confraternity of the Most Holy Rosary > Uncategorized > Carino Converted 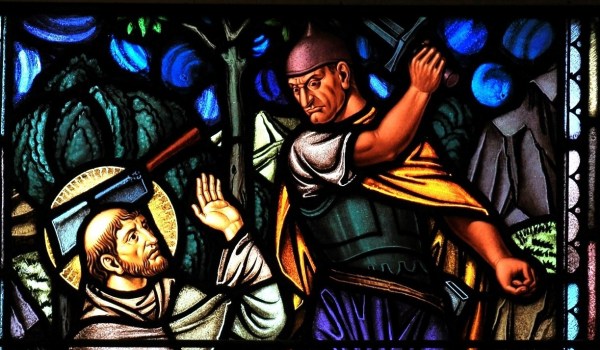 Editor’s note: This is the fourth post in a series on the vocation to the cooperator brotherhood on the occasion of the Order’s 800th anniversary.

On April 6, 1252, St. Peter of Verona was assassinated by two men hired by the Cathar heretics in retribution for his preaching of the Catholic faith.  He famously began to write the Creed in his own blood while he was dying, and was canonized just eleven months later, becoming the first canonized martyr of the Order of Preachers.  He was not a lay brother, and today is not his feast.  Today is instead the feast of Carino of Balsamo—locally venerated as a blessed—he being the man who cut off the top of St. Peter’s head with a pruning axe, mortally wounded Peter’s companion Domenico, and then returned to stab Peter with a dagger before he could finish writing his faith in the dust.

While Carino’s accomplice seemingly fled to heretic strongholds in the Alps, beyond the reach of the law, Carino made it only as far as Forli, where he collapsed in exhaustion and was taken to the hospital of St. Sebastian.  His crime was unknown there, but overcome with fear of death and hell, Carino made his confession when a priest came to visit the sick—Bl. James Salomini, prior of the Dominicans in Forli.  Upon his recovery, Carino decided to make religious life part of his penance, and having won the trust of Bl. James, was clothed at Forli in the habit of the lay brothers of the Order of Preachers.  Upon his death in 1293, Carino, aware of the gravity of his crimes, asked to be buried in unconsecrated ground rather than in the conventual cemetery.  The friars acceded to his wishes, but the people of Forli, now acquainted with his sanctity, demanded not merely that he be moved to the conventual cemetery but that he be raised to the honors of the altar.

How did an assassin end up under Our Lady’s mantle in heaven with his confessor and his victim?  In the thirteenth century, as now, murder was an impediment to priestly ordination, and the Order of Preachers has always had a clerical character due to the close connection between preaching and the sacraments of penance and the Eucharist.  Nonetheless,  the plea of all candidates to enter the Order is not for admission as a candidate for holy orders but rather for “God’s mercy and yours.”  As our Franciscan brothers have specially signified the corporal works of mercy by the poverty of their own communities, Dominicans have specially signified the spiritual works of mercy by acts of mercy to their own brethren.  Even as heinous a crime as murder in the service of those who hated the true faith of Christ was (given contrition) no obstacle to living religious vows, and that life of penance was Carino’s way of thanking God for the mercy of absolution.  This focus on God’s grace and mercy is distinctively Dominican, but it has its roots in the Benedictine traditions of labor and hospitality.  As the monastic tradition developed in the medieval period, a distinction arose between monks who had been raised from their youth as oblates of the monastery, immersed in both study and religious observance, and those who came to the monastery as adults, generally without those advantages.  These latter were known as conversi because their lives had been visibly transformed (or converted). But while they shared the religious life of those who had been raised as oblates, their lack of education and sometimes their manifestly immoral histories acted as impediments to ordination.  Rather than performing the sacraments, they passed on the mercy which they had received by engaging in the manual labor required to provide hospitality, whether to guests at Benedictine monasteries or Dominican clerics deeply engaged in study.

Carino was transformed by grace from a man who persecuted Christ into one who recognized his Lord in the truth his fellow friars preached and in the needs of the poor. He lived this vocation of the convert with heroic sanctity.  He cared for both the clerics in the convent vowed to poverty and the destitute outside its walls.  Found wounded by sin and physical exhaustion in the hospital of St. Sebastian, Carino was blessed to perform penances that bore both spiritual and material fruit in the Church’s field hospital of mercy.  His pruning axe had pierced the skull of St. Peter of Verona, but Peter pierced Carino with an arrow of grace:  the “Credo” he traced on the ground in his blood is not only the beginning of the Nicene Creed, but also an acrostic of the Latin phrase “Carinus Religiosus Erit Dominicani Ordinis” (Carino will be a religious of the Dominican Order).

Br. Thomas Martin Miller, OP, was born in York, Pennsylvania. He holds a BA from Thomas Edison State University and worked for the Trip Advisor Media Group before entering the Order in 2013.