Menu
Confraternity of the Most Holy Rosary > Uncategorized > Book Review: Cunningham’s Responses of the Roman Missal 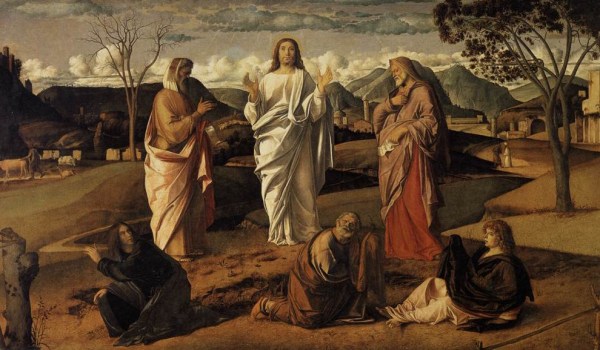 And after six days Jesus took with him Peter and James and John his brother, and led them up a high mountain apart. And he was transfigured before them, and his face shone like the sun, and his garments became white as light. And behold, there appeared to them Moses and Elijah, talking with him. And Peter said to Jesus, “Lord, it is well that we are here; if you wish, I will make three booths here, one for you and one for Moses and one for Elijah.” He was still speaking, when lo, a bright cloud overshadowed them, and a voice from the cloud said, “This is my beloved Son, with whom I am well pleased; listen to him.” When the disciples heard this, they fell on their faces, and were filled with awe. But Jesus came and touched them, saying, “Rise, and have no fear.” And when they lifted up their eyes, they saw no one but Jesus only. And as they were coming down the mountain, Jesus commanded them, “Tell no one the vision, until the Son of man is raised from the dead.” (Matthew 17:1-9)

Things would not always be this way. Rather than being trampled by crowds, performing healings, or preaching the Word, Christ takes His closest disciples up the mountain, in pursuit of the one thing necessary. This gift, which the Lord wishes to shower upon them, is done so at His own initiative. It is He “who is transfigured before them.” Given who we are, and what we are, a response is necessary. St. Augustine writes that while we were created without our consent, we cannot be remade (redeemed) without our consent. The only fitting response to divine generosity must be with the highest powers at our disposal, our intellect and will.

And this St. Peter provides. “Tis Good Lord, to Be Here!” he exclaims, never one at a loss for words. And yet, as St. Luke relates in this case, “he did not know what he was saying” (Luke 9:33). This innocent failure of nerves manifests the mild tactlessness of Simon the early disciple rather than the blundering Peter’s threefold denial of his Master. On the other hand, this outburst of wonder before the Lord transfigured before him also manifests St. Peter’s great ardor and devotion. The flame of charity flares up inside him, causing him to speak, but his own ignorance and immaturity in the faith lead him to miss out on the significance of what he is saying.

This experience is not far from any of us, as we mouth back responses at Mass often with little appreciation or attention. We can even lack St. Peter’s ardor while matching his ignorance!

All the more reason why Fr. John Cunningham’s account of our responses at Mass, the recently published book It Is Right and Just, proves so helpful. Taking advantage of the improved English translation that came into force five years ago, Cunningham seeks to inform our minds and hearts so that we might worship the Lord in spirit and truth.

To do this, he catalogues the language borrowed by the liturgy from both the Old and New Testaments. Furthermore, Cunningham provides a brisk introduction explaining those clauses of the Nicene Creed that might roll off the tongue of a modern Mass-goer without being understood in the slightest. If you’ve ever wondered what the word consubstantial meant, or (still better) if it has never crossed your mind at all, this text will provide you with an explanation that is pithy and accessible.

At 64 pages, this short read can be well worth your time as an introduction to improving your participation at Mass. It could also be helpful on a parish-wide basis, helping to inform the entire community about what the prayers really say. We are not always soaring on the mountaintops, in the heights of contemplation—but it is good, Lord, for us to be aware of what we’re saying when we get there.