Menu
Confraternity of the Most Holy Rosary > Uncategorized > A Transfigured Christmas 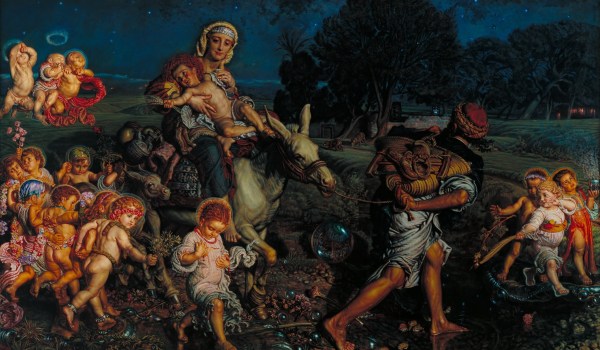 “Calvary casts its shadow over Bethlehem,” wrote Fulton Sheen.  The original televangelist meant not to steal away Christmas cheer, but recognized that the Cross mysteriously “shaped” the life of Jesus.   From his infancy to the heights of Tabor to the infamous “place of the Skull,” death followed him.  However, the darkness of suffering and evil could not overcome the one who revealed himself as the “Light of the World” (Jn 8:12).  In the final confrontation, it is death that is buried in the luminous wounds of the Risen Christ. This truth makes sense of the bitterness encountered in the story of Bethlehem, and it promises to change our experience of the Christmas mystery as well.

Christmas is a feast of light—something sung on our own city sidewalks even as it was first celebrated by celestial lights over silent, shepherded fields.  A star leads wise men to seek out the beautiful Babe (Mt 2:2), the Beloved Disciple describes the coming of God Incarnate as the “light of men” (Jn 1:4), and when the infant Jesus is taken to the Temple for the prescribed rituals, he is identified by an aged prophet as “a light for revelation to the nations” (Lk 2:32).

But even Christmas hymns cannot ignore the myrrh; death follows closely upon Jesus’ birth, and suffering follows Christ and those closest to him throughout his life.  The envious thug-king Herod issues an order, and the footpaths of Bethlehem stream with the blood of those whom we commemorate as the “Holy Innocents”—the first blood to testify to the truth of Christ (see Mt 2:16).  John’s Light streams as a beam into the darkness (see Jn 1), and the old prophet’s companion tells the Child’s mother “a sword shall pierce your heart” (Lk 2:35), foretelling the cross “borne for me, for you.”

Pinched on a mountain between Jesus’ humble beginnings and his dolorous “end” is an exceptional event: immediately after speaking of his predestined death on the Cross, Jesus is seen “transfigured . . . his face like the sun, and his garments . . . white as light” (Mt 17:2). The disciples see clearly Who is before them, and they fall on their faces.  The event sheds rays on Jesus’ entire life, from crib to Cross, and gives his followers the hope to persevere amidst the dull and even the gloomy.  Even the folds of Christ’s bleached tunic conceal shadow: “two men talked with him . . . who appeared in glory and spoke of his departure” (Lk 9:30-31). Soon after, Jesus further spells out the details of his impending death (Mt 17:22-23).

The events leading to Easter are enveloped in darkness. From the betrayal in the Garden to the trial by night to the vitriol of the mobs demanding blood—it is all disorienting.  And as Jesus hangs between heaven and earth and the sun is obscured, who can fail to feel his groan, “My God, my God, why have you forsaken me” (see Ps 22)? But neither the psalm nor the Gospel ends here; the Cross and all it touched were part of “an appointed path to glory,” as Sheen observes. In fulfillment of the plan, here death definitively “is swallowed up in victory” (1 Cor 15:54), and the light of Christ is meant to transfigure our lives too.

Image: William Holman Hunt, The Triumph of the Innocents