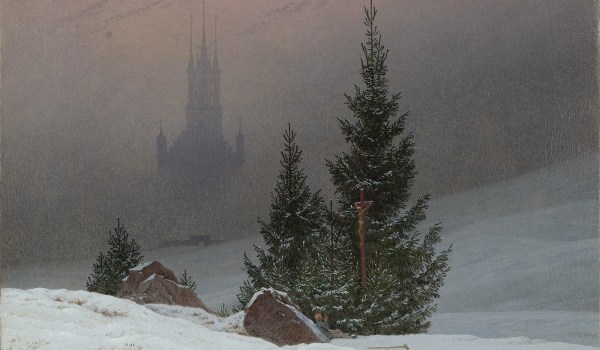 – Christina Rossetti, “In the Bleak Midwinter”

That the Nativity comes to us in the bleak midwinter has always fascinated me. Now, one might object that a wintry Christmas is merely the product of a Western imperialist bias. But the bleak midwinter has little to do with the natural climate, and everything to do with the human condition. For no matter where you reside—Buffalo or Buenos Aires, Saskatchewan or Sydney—the effects of original sin in our world can be felt with much greater force than any blizzard.

Especially on Christmas day, the gap between where we find ourselves and the Incarnation we are celebrating can seem impossibly vast. We might reflect on all the violence, sickness, and deprivation endured by so many, by those whose voices cry out to heaven like a frosty wind. As Christians, we might also reflect on those who have hardened their hearts against the Lord and His commandments, and that the streams of living water that ought to be welling up within ourselves have been solidified, like ice, by our sins. In truth, to live is to reside in a valley of tears which no amount or tinsel or holly can level. Yet our hope is in this: we do not tread an untraversed landscape.

Long ago there was another bleak midwinter. In 1299, after a promising century, Europe had begun to fall into a period of agricultural failure, war, disease, and famine. Spiritually, all was not well either. Five years earlier, Pope Celestine V had resigned the See of Peter. In ten years’ time, a French pope, Clement V, would be residing in Avignon rather than Rome. At the threshold of the fourteenth century, the Christian was, like us, looking around with uncertainty at his surroundings.

Then something remarkable began to happen. During Advent, thousands of Christians from all over Europe began walking. They trekked toward the Eternal City, like the Prodigal Son who begins his repentant journey to the father’s house. These men and women penitently made this pilgrimage in order “to pray at the tombs of the Apostles Peter and Paul, and to receive the pope’s blessing, in order to obtain the grace and strength to carry on.”

And so on Christmas of that year, our merciful God once again surprised His people, as He had centuries before in Bethlehem. On this great feast day, Pope Boniface VII looked out from his window at the gathering crowd and, in the manner of the One who once “saw the crowds and had compassion on them because they were weary and helpless, like sheep without a shepherd” (Mt 9:36), this Vicar of the Good Shepherd issued a papal bull in February of the following year, reinstituting the Jubilee that had been a part of Jewish life (cf. Lev 25:8-13).

The bull dictated that for the entire year and every hundredth year following, “the most full pardon for all their sins” would be bestowed through the mercy of God to anyone who would be truly contrite, confess their sins, and visit the churches of St. Peter and St. Paul. The great indulgence drew a great number to Rome in 1300, and peace and plenitude reigned even where the great crowds should have brought chaos. One chronicler, Giovanni Vilanni, testifies: “The greatest marvel I have ever witnessed was that throughout the whole year there were continually in Rome 200,000 pilgrims, exclusive of the inhabitants of the city, and without counting those who were on their way, and all were sufficiently provided with food, both men and horses” (Vilanni, Nuova Cronica).

Perhaps Christmas comes faithfully each year in the midst of our bleak midwinters so that we might call to mind and rejoice in magnalia Dei, the wonders that God has wrought. Filled with such wonder, St. Ephrem, a fourth-century Syrian monk, composed over two dozen poetic hymns on the Nativity, including these lines that capture the surprising nature of the Incarnation:

What Child is this? This is Jesus Christ, the High Priest made Infant in swaddling clothes, sympathetic with our weakness and frailty because it is His too by virtue of His birth into our bleak, frosty winter. Truly God was born in time, born of the lowly Virgin Mary, and so the Letter to the Hebrews can implore us to “draw near with confidence to the throne of grace, so that we may receive mercy and find grace to help in time of need” (4:16).

May our drawing near to the throne of the manger this Christmas enable us to stay with the Lord throughout the New Year. May we take advantage in 2016 of the graces and indulgences connected to a plethora of celebrations in the Church: the 800th Jubilee of the Order of Preachers, the 500th Anniversary of the birth of St. Teresa of Avila, and, most especially, the Extraordinary Jubilee of Mercy. And may you have a blessed Christmas! Hodie Christus natus est!