Menu
Confraternity of the Most Holy Rosary > Uncategorized > Truth, Beauty, and Citrus Fruit 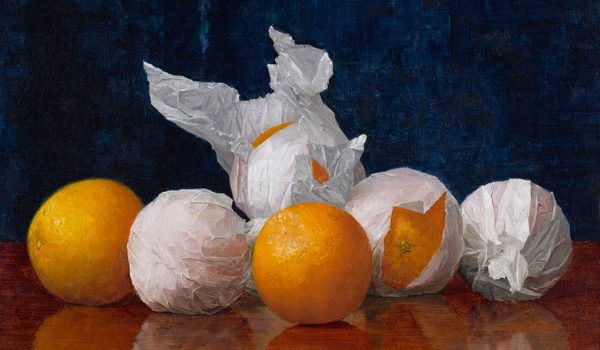 The Dominican Order has a long history of producing preacher-poets.

Art is a form of knowing—distinct and legitimate—rooted in feeling and delight—that discovers, in the words of Jacques Maritain, ‘the splendor of the secrets of being radiating into intelligence.’ That insight makes possible the great potential of Christian literature to depict the material world, the world of the senses, while also revealing behind it another invisible and eternal dimension.

Flashes of this kind of intelligible splendor can be found in Bl. Henry Suso’s “The Finding” and St. Thomas Aquinas’s “Adoro Te Devote” (a supreme poetic expression of “worship and longing”).

They are also on display in Oranges from Dominic’s Tree, an anthology featuring original poetry by Dominican friars, sisters, and laity from the nineteenth century to the present day.

The collection was compiled by Fr. Matthew Powell, O.P., who explains in the introduction that the title refers to an event in the life of St. Dominic: tradition has it that he planted an orange tree at the Priory of Santa Sabina, Rome. A number of orange trees have grown in that priory garden through the centuries, each taken from a shoot of the previous tree. Similarly, Fr. Powell explains, the poetic fruits of Dominican life are always rooted in the life of study and contemplation.

Reading through Oranges from Dominic’s Tree, I was struck by how frequently death figures as a central theme. This theme in turn inspires some of the most ingenious and insightful verse in the anthology. Consider the three following examples.

Before she became Mother Mary Alphonsa, foundress and superior of a Dominican community that treats the untreatable, Rose Hawthorne (daughter of Nathaniel Hawthorne) was a wife and mother. Following the death of her five-year-old son Francis, she wrote a poem that begins with  poignant simplicity and spiritual wisdom:

I loved a child as we should love

In her natural, maternal love, she recognizes a connection—a springboard—to the kind of supernatural charity we are all called to practice. The poem continues as a meditation upon the ways in which genuine self-giving leads to self-fulfillment through Christ. In a sense, the poem is prophetic: in its images and themes one sees the spirit that would animate Rose’s future work of selfless care for terminal cancer patients.

The title of a short work by Fr. Thomas Heath, O.P., is a petition: “Pray for Me When I Am Dead.” The lines of the poem form a reply to this request. (“I do,” the poem begins.) As in Rose Hawthorne’s work, the speaker feels connected to the deceased, but here this tie is actually cause for concern:

My life is not a prayer.

Your life was not a prayer.

The candor and repetition in this stanza pack a punch. Such is the dilemma of every sinner who knows his own unworthiness. So too do we know our loved ones’ faults and failings—a knowledge that comes with any real relationship. “I loved your total shabbiness,” the speaker admits. What prevents him from despair is the knowledge that Christ too had “shabby friends.” The shabby are those in need of salvation. Christ therefore came to call the shabby. His earthly life was one long prayer, for those whose lives are not.

My favorite work in Oranges from Dominic’s Tree is by Fr. Dominic Rover, O.P., “Ars Moriendi: The Art of Dying.” It is an extraordinary examination of what Maritain described above as “the secrets of being radiating into intelligence.” Fr. Rover wrote this poem during the early stages of the Parkinson’s Disease that would take his life. And as death begins to come into view for him—as an unshakable, inevitable, but slow-moving reality—he refuses to look away. There are a number of moving passages in this long poem. I will end with only one of them, and give this preacher-poet, this witness to the touch of Life, the final word:

I admit that I am jealous

I am jealous because I have never had

But I have been near life so many times,

I have felt the touch of life

and have trembled at the touch

So even in the face of death

I am willing and eager

to testify on behalf of life.