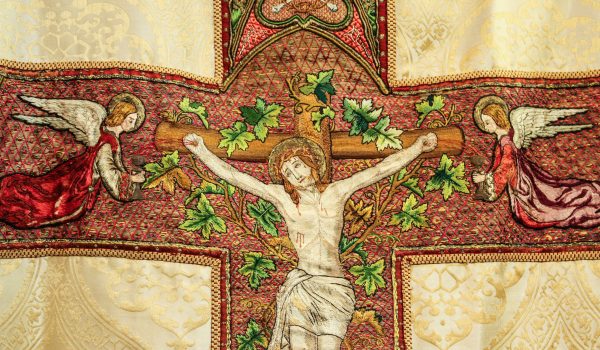 I once heard a preacher tell his congregation that Catholics have a peculiar fascination with the gruesomeness of the crucifixion and that this sick fixation on “gore” was behind the death and darkness now celebrated on Halloween. “They love their crucifixes bloody, the bloodier the better!”, he exclaimed, referring especially to the realistic crucifixes found in some Italian and Spanish Catholic churches, religious processions, and homes. This preacher maintained that his form of Christianity had a superior emphasis on light, joy, and the risen Christ. Therefore the cross in his church is empty, implying Christ’s victory over death, and Jesus is always shown smiling and welcoming children, rising from the dead, or ascending to the Father.

Secular critics of the cross have similarly complained against the graphic depiction of Christ’s suffering in Mel Gibson’s The Passion of the Christ and have even accused St. Teresa of Calcutta of having a perverse addiction to suffering, which they attribute to the Catholic faith’s preoccupation with the cross.

Indeed, in the eyes of the world, Catholics have truly embraced folly in embracing the cross (1 Cor 1:18, 23). And yet, to those whose hearts are open, the cross bestows the greatest of comforts.

A friend of mine, who has certainly suffered much in life, once told me, “I don’t understand all of your Catholic theology and traditions, but the first time I saw a crucifix in a Catholic church—that’s when I realized how much God loves me. I enjoy the praise music, bright colors, and fun activities in my [evangelical Protestant] church, but when I am hurting it is Jesus’s suffering for me on the cross that shows me how much God loves me. I can relate to that.”

Everything in the universe, even our own existence, reveals God’s love to us. The gift of our lives, the love of our families, and the joy of friendship all show us God’s love. The beauty of nature, art, and music also reflects the beauty and love of our Creator. As Benedict XVI explained, all of creation reflects the eternal Word of God who created it and forms part of “a symphony of the word, … a single word expressed in multiple ways: ‘a polyphonic hymn’… [Yet] in this symphony one finds, at a certain point, what would be called in musical terms a ‘solo,’ a theme entrusted to a single instrument or voice which is so important that the meaning of the entire work depends on it. This ‘solo’ is Jesus” (Verbum Domini, 7-13).

Within the “solo performance” of the life of Christ, it is his Passion on the cross—which we remember whenever we gaze upon a crucifix—that most fully reveals to us God’s love. We have seen so many signs on street corners and at public events reminding us of “John 3:16” that we can easily become numb to its reference. In a direct and visceral way, by contrast, the crucifix re-presents the reality of God’s love for us in Jesus Christ.

The crucifix is an aid to contemplating God’s love recommended by countless saints and has been used by many preachers, evangelists, and missionaries to present the truth of the Gospel—including St. Paul of the Cross, founder of the Passionists, whose memorial we celebrate today. When imitating his patron in preaching Christ Crucified, he would always carry a crucifix with him to show people “the miracle of miracles of the love of God”—the Passion of Jesus Christ.

During times of great physical, emotional, or psychological suffering, it can be difficult to think straight, to reason with ourselves, to understand the truth that others may be trying to tell us, or to remember God’s goodness and his many blessings. When we or others we know find it challenging to accept God’s love in the midst of trials, let us gaze upon the cross, which communicates to us the visceral reality of God’s love.

Br. John Paul Kern grew up in Annapolis, MD where his father taught at the United States Naval Academy. He earned a Bachelor of Science in Mechanical Engineering and a Master of Science in Nuclear Engineering from Penn State University, where he entered the Catholic Church through the campus ministry’s RCIA program in 2006. Before entering the Order of Preachers, Br. John Paul worked as a reactor inspector for the US Nuclear Regulatory Commission and attended Mother of Divine Providence in King of Prussia, PA. On DominicanFriars.org