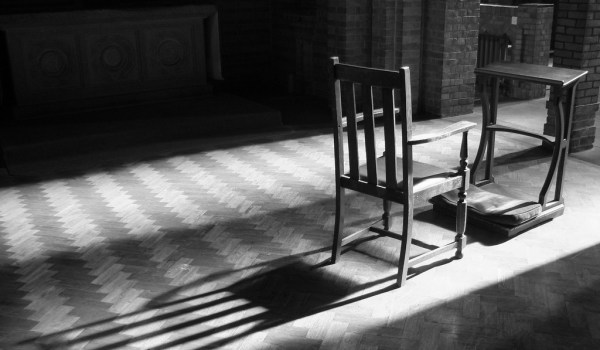 There are, in the life of the believer, occasions when the Lord seems to slumber. It isn’t that He feels completely absent—as He did to St. John of the Cross, Bl. Teresa of Calcutta, and others who have experienced the dark night of the soul—but one senses He is not present and active either. You find yourself in some distress, acutely aware of your neediness, and the Lord is suddenly unresponsive.“Your favor had set me on a mountain fastness,” delights the Psalmist, but “then you hid your face and I was put to confusion” (Ps 30:7). During his final General Audience, Pope Benedict similarly admitted there were times during his papacy when the Lord “seemed to be sleeping.” It may not be the soul’s dark night, but it makes for a spiritual midnight.

And he came to the disciples and found them asleep. He said to Peter, ‘So you could not keep watch with me for one hour?’ (Mt 26:40)

In his autobiography, Venerable Fulton J. Sheen recounts how he resolved at the time of his ordination to make a Holy Hour every single day as a priest, so as to strive to become ever more present to Christ. One afternoon years later, in the midst of a busy European trip, Sheen found an opportunity to slip into the Church of Saint-Roch in Paris, to make good on his resolution for that day. No sooner had he settled into his prayer, however, than his eyes closed and his head drooped.

He was out cold.

Sheen awoke exactly sixty minutes later. He asked the Lord, “Have I made a Holy Hour?” He thought he heard an angel reply, “Well, that’s the way the Apostles made their first Holy Hour in the Garden, but don’t do it again.”

Sheen leaves off there, offering no additional commentary about this episode. Nor do the Gospels contain any response from Peter, James, and John when Jesus finds them asleep. What could they have said for themselves? Though physically present at Gethsemane, they weren’t exactly present to Gethsemane. Only hours earlier they were promising they would sooner die together with Him than deny Him (Mt 26:35). Now, when Jesus had asked for much less—their companionship for a lone hour—they could not deny their weary eyes, weighed down by grief.

The last time these three apostles were alone with Jesus and heavy with sleep, they awoke only to lay eyes upon Christ in transfigured glory (Lk 9:32). Maybe in Gethsemane they closed their eyes tight to summon memories of that blinding radiance, to comfort themselves, and the next thing they knew the first Holy Hour was over. Maybe they were dozing off repeatedly, like spotty Wi-Fi that keeps cutting out. But when they are finally roused from sleep, the apostles find that the darkness of the Agony hangs so thick it is felt rather than seen. Like the haunting verse of Gerard Manley Hopkins:

I wake and feel the fell of dark, not day.

This line, which begins one of Hopkins’s “terrible sonnets” (a group of poems born from a period of his own spiritual struggle), applies not only to the apostles, but also to the Lord’s experience of “absent presence” in Gethsemane.

There is another sense of “wake” at work here, a secondary meaning that signifies a state of wakefulness when one would ordinarily be at rest. It thus harkens to the lonely vigil Jesus keeps. Although He is sprawled out on the ground like the apostles, His is the posture of attentive supplication rather than of slumber (Mt 26:39).

…and feel the fell of dark…

Jesus wakes (that is, stays awake) in order to suffer the full weight of the worst kind of darkness, that of sin and death. A “fell” can refer to a hide or pelt, like the kind cut from the animal sacrificed as a sin offering in the Old Testament (Lev 1:6). The apostles were not present to Jesus during the Agony. Their sins were, though. All of human sin—theirs, yours, mine—was being condensed and displaced onto Jesus, thereby making for the most terrifying kind of presence. To take away the sin of the world, He takes sin upon Himself (2 Cor 5:21; 1 Pt 2:24), fully aware and obedient to the truth that this, His sacrifice, marks the ultimate sign of God’s love for man.

On Holy Thursday night, and at every Holy Hour, we are invited to recall the crucial difference between unawareness and unresponsiveness, lest we conflate the two. It’s the difference between an absent presence (think: snoozing apostles, caught totally unawares) and a silent presence (think: Christ contained in the Eucharist, non-responsive but yet fully present). When we feel like He has drifted off, what that silence of His does is give us the opportunity to become exhausted ourselves. At some point, we will tire of clinging to hopes for quick fixes, painless remedies, and whatever else is not, ultimately, the Father’s will for us. We will grow absent-minded in the best way possible. We will fall silent, but not asleep. Then will we encounter the Lord, participating in the very Presence that is His silence. And there will be no doubt about it: we have made a Holy Hour.