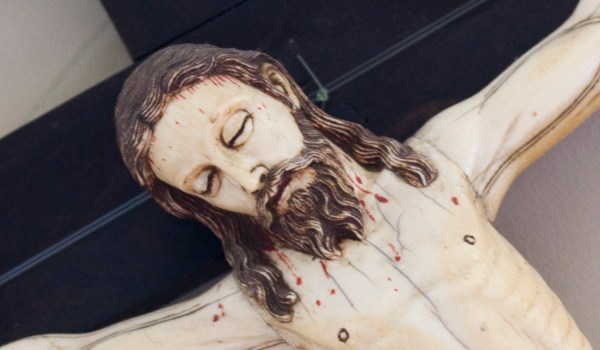 It’s called the Place of the Skull, we’re told. Κρανίου Τόπος. Everything converges on this place, as a figure hangs from a cross sunk into the Skull, a hill so named on account of its pock-marked appearance or after its popularity as a site for public executions.

The skull. The fixed grin, the frozen stare, the empty sockets. No rosy cheeks or ruby lips, and no windows to the soul here.

Silent, but not exactly subtle; the skull has a brutal, brass-knuckled eloquence: memento mori. Remember your death. Recall: you must die. “Your highest hopes, loves, the beauty that moves your heart—all this will decay and dissolve,” the skull grins. A handful of dust can, as Eliot observed, strike fear in the death-destined heart, but it’s the skull’s mocking stare that calls to mind the monotony of death. Death is an imprisonment in the now, a moment made eternal and inescapable. Death’s gift is a hollow present: we stare without seeing, we smile without laughing, and we linger without living.

And so we find Jesus, hung from a cross athwart the Skull. As he dies, as the Light of the world dwindles into death, from our point of view we see Jesus going out from us—out into darkness. And this is part of the optical illusion of the Place of the Skull. We delude ourselves that death is something “out there.” Our fear warps our vision, reverses our perspective, as if we weren’t the ones who build tombs out of dust to hold the dust of our death, and then, to hide from ourselves this disturbing truth, paint over it all. David Foster Wallace’s comment seems apt:

Jesus goes not out, but in to the darkness. He makes the great sortie into the realm of death, that is, into the stronghold of sin deep in the human heart. Death is out there, yes, but it’s out there, infecting all creation, because it’s first in here.

The awful knowledge of death within drives us out from ourselves, perverse exiles in denial of death’s claim on us. No longer faces radiant from life with God, we’re skulls grinning fixedly, staring blankly at the approach of the Godhead who hangs—enfleshed, hidden—to save us.

This Godhead took a face, and submitted this face to be kissed by a traitor, spat upon, pierced with thorns, struck, slapped, bruised by guards, priests, strangers. Each hand stretched out to strike, mock, and bully the Christ is in a way handing over the weight of guilt of every man, woman, and child, of every place and time, piling it all upon the head of the Lamb of God who stands quietly, knowing that the time has come to carry the guilt of the world into the wilderness. Look at the description of the scapegoat in Leviticus 16:

And humanity stands by, encircles the cross, wagging their heads. The mystery of the death of Christ meets with misunderstanding and mockery. Recall how Jesus describes the hypocrisy of the Pharisees: they are whitewashed tombs, concealing dead men’s bones and filth. They’ve covered over the inner rot, and present a cosmeticized, public face seeking praise, approval, applause. Yet here, at death’s great triumph, their faces are contorted, ugly with a laughter almost bestial in its braying scorn. Death presses against their whitewashed walls, emerges, walks abroad at noonday. This is the hour of darkness (Lk 22:53), where evil takes the reins and initiates a mockery of creation, a de-creation. At sin’s command, Let there be death!, the world is plunged into darkness.

St. Luke tells us that Jesus had “set his face” toward his destiny at the Place of the Skull, death’s playground (9:51). Jesus enters the darkness freely, faces the skull squarely. He doesn’t deny death its claim; he denies its victory.

During his life, the Son of Man has nowhere to lay his head (Mt 8:20). The Son’s only rest is upon the bosom of the Father. Because the Son’s strength, his food, is to do his Father’s will, it’s only when he breathes his last, when it is finished, and the Father’s mercy poured out for the world—then he bows his head. The dark unrest of sin is undone by the Son’s unflagging love and obedience; Christ the Head does not become the skull.

God will hear the cry of his suffering servant. He will not let him see corruption. On Golgotha, the Head takes the place of the skull.