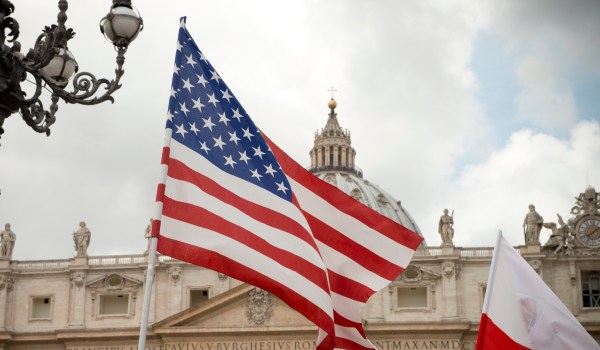 The Church is not a government, and in these not-so-serene days of state debate, we can be thankful for that.

A democracy, for instance, is like a babysitter. Her classic question is, “What did your mom say you could do?” A babysitter receives delegated authority from the consensus between parents, and it lasts only a limited time. The children are not her own, and she even knows she’s not their only babysitter. Her goal, then, is to keep the peace. If the children throw tantrums and want to have it their way, she either punishes them or permits them. Who is she, after all, to tell them what to do?

The Church is a mother. Her classic question is: “What did I tell you?” Her authority is from her identity, one who gave life to a child, and it lasts as long as that other life does. Her children are her own, and there is no other mother for them. Her goal exceeds maintaining the peace, for her far greater task is to educate and sanctify. When her children resist, she may punish or permit, but in a far greater and gentler manner she reminds them of her instructions for them, for their good, and growth, and godliness. She tells them these things because they truly need it. Though she responds to their unique personalities and all the surprises they present, she sees more than they do and must protect them from harm.

Call me naive, but I think children and adults both need guidance from someone higher, instead of being left to make their own rules. I mean no attack against democracy but am simply glad that there exists in our world something entirely different—the Church.

A “government of the people, by the people, for the people,” to add to Lincoln’s words, is as limited as those people. And rather than transcend our problems with wisdom from above, we tend to offer conflicting solutions. The current, bitter strife in Washington goes back to the days of Washington himself, who didn’t live to see Aaron Burr, the Vice President of the United States, shoot dead his former Treasury Secretary in a duel over divergent visions for the country, as this year’s hottest Broadway show, Hamilton, reminds us.

The Church, rather, is from God and towards God. Unlike the horizontal focus of governments, keeping peace among people, Mother Church’s is vertical. She helps to keep peace between people and God. Even her many laws, which society demands be updated and relaxed, are in place for this very reason, as the final sentence of the Code of Canon Law reminds us: “the salvation of souls, which must always be the supreme law in the Church, is to be kept before one’s eyes” (Can. 1752). We need something more than dialogue, more than rights and equality. We need a God who knows us better than we know ourselves, whose ways are not ours (thankfully!), yet who calls us to learn from Him.

But we humans prefer our ways, the road more traveled. For we know it better, and we want to see it through before we consider some “transcendent” option.

“We all, whether we know it or not, are fighting to make the kind of world we should like—but that we have learned to recognize that others will fight and die to make a different world, with equal sincerity or belief. Deep-seated preferences cannot be argued about… and therefore, when differences are sufficiently far reaching, we try to kill the other man rather than let him have his way.”

Those are the words of Supreme Court Justice Oliver Wendell Holmes—son of the American poet of the same name—published in the 1918 Harvard Law Review. How much killing of reputations and of credibility is done today, rather than discussion? And all is done sincerely. Such are the ways of men who are impassioned by limited thoughts.

What, then, of democracy? Is it all inevitably a Lord of the Flies affair, beginning on a paradisal shore, setting up some basic rules, then jealously descending into a frenzied madness? Not necessarily. It is still a young project since its 18th-century revival in the western world, with real sadness and real successes, both.

I have no brilliant alternative to democracy. Nor do I abandon my basic civic duties, least of all keeping up-to-date with what transpires. The woes of this kingdom do not make me abandon this kingdom, though I put my innermost hope in a far different one, as Jesus taught us to pray, “Thy kingdom come.”

Br. Timothy Danaher entered the Order of Preachers in 2011. He is a graduate of Franciscan University of Steubenville, where he studied Theology and American Literature. Before Dominican life he worked as a life guard in San Diego, CA, and as a youth minister in Denver, CO. On DominicanFriars.org