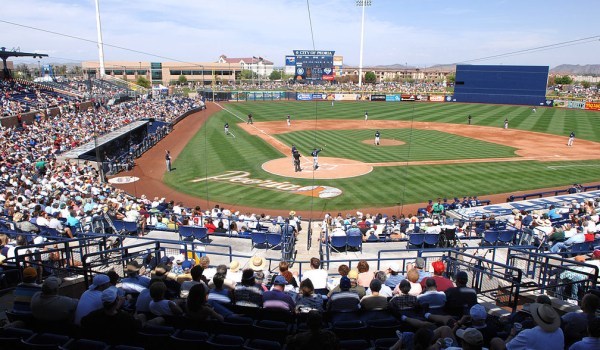 In the warm southern states of Florida and Arizona, where it seems as if winter never really arrives, the captivating sound of the crack of the bat can already be heard.  Baseball players from all across the major leagues have been reporting to their teams’ respective camps: first the pitchers and catchers, then the other position players, and today, the first exhibition games between different squads take place.  With more than a month remaining before the regular season, Spring Training is underway.

As the players return to action on the diamond for the first time since last fall, these weeks of practice provide them with some much-needed preparation, without which they would be sluggish and ill-equipped for the upcoming season.  One does not simply arrive at the ballpark in mid-season form; rather, it requires a regimen of workouts, drills, and game situations to be ready to approach the long season ahead.  In short, it takes practice.

Fittingly, then, baseball’s Spring Training coincides with the season of Lent.  As the players hone their skills and get back into shape, so the Church invites us all to prepare to celebrate the Paschal Mystery at Holy Week and Easter through spiritual training, as we temper our drives and passions for earthly things and turn towards God and his plan for our salvation.  As St. Paul writes, “Every athlete exercises discipline in every way.  They do it to win a perishable crown, but we an imperishable one” (1 Cor 9:25).  As impressive as the World Series trophy is, it still pales in comparison to the endless joys of Heaven, which far outlast the thrill of a championship season.  How much more, then, should we take up a regimen of training, both for the spiritual combat against temptation and sin and to get ourselves into mid-season form to celebrate fully and worthily the feasts of Easter.

Our spiritual discipline as Christian believers can take on several forms: fasting, in which we subject our desires for food, comfort, and other worldly goods to those of things above; almsgiving, whereby we give of ourselves in order to identify with the poor Christ and those around us who have less; and prayer, which unites us to God in mind and heart as we intercede for ourselves and others.  These penitential practices are called “ascetical,” from the Greek word askesis meaning “practice,” because they build up habits of holiness and prepare us for the contemplation of God, to which all Christians are called.  As St. John Cassian relates in his Conferences, “bodily affliction produces some initial progress but not the perfection of love itself, which holds the promise of the present life and of the one that is to come.  And therefore we consider the exercise of the aforesaid works to be necessary, because without them the heights of love could not be scaled” (I.X.3).

Just as a baseball player at training camp builds up the skills of pitching, hitting, fielding, running, and throwing with the goal of winning the World Series in mind, we who follow Jesus into the desert of Lent can develop the various virtues through works of asceticism, whether we are in the monasteries like Cassian or working a desk job in the world, with the goal of union with God in mind.  And just as no ballplayer undertakes the rigors of Spring Training alone, but has his teammates with him, we find many ascetical practices of Lent that can be done as a community: attending a parish Fish Fry, contributing to the Rice Bowl or a food or clothing drive, and participating in the Stations of the Cross or a communal penance service.  As we undergo this season of Spring Training for the soul, let us continue to prepare to celebrate the Paschal feasts, both at this coming Easter and in the life to come.