Menu
Confraternity of the Most Holy Rosary > Uncategorized > Splintered History 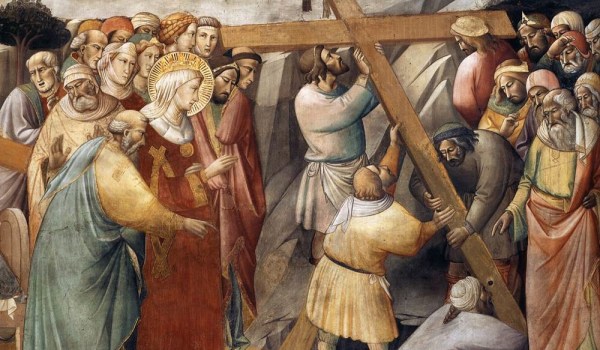 When the people of Israel complained against God during their wandering in the desert, God sent saraph serpents among them.  It was not until Moses, at the Lord’s command, raised a serpent on a pole that all who looked upon it were cured (Num 21:6-9).  The Church Fathers saw in this a prefigurement of Christ’s mounting on the cross, a promise that future generations would be saved by considering His passion and contemplating its instrument, the cross.  From this belief arose both the practice of concentrating on a crucifix when praying and today’s feast, the Exaltation of the Cross, which honors the cross’ instrumental role in the salvation of the world.  Yet, if Christ’s crucifixion occurred during the Feast of Passover in the springtime, why does the Church celebrate His cross on September 14, roughly five months later?  To discover the answer, one must look to the earliest centuries of Christianity.

The hostility of Jewish leaders and the persecution of Roman authorities made it difficult for Christians to frequent places associated with the life of Christ.  Moreover, the province of Judea was thrust into turmoil by three revolts against Roman authority in the century following Christ’s ascension (Jerusalem was razed in 70 AD and rebuilt as a Roman city in 135 AD).  Nevertheless, the Christians of the Holy Land strove to preserve orally their knowledge of the locations associated with Christ’s life.  Their efforts would bear fruit two centuries later.

Born of humble parentage in the middle of the third century in Asia Minor, St. Helena married an ambitious Roman soldier named Constantius and bore him a son, Constantine, in 272 AD.  Though Constantius, who eventually became emperor, cast aside his wife for a more advantageous match, his son nevertheless remained faithful to her.  When Constantine himself became the first Christian emperor of Rome, he honored his mother with the title of ‘Augusta’ and converted her to Christianity.  The saint took to her new religion zealously, impressing her contemporaries with her abundant virtue.

When Constantine conquered the eastern half of the Roman Empire in 323 AD, at long last, Christians in the Holy Land could worship openly.  In thanksgiving for his successes, the emperor ordered a number of churches be built with public funds at Christian sites throughout the Levant.

Despite being well into her seventies, St. Helena burned with a desire to walk the ground her Savior’s feet had trodden.  Shortly after the Council of Nicaea, she set out on a pilgrimage to pray for her son and grandchildren, visiting numerous churches and bishops along the way and generously aiding the needy.  However, she found that some holy places had been forgotten, while others were occupied by pagan temples to discourage worship.  In Jerusalem, the site of the Lord’s burial had been itself buried under a mound of earth and surmounted by a temple to Venus; St. Helena ordered the temple razed, the earth removed, and a monumental church erected on the site.

The cross, too, had been hidden by the Jews, cast into a ditch or well and covered over.  Moved by the Holy Spirit, St. Helena had sought it during her pilgrimage.  Upon reaching Jerusalem, she prayed that the cross might not remain hidden and, lo and behold, three crosses were found among the rubble heaped over Holy Sepulchre.  Identifying the True Cross by its inscription, St. Helena rejoiced and sent the nails to her son, one for his crown and another for his bridle, a reminder, according to St. Ambrose, that rulers must be mindful of Christ and, by His grace, curb their appetites.  St. Helena and St. Macarius, bishop of Jerusalem, confirmed the identity of the cross by laying it alongside the body of a dying man, who miraculously recovered.

St. Helena died shortly after returning to Rome at the age of eighty.  The church she ordered constructed over the Holy Sepulchre was completed in 335 AD and dedicated on September 14, when the cross was brought outside for the veneration of the faithful.  St. Helena’s discovery of the cross and the dedication of the Church of the Holy Sepulchre have been celebrated jointly from the fourth century onward.

Medieval and Renaissance depictions of religious events are often, at first glance, puzzling: Christ is shown teaching not on the shore of Galilee but along the coast of Geneva, with its mountains and gothic spires; the martyrs tormented not by Roman centurions but Italian condottierri.  Surely the artists knew better!  In fact, most of them did.  Yet they wished to impress upon their viewers that sacred history is not mythology: the gospels and the lives of the saints describe real events that happened to real people, as real as the windmills of Holland or the towns of the Rhineland.  Similarly, today’s feast and the life of St. Helena remind us of the fullness of Christ’s Incarnation: the Lord is not merely a tale told to children, nor simply a concept bandied about by theologians.  Rather, in partaking of our humanity, he shared in our particularity.  He lived not once upon a time, but at that time; not somewhere, but there; and he suffered, not in the abstract, but concretely, upon a cross, the fragments of which the faithful can venerate to this day.  St. Helena, pray for us that we may never forget the historicity of Christ.

Image: Agnolo Gaddi, The Finding of the True Cross

Br. Albert Dempsey was born and raised in Rochester, NY. He entered the Order of Preachers after graduating from Williams College in 2013.