Menu
Confraternity of the Most Holy Rosary > choir > Should We Preach to the Choir? 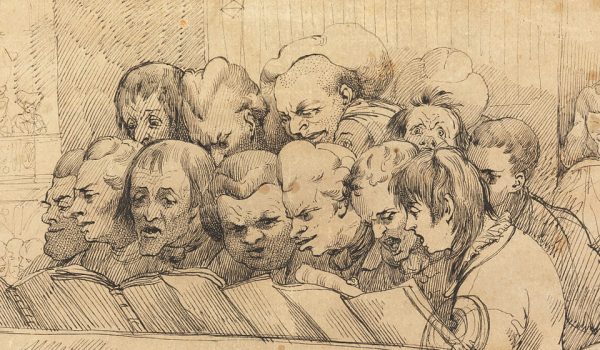 We don’t know how to agree with people we agree with.

We are reminded daily that our country is riven by disagreements and that we have little hope of crossing the many cultural, political, moral, and religious divides. It’s perhaps no coincidence that our culture of division has lost its grip on what unity and agreement might look like—even among those on “our side” of the ideological chasm. The standard operating procedure seems to be repetition ad nauseam of the same arguments and convictions—in short, preaching to the choir.

But maybe this is too hard on the notion of “preaching to the choir.” Consider just how common the phenomenon described by the phrase is. We all have friends we can rely on to join us in railing against TV replay in major league baseball, for instance, or against traffic cameras, or gas prices. It’s no different with the weightier matters of politics, family, faith. It’s always a danger, though, that our discussions of our interests and our passions with like-minded folks become mere re-hashings.

Now think of the phrase in light of its use. The focus is the agreement assumed between preacher and choir. The choir already gets it. The preaching is strictly pro forma, a blasé performance that would be mind-crushingly boring except that it serves to confirm the set of beliefs that unites the group. So: the preaching isn’t actually preaching, because its goal isn’t to convert, but only to confirm its listeners.

The problem isn’t that we’re preaching to the choir; it’s that we seem to have forgotten the goal of doing so.

So consider three dangers we face in preaching to the choir:

The (metaphorical) choir is often made up of self-selecting individuals, whose attendance and identity coincide: they are in the choir because they showed up, and they show up because they are in the choir. Any group that’s self-selecting almost invariably becomes other-excluding, since admitting others can compromise the tight ranks, the “chemistry” of the existing group.

When a group circles its wagons and defines itself by its occupation of a small patch of intellectual and spiritual ground, over and against all comers, the result is lockstep agreement with a built-in echo chamber effect. Arguments become strangely scripted, predictable, and opinions echo, confirm, validate one another.

3. The Scandal of Singularity

So imagine the chaos that ensues when there is a discordant note, a single comment that offends. That one discordant note immediately sparks accusations of inattention, of tone-deafness, of malice and sabotage. There is little to gain and a lot to lose in breaking rank.

If this makes preaching to the choir seem worthless and/or hopeless, then consider the following suggestions for avoiding these dangers:

If the boundaries are not absolute, then there’s a possibility of ingress and egress, which means that the bubble of security and sufficiency created by self-selection is popped. Preaching presumes in its audience a gap between what it is and what it should be. In other words, preaching can become personal—i.e., meaningful—only once the difference is not between “us and them” but between “the old man” and “the new man.”

Agreement, unity of mind, is a gift. But it does depend on what sort. The agreement of conformity excludes conversation. Truths bouncing around in an echo chamber are no less true, but their meaning, what they have to tell us, is certainly less clear. But truth demands conversation: dialogue, not monologue. To possess the truth in common doesn’t require that we first become identical, but that we allow the truth to make us one.

3. Crisis for the Sake of Conversion

Preaching should scandalize. Not for its own sake, of course, but for the sake of conversion. In facing the choir, those in fundamental agreement with you, it’s a task of the prophet—which we are by baptism—to speak boldly, to take a chisel to the collective complacency and vigorously follow the slant of light that shines through the crack. The truth always wants us to go deeper within, and further afield.

Not one of us is without need for conversion of heart and mind. We can never shirk the task of preaching to the choir, because even the choir needs to be converted.