Menu
Confraternity of the Most Holy Rosary > Uncategorized > Pious Patriotism 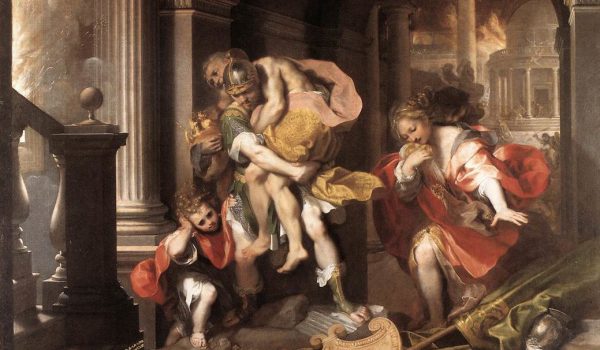 This day in the United States is often marked by an outpouring of patriotic fervor. But in troubled times (which are, perhaps, every time), it can be difficult to square patriotism with devotion to God, or even simply with right reason. For some, patriotism must be tempered by discomfort with this nation’s stances on, for example, military action, marriage, or immigration.

Saint Thomas Aquinas’s time was no less conflicted, and his own family was caught up in a political struggle between secular lord and pope. Nonetheless, he asserts that each man is a debtor to his country, and he places the paying of this debt under the virtue of piety. He is here adapting the ancient Roman notion of pietas, which included honor given to the gods, to parents, and to country. Saint Thomas even goes so far as to argue that one cannot properly worship God unless he also honors his country, for the greater virtue (religion, honor to God) includes the lesser (piety, honor to parents and country).

Given the importance of this virtue, how can one be properly patriotic in difficult circumstances? Saint Thomas’s discussion of piety suggests two ways of thinking about patriotism more carefully. First, he discusses the proper relationship between patriotism and religion. Second, he notes that the virtue of piety extends to individuals rather than to a nation as a whole.

Saint Thomas asks whether “the duties of piety … should be omitted for the sake of religion.” He looks in particular at the case of one’s duties to one’s parents, as this is a case that is discussed in the Gospels, but his final conclusion applies both to filial piety and to patriotism. In response to this question, Saint Thomas observes that piety and religion (in the sense of piety directed to God) are both virtues. But “no virtue is opposed to another virtue, since … ‘good is not opposed to good.’” That is, in any case in which patriotism and religion seem opposed, the reality is that true patriotism requires that one obey the demands of religion; breaking the law of God in order to be patriotic is actually a contradiction.

In a few places in his discussion of piety, Saint Thomas notes that piety is directed towards individuals. He argues that the debt that man owes to his country—the source of governance parallel to one’s parents as the source of life—is to be paid to one’s fellow citizens rather than to the concept of “nation.” Saint Thomas also observes that while legal justice is certainly important in the operation of a country, its demands on the citizen do not fall under the obligations of patriotism but rather under justice in general. Our obligation to patriotism follows from the fact that our country has given us the governance and stability necessary for our being; we thus owe respect and honor to our country in the persons of our fellow citizens. However, we do not owe respect and honor to every particular law or policy of the nation. While men living in a republic should strive to make its government just, this is not specifically the concern of patriotism. Instead, a citizen is patriotic by having a special regard for his fellow citizens.

These two considerations, that the virtues of religion and patriotism can never truly conflict and that patriotism is directed towards individuals, can help the uncomfortable patriot better celebrate days such as today. While it is very good to have concern for the general legal justice of one’s country, one’s obligation to patriotism extends rather to individual relationships. We can thus properly honor our country by honoring especially our fellow citizens who represent the service of governance and stability that the nation provides. For example, it is traditional to honor soldiers on civic holidays, and this is a laudable patriotic practice. It is also good to honor public safety workers, teachers, and even garbage collectors (hopefully they have the day off). In this way, the Christian can be truly patriotic despite his healthy discomfort with some aspects of his country.