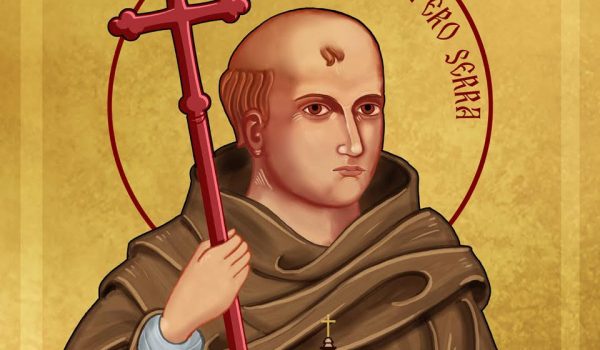 Last year many of us Dominican friars here in D.C. were fortunate to attend the canonization Mass of Saint Junipero Serra officiated by Pope Francis. Serra, a Franciscan friar and the “Apostle to California” whose feast we celebrate today, was a native of the Spanish island of Majorca. He joined the Franciscan Order at an early age and thrived as a friar. After being ordained and earning his doctorate, he received a university position as a professor. On his way to a prestigious life within the Church and academy, Serra heard God calling him to evangelize the New World. Serra gave up a promising academic career, family, and friends to follow this call. This led him to Mexico and California where he established many missions and evangelized local peoples.

Serra was a successful missionary with a host of accomplishments. But rather than focus on this aspect of Serra, Pope Francis devoted a large portion of his canonization homily to a discussion of apathy. I think there are a few reasons Francis brought this up in the context of this saint’s canonization.

First, modern man is afflicted by apathy in a particular way. Modern poetry, literature, and film are filled with examples of man’s struggle with boredom. Francis spoke of this ailment in terms of a numbing of the heart. Many people today are out of touch with their own hearts. An unfortunate logical result of such a situation is apathy. If my heart is my guide in life—if I achieve happiness by following my heart—but I cannot feel my heart, then I will lack direction and purpose. Being rudderless and numb will diminish desire. And if I lack desire, I will stop caring. Such torpor is what we call apathy.

The next reason is that apathy is an obstacle to evangelization. If I do not care about the spiritual life—this is the definition of acedia—then I will not wish to tell others about it. And what happens when a large swath of Christians stop caring about the spiritual life? We all of a sudden lack missionaries such as Junipero Serra. This can have a snowball effect. The more apathy out there, the fewer there are who share the Gospel. And the less people hear the Gospel, the more apathy there will be. And so on and so on…

Francis asked, “What can we do to keep our heart from growing numb, becoming anesthetized?” The third and main reason I believe Francis discussed apathy in his homily on Saint Junipero is that evangelization is an antidote to apathy. Francis recalled what Jesus said to his disciples and what he says to us today: “Go forth! Proclaim! The joy of the Gospel is something to be experienced, something to be known and lived only through giving it away, through giving ourselves away.” In sharing the Word of God with others we experience the joy of the Gospel. This joy can burst through a calloused heart and awaken it. When we get out of ourselves and encounter others, we begin to dissolve apathy.

So what does Saint Junipero have to do with apathy? Nothing. He cared deeply about the mission that the Lord and the Church entrusted him with. He had zeal for sharing the Gospel. And for us who struggle with apathy, we have in him an example of someone who followed his heart as he listened to God and became a saint in the process.


After Mercy
As she crossed the threshold, she breathed again. One, long, deep breath. Moments earlier, a powerful surge, unseen, unheard, whisked away her burden untold. Her tears and her shame had been met with the simple words: “I absolve you…”

Ever since Jesus gave the power of forgiveness to the Apostles, the Church has poured out the mercy of God. Right now, that mercy is abundant. First of all, it’s the Jubilee Year of Mercy. Pope Francis is opening…