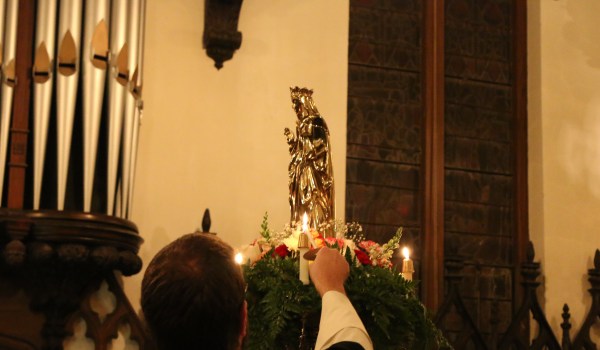 One week until Christmas. Decorations are everywhere. Shopping is shifting from hurried to frantic. There are preparations for travel and guests, for parties and feasts. The expectation is palpable.

Even the Church, in her liturgy, has shifted into high gear. The normal flow of Advent, already overflowing with a sense of longing and preparation, was preempted yesterday eight days before Christmas. The gospel readings begin to recount the events immediately preceding the Nativity and the great “O” antiphons place us in the mindset of the Old Testament prophets, using their Messianic imagery to beg the Lord to come. Here too, the expectation is palpable.

Since the seventh century, this day, one week from the feast of the Nativity, has had a particularly heightened link to this anticipation in that it was set aside to honor the Virgin Mary as Our Lady of the Expectation. It has been some time since the feast of the Annunciation (March 25), which celebrates Mary’s “Fiat” and the coming of the Word of God in the flesh, but we have not yet reached Christmas, which rejoices in His birth and first manifestation to the world. This feast of Our Lady of the Expectation takes the opportunity to contemplate the great longing and anticipation of Advent, in which “all creation is groaning in labor pains,” through the eyes of her who, above all creatures, longed to see the face of Christ, and whose expectation truly was palpable in every fiber of her body.

The bond of mother and child is one of the most powerful and significant human experiences. Physically speaking, the new life depends on the mother for every bodily need and the body of the mother reorients itself, recreates itself, to accept this new life and provide for it. Psychologically, the child’s very first sensations and memories are of the safety and security of its mother’s womb. There is the feeling of warmth and confinement as well as the sound of the mother’s heartbeat and voice. And these feelings of safety and comfort persist in a new way after the child is born. The mother, too, is disposed to love her child whose being and welfare are as present to her mind as they are to her body. This maternal love is a supreme natural image of pure and unconditional love, an image of the love of the Creator for His creation.

All of these insights into motherhood in general apply in the most eminent way to Mary and the Word made flesh, made from her flesh and being formed in her womb for nine months. As great as this natural, maternal bond was, the Fathers of the Church considered Mary’s spiritual union with her Son, her discipleship, as even more important. According to St. Augustine, “She kept truth safe in her mind even better than she kept flesh safe in her womb. Christ is truth, Christ is flesh; Christ as truth was in Mary’s mind, Christ as flesh in Mary’s womb; that which is in the mind is greater than what is carried in the womb.” From the moment of the Annunciation, every aspect of Mary’s humanity, body and soul, was suffused with love for her Son and more and more perfectly united to Him. As His Nativity approached, that love overflowed in a calm yet powerful longing, an expectation, to look on the face of her Son, the Word made flesh.

While Our Lady of the Expectation is no longer celebrated on the universal calendar, the devotion has a special significance here at the Dominican House of Studies. In the center of our chapel stands the “Lady Lectern” which is crowned with a magnificent brass statue of Our Lady of the Expectation, peaceful and stately, yet bearing the Word in the quiet activity of pregnancy. The statue is known to be a gift from the friars in Belgium, but it is unclear why they chose that particular image, which is not traditionally associated with the Immaculate Conception, the patroness of the priory. Nevertheless, over the years friars have found Our Lady of the Expectation a fitting symbol to adorn a Dominican chapel, most especially that of a House of Studies.

The word of the Gospel does not simply come forth fully formed from the mouth of preachers without any preparation. To truly be fruitful there must be a period of contemplation, of silent preparation during which the Word takes shape in the preacher’s mind and, more importantly, he is drawn ever closer to the Word. This is especially true of the student brother in formation, whose Dominican life has been conceived in the profession of vows, but has not yet been born, has not yet been made manifest to the world in preaching. This period of waiting can sometimes feel simply busy but not productive. In truth, this formation is meant to be a time of inner growth and activity, laying the foundation for a healthy Dominican life, united to and overflowing with the Word.

While the festivities of Christmas last only a short time, the love that Mary had for her Son, which overflowed in such expectation, did not end at His birth but continued to grow and deepen in new ways. In these last days of Advent, may we unite ourselves to Our Heavenly Mother and ask her to teach us the patience and docility needed to bear Christ in our hearts, trusting that the Word will bear fruit in our lives.