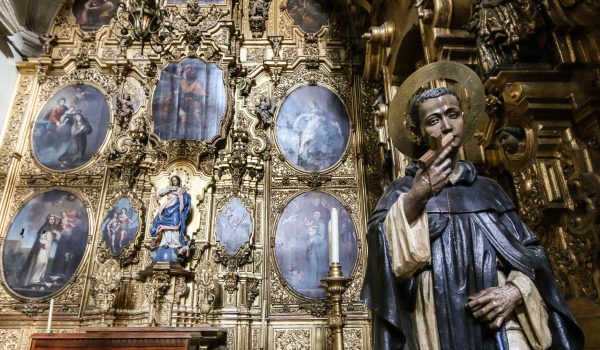 He never met a miracle he didn’t like. That is to say, St. Martin de Porres was a prolific miracle-worker. In his meekness he never tried to draw attention to the marvels he worked, but his miraculous output, prodigious as it was, got him noticed.

Martin could bilocate and levitate during prayer, but my favorite category of miraculous activity involves his dealings with Lima’s diverse animal population. Dogs and cats, bulls and rats, mules and mice—whether wild or domestic, wounded or vicious—all received Martin’s saintly care. And where Martin exercised charity, God supplied miracles.

A curious theme emerges in accounts of the wonders Martin worked with animals. Witnesses repeatedly comment that Martin’s kindness seemed to elevate the animals’ nature, making them appear almost human. For example, when the novices brought two bulls into the convent for a mock bullfight (kids those days) and the antagonized bovines started to attack for real, Martin came to the rescue—by reasoning with the bulls. They heard him out and obeyed. Giving them a snack, Martin instructed the elder bull to let the younger eat first, as was the common practice in the convent. The bull respectfully complied, and nuzzled Martin as if kissing his habit, we are told.

In another episode, Martin negotiated a treaty of sorts with the convent’s rodent population. Too many mice had found their way into the building and were causing significant damage. Then one day Martin was seen ushering an orderly regiment, consisting of several hundred mice, outside to the garden. There he explained he would feed them once a day if they stayed outdoors.

Such accounts (and there are a good number more) may sound like the stuff of pious legend. Did they really happen? The sheer number of eyewitness reports should testify to their authenticity. Yet still, what’s their point? I think St. Martin’s miraculous authority over animals speaks to our beginning and our end—where we’ve been and where we’re (hopefully) going. They gesture toward the order and harmony constitutive of mankind’s original, and final, glory. And they point the way to get there.

“Think where man’s glory most begins and ends,” advised William Butler Yeats. It begins with God. Created in His image, as Genesis 1:26-28 conveys it so beautifully, mankind was originally given “dominion over the fish of the sea and over the birds of the air and over every living thing that moves upon the earth.” Created in His image, then, mankind became His representative on earth, designed to rule over and care for other creatures. This authority was a sign of God’s love, as St. John Chrysostom stresses in a homily: “realize the extent of the esteem and the Lord’s magnanimity toward [man] and be amazed at his love beyond all telling.”

Implied in Genesis 1:28 is that the other creatures would be responsive to human authority, just as animals were to St. Martin. Although original sin compromised man’s natural dominion, Martin, in his holiness, was given a divine gift reminiscent of that original authority.

As noted, Martin’s miraculous sway over animals seemed to elevate their activity. At the end of time, God will elevate creation, transforming it into what Sacred Scripture calls the “new heavens and a new earth” (2 Pet 3:13, Rev 21:1). In Christ, God redeemed what He created. In the Holy Spirit, He will perfect what He redeemed. “We shall all together constitute one variegated creation, one cosmos, one exultant choir, plunged into the splendor of God’s glory,” writes Erasmo Leiva-Merikakis. In some small, analogous way, I think, St. Martin’s miraculous ability anticipates this future glory, this ultimate and enduring elevation experienced by God’s elect (CCC 1042-1047).

St. Martin could control the beasts without because, like all the saints, he tamed the beasts within. We are called to do the same. Sometimes we foolishly open the soul’s backdoor to the bulls of prideful anger. The mice of vainglory creep in. The hogs of sloth plop down. To drive them out we must invite Another in. To let in the Lamb turns the stable into a sanctuary.