I don’t understand running. I mean, if you’re being chased by a bear, sure, by all means, run. Or playing sports? Of course. But going out to run for fun? I don’t get it. That’s an awful lot of energy to exert just to end up back where you started. I know some of my brothers probably disagree with me on this one, but I really don’t get it. I guess fitness is a pretty good reason to run, and I’ve heard that there’s a runner’s high if you keep it up for long enough, but that sure isn’t enough to get me to lace up my sneakers and go for a jog.

This is how the world seems to view the Christian life. They don’t see the point. Obviously you should be a good person if there’s reason to be, but if not, then just do what pleases you. The Christian life comes with an awful lot of rules to follow, and we all end up in the grave anyway, so why bother? Of course, if being a Christian makes you happy or motivates you to “be a good person,” then, by all means, go for it. But don’t try to make me run beside you.

St. John tells us in his first letter, “The reason why the world does not know us is that it did not know him.” God is our creator, the one who loved us so much that, before we were even a thought in our parents’ mind, he desired to create us. And knowing that, as a truth by which we live our lives rather than as an abstract idea, inspires us to give all we can back to him. But knowing this requires effort: time spent in prayer, attendance at Mass, even simply asking God to give you the grace to know him. These simple tasks seem burdensome to many, but once undertaken, they lead to a joy beyond all others.

Have you given God that chance? Are you, as St. Paul says, running the race? If we give God the chance to love us, he will let us know just how much he does. And once we experience his love, the source of our joy, all those so-called rules become the markers on the path to our joy. Mass is no longer a burdensome hour on Sunday, but rather the highlight of the week. Taking time in prayer to speak to God is no longer a chore, but rather necessary training for the marathon that is the Christian life.

Nowadays, it seems, all too few people give God that chance. Christianity is viewed as burdensome, a nuisance. Like the New York City Marathon, Holy Mother Church tries to close down streets and redirect traffic. But if the Marathon did not close down streets, it would cease to be the Marathon. People could run where they chose, and all could claim victory. St. Paul tells us, however, that “all the runners compete, but only one receives the prize.”

Nobody today minds if you go out for a morning jog; they may even praise you for the effort. But if your running interferes with their life, they call foul, and likewise with religion. If these people gave God the chance to let them know how much he loves them, they would be the first people at the starting line, rather than grumbling about the closed streets. The marathon will go on, and God would love nothing more than to see all his children run the race. 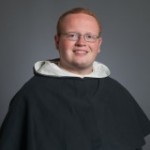 Br. Stephen Ruhl was born and raised on Long Island. He attended Providence College, graduating in 2015 with a degree in French. He entered the Order of Preachers shortly after graduation. On DominicanFriars.org