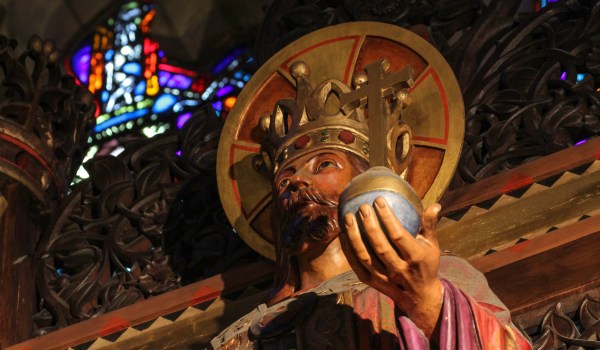 “The Lord, our All-Powerful God, is King; let us rejoice, sing praise, and give Him glory! Alleluia!”

In our society of the popular vote, rejoicing under the domination of a king is inconceivable. We view kings as despotic and tyrannical, the scourge of the medieval world, and the bane of many a hapless peasant. Even God himself tells his people that they will rue the day that they asked for a king (1 Samuel 8). And yet, the Lord God is called “king” throughout the Old and New Testaments. What can we make of all this royal language? Why should we rejoice in having God as king?

Part of our difficulty in expecting joy under a king is the known corruption of human kings. Power corrupts, so any time one of us fallen humans rises to absolute authority over a whole people, we abuse that power. The king often will direct his citizens to serve his whims against their best interests. Even the incorrupt king is still fallible. He may think that he is acting for the common good, but err in judgment and hence harm his subjects despite his good intention.

While these revulsions justify our abhorrence of earthly kings, they do not pertain to the kingship of God. God is neither wicked nor fallible, but omnibenevolent, loving his subjects perfectly. He never acts selfishly, nor can he who is perfect wisdom ever err in willing and bringing about the true good.

There must be some other reason for our resistance to the divine kingship. Should an earthly king act selflessly and for his people, we could still struggle to humble ourselves beneath him; we could complain or revolt. We are proud, sinful, and weak, and so we tend to rebel. The problem is with us as subjects, not the king as ruler, and it carries over to the notion of God as king. We don’t want to submit to his gracious will because our own unruly wills dominate our lives. We rebel against his wise authority because we want to be our own authority.

Despite our pride, when we come to know God in his love and mercy, we can rejoice that God is king. As autonomous individuals, we incessantly worry about so many things. We fear our own weakness and frailty, our corrupt wills and proud spirits, our capacity for errors in judgment and incapacity to will the good we perceive to be right. We fear that we will fail. We fear our own smallness. Having God as king frees us from these nagging fears because we rest in the understanding that neither our malicious will nor our ignorant intellect is ultimately in charge. With God as king, we need not fear the terrors of tomorrow by night, nor the arrows of criticism that fly by day, nor the difficult decisions that prowl in the darkness of our mind, nor the scourge of slander that lays waste our self-confidence at noon (Psalm 91). In recognizing that God is in charge, we are freed from all of these concerns to love God and to serve Him, for He, the perfect king, will protect and rightly direct His own.

There is something freeing in this recognition that we are not ultimately in control, but we ultimately rejoice in the kingship of God because it is born of love expressed in mercy. God’s law over us is just, but flooded with love. The love of the king is so great that when we, by our offense against him who is infinite, merited an infinite punishment, he became man in the person of Jesus Christ to bear that punishment in his own body. Jesus Christ is the manifestation of the mercy of God, freeing us from the punishment that we rightly deserved.

With God as our merciful and loving king, the only thing we have to fear is he himself. Now this fear is twofold. Servile fear obeys the law out of fear of punishment, which is a start, but not enough. Far better is the fear of the loving child, who fears to act against his beloved father lest he cause him pain. We fear God out of a profound love of him, which brings forth a desire to please him, a desire to express our love for him in our every act.

And so we are made free. Free from any fear of things that cause no lasting harm and free to follow our king and father wherever he may lead, even to His very throne in Heaven. God is king and I am not; thank God for that.