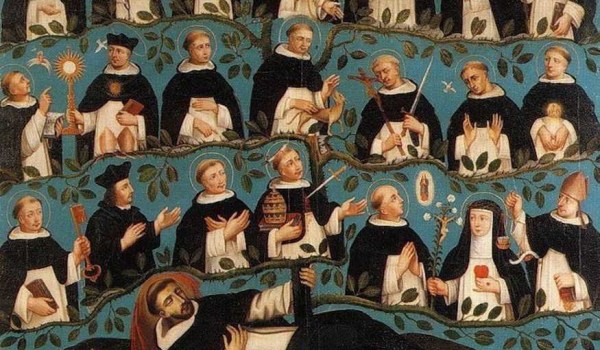 A new biography of Dominican saints has recently been published, Dr. Kevin Vost’s Hounds of the Lord (Sophia Institute Press, 2015)—the title based on an early Latin nickname for the Order, Domini canes, dogs of the Lord. Though educated by Dominicans as a young boy, the idea for his present book came from a bookmark, given him by the Nashville Dominican sisters, announcing the Order’s 800th Jubilee. The fruit of his labor is both fun and intelligent, accessible and informative, full of quaint stories and Thomistic theology woven together.

To begin at the beginning, we can defy cliché warnings and “read the book by its cover.” That’s because it’s a great cover. The image, called “The Genealogical Tree of St. Dominic” (pictured above and, in its entirety, below), is an oil painting on wood, and dates from 1675. It is the work of J. Rolbels and now adorns the Swiss monastery of Dominican sisters at Estavayer-le-Lac.

Here is the first lesson of the book (and painting): saints are made saints together. Not only do their examples inspire us today, but they inspired each other while still living. Many of these Dominicans knew each other personally, all part of one intertwining family tree. Take one branch of the tree, for instance, the early Dominicans:

All Dominicans, all on the same tree.

Vost’s biography shows how Dominic’s greatness is not personal achievement. The saint, who died young, was a saint with “faith in the future.” He is like the trunk or rootstock of the family tree, whose own holy desires blossom in the lives of his sons and daughters:

After the early years, the charism of Dominic and the theology of Thomas grew into a great tree that has spanned hundreds of years and across many seas to the New World. Rose of Lima and Martin de Porres were contemporaries in Lima, Peru (they were even confirmed by the same bishop). Even there Dominican preaching was well known, and as children, each saint learned the teachings of Catherine of Siena, who herself learned Thomas’s theology and dressed it in her own passionate language. The biography ends with Pier Giorgio Frassati, an athlete and a student, who died with a copy of Catherine’s Dialogues at his bedside table.

Finally, if theology or history aren’t your keenest interest, there are plenty of colorful stories to keep you turning the pages, including but not limited to:

So if you’ve heard the name St. Dominic but don’t know much about him or his family, check out Kevin Vost’s biography. There you can begin to learn more of a history 800 years strong and still growing!

Thanks to the sisters, we can now identify the many saints depicted in this Dominican family tree. They graciously contacted the Dominican friars of Rue Saint-Jacques, Paris, who located in their archives a Flemish engraving (by Théodore Gall, d. 1663) of the same painting and containing the names of all but one saint. 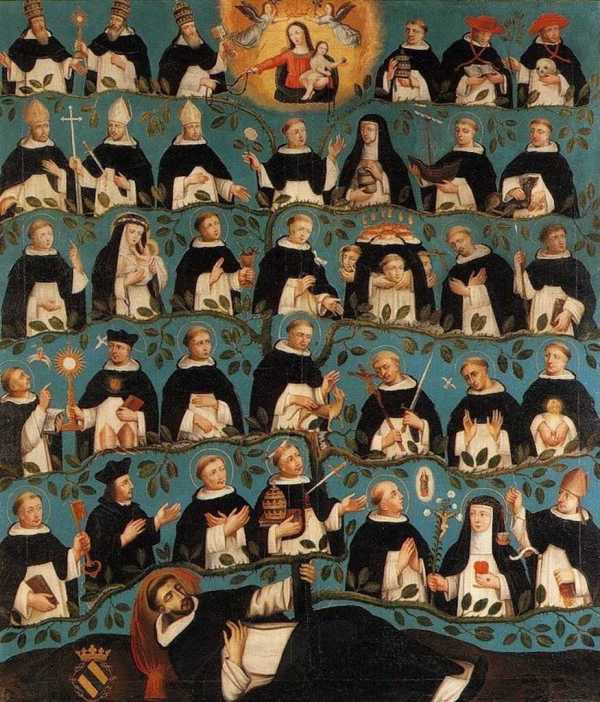