Menu
Confraternity of the Most Holy Rosary > Uncategorized > Christ, Under Construction 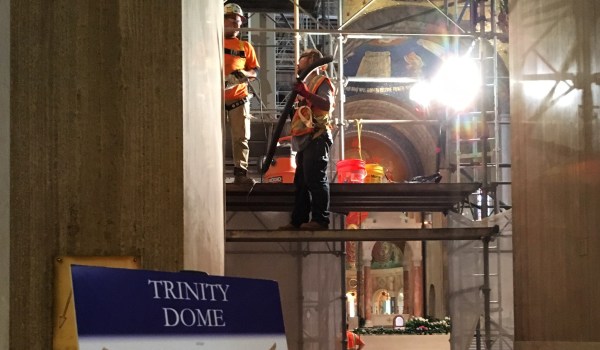 Across the street from the Dominican House of Studies, the Basilica of the National Shrine of the Immaculate Conception, one of the largest Catholic churches in the entire world, dominates the skyline with its tremendous tower and signature blue dome. Tens of thousands of people come each year to worship God and to invoke the intercession of the Mother of God. Yet visitors to the Shrine for the next year and a half will discover a peculiar intrusion: metal pipes and plywood boards stacked high to the ceiling at the heart of the Basilica for a new construction project. This lengthy endeavor can put the phrase “building up the Church” into a whole new perspective.

The construction of the Shrine of the Immaculate Conception has been an enormous undertaking.  It has required nearly a century of on-site skills and manpower to lay each chiseled stone and to place every last piece of tile in the walls and ceiling alike. Thousands of donors (with memorial plaques including even George Herman “Babe” Ruth) contributed in big and small ways to provide those resources. The construction began in 1920, and Mass was first celebrated there in 1924. Major construction delays occurred due to the Great Depression and World War II. The main building was completed in 1959. Since then, several other chapels and bas-reliefs have filled in some of the open spaces. The current project underway is the installation of a mosaic in the central dome, set to be completed in December 2017. (The two other domes were tiled in 2006 and 2007, respectively.) The mosaic’s design is to include the Creed and a number of saints including John Paul II, Martin de Porres, and Kateri Tekakwitha. The Creed and saints show the importance of the spiritual unity of the members for whom the physical building is home. Christians are the “living stones” of the Church on earth.

Like living stones be yourselves built into a spiritual house, to be a holy priesthood, to offer spiritual sacrifices acceptable to God through Jesus Christ. (1 Peter 2:5)

This Saturday, beneath the stories-high scaffolding, 11 Dominican friars will be presented to Archbishop Augustine Di Noia, O.P., to be ordained priests of Jesus Christ. Building up the Mystical Body of Christ, these men, by virtue of their ordination, will be transformed so as to become Christ’s representatives and to act in persona Christi, “in the person of Christ.” The priest is alter Christus, “another Christ,” and is commissioned by God and the Church to serve souls through his sacramental ministry.

“May God who has begun the good work in you bring it to fulfillment”: these words are proclaimed by the ordaining bishop during the Rite of Ordination just moments before those to be ordained prostrate themselves to invoke the intercession of the saints. In this petition, the bishop prays that the years of formation which the ordinandi (those to be ordained) have undergone and the graces which have led them to this point may achieve their consummation in this ordination. As the Shrine is capped with a mosaic representing the Mystical Body of Christ, the ordinandi will receive the grace whereby they will be united to Christ the Head of the Church.

This weekend, we pray that our 11 friars will receive an outpouring of the Holy Spirit for the strength and grace to be perfectly united to Jesus Christ, the Great High Priest and Chief Shepherd of the flock.

Image: Fr. Lawrence Lew O.P., The Basilica of the National Shrine of the Immaculate Conception (used with permission)