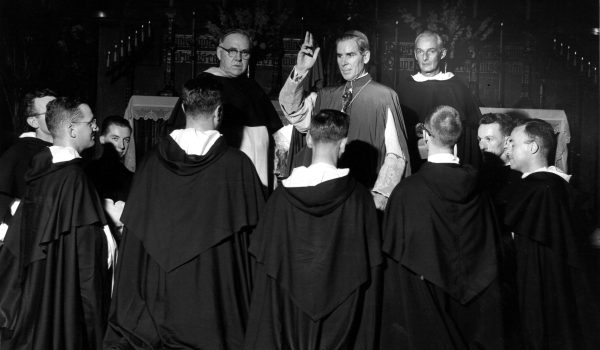 When Brother Thomas Aquinas joined the Dominican Order at the age of 16, he never imagined that within four years he would bring the Gospel to violence-torn Pakistan.

Today, if you were to run into Brother Thomas Aquinas in New York City (where he’s currently assigned), it’d be difficult to imagine just how remarkable a life he’s led as a Dominican cooperator brother.

At the age of 20, Brother Thomas Aquinas Dolan knelt before Bishop Fulton Sheen to receive his blessing before traveling to Pakistan as a missionary. Bishop Sheen warned them that some of them might die over there in the service of Christ (much to the concern of the missionaries’ mothers sitting in the front row of the church).

Religious violence was indeed widespread. Pakistan had just gone through a bloody partition that left hundred of thousands (if not millions) dead, while displacing even more. So Brother Thomas Aquinas took Bishop Sheen’s warning to heart.

Upon arriving in Pakistan, he and his fellow friars encountered a man who frankly and directly asked if they were Christians. Fearing the worst, but affirming their faith in Jesus Christ, they confessed that they were indeed Christians. To their surprise, the man fell on the ground and began to kiss the bottom of their tunics.

The man was also a Christian and was staying in a nearby refugee camp. The Christians were facing starvation because the Muslim authorities were denying them food on account of their religion. Brother Thomas Aquinas and his fellow friars quickly contacted Catholic Relief Services who in turn sent boxcars of food to relieve the suffering of the Christian refugees.

Brother Thomas Aquinas was initially deeply hesitant about volunteering to go to Pakistan. He joined the Dominican Order at the young age of 16 and became a cooperator brother. After spending a few years studying and working, his superior encouraged him to write a letter to the Provincial volunteering to go to Pakistan as a missionary. Less than a week after sending his letter, he received a reply telling him to pack his things.

He would end up spending 33 years in Pakistan. The mission territory that they were given was similar in size to New York and New England put together. But it came with no churches, no religious houses, and—they thought—no Christians. Many of the Christians they discovered had converted after hearing some revival preaching generations before in British India. These men and women had dedicated themselves to Jesus Christ and passed down the faith from generation to generation, although with no churches and little catechesis.

That is where Brother Thomas Aquinas came in.

While in Pakistan, Brother Thomas Aquinas designed and built countless churches, religious houses, hospitals, and even whole villages. He served as a parish administrator for multiple parishes, taught catechism classes to children, taught at the major seminary, and served as the director of the pre-novitiate program for the Dominicans. He was even ordained a deacon at the behest of the local bishops.

Brother Thomas Aquinas’s faithful obedience in going to Pakistan despite his initial reluctance is a testament to his vocation. To his joyful surprise, he not only helped to spread the Faith in Pakistan; he was also able to grow closer to Christ, who was obedient to the Father. The submission of the will to God and his ministers on earth helps to form a Dominican friar, and any religious, to receive a foretaste of the fullness of joy that awaits the blessed in heaven. Brother Thomas Aquinas continues to spread the joy he has been blessed with to all those who have the privilege of meeting him.

These days he can be found at St. Catherine of Siena Priory in New York City helping out with the many needs of the parish and extending kindness to the homeless.