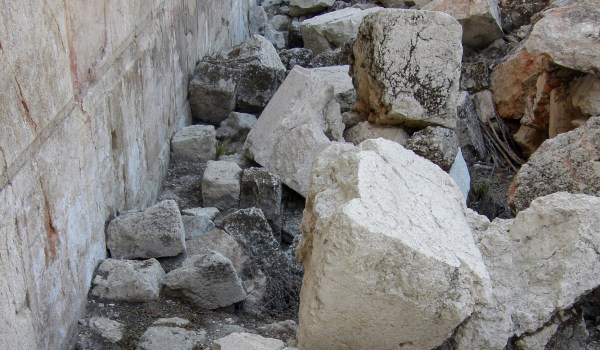 Lucius walked the dusty streets, twisting his fingers in careful patterns, practicing yesterday’s lesson. He was a clever and talented student, so the pebble he was looking at obediently skipped alongside him. By now the route was familiar, although he remained fascinated by the great stone bridges that connected his father’s barracks to the courtyard surrounding Herod’s Temple. Then, careful to stay close to the outside walls and out of the way of the Temple itself—you never knew which pious prophet beggar might accost you—through the vast basilica, seat of commerce and government, and finally down the great staircase into the city. Now moving his whole hand and muttering some words, he experimented with turning the shadows of passers-by red just briefly enough that they couldn’t be sure what they’d seen. Not that anyone would suspect a ten-year-old of being capable of such an art.

He was so absorbed in this game that he didn’t notice the small family walking back along the way he had come, toward the Temple Mount. Their young daughter was certainly noticed, however. Just old enough to have started walking, her innocent smile and surprising beauty charmed vendors into giving her first bread, then a sip of wine, then a morsel of freshly-roasted fish. Her parents gazed at her lovingly, but the observant eye could detect a hint of sorrow.

With an open toddler’s smile and clumsy wave, she returned to her parents. Her father picked her up and they continued on their way.

Lucius carefully stopped his tricks as soon as his master’s house came into view. The door swung open to admit him, and he stepped inside. His master was reading an old scroll, so engaged that he did not acknowledge his student for several moments. Once observed, Lucius’s lesson began promptly. After the usual exercises and a review of the previous day’s work, Lucius could restrain his curiosity no longer.

“Master, what were you reading?”

“Ah, my son, I was reading a study of the voices of stones. There is a question of whether they can learn tongues other than their own.”

“Stones have a language?”

“Yes, as do the trees. From them the patient man can learn much wisdom.”

“That, Lucius, I will not do. Once you allow a stone to speak, it will speak to you forever, and you are too young for such a fate.”

“Then perhaps you can show me? With just this small pebble? We can toss it down a well when we’re done, so I won’t have to hear it forever!”

There was a loud knock at the door. The master sighed.

“Very well. But you must not watch what I do, nor attempt to repeat it. And we shall use this to practice your language work: memorize and recite to me whatever your pebble says.”

The master stepped away to answer the door—a royal emissary. He gave the messenger a seat and returned to Lucius. Picking up the pebble that Lucius had suggested, the master turned his back on Lucius, such that he stood between Lucius and the pebble. He placed the pebble on a low table and began his work. Lucius could not see his hands, but the words demanded to be spoken loudly. Lucius did not recognize the language—he supposed it must be Stone—but he had spent many hours learning to repeat strange tongues even more accurately than their native speakers.

Suddenly the master turned and pointed at Lucius with one last complicated twist of his thumb. As the master stepped away to speak with his visitor, a low, undulating noise flickered into being inside Lucius’s head. It was indistinct at first, but soon Lucius could distinguish a repeating pattern of three syllables over the continuous rumbling in the background. In a few minutes, he had memorized these, and he began to sing along.

The master glanced over at him, frowning. Lucius picked up another stone and looked at him hopefully. The master apologized to the messenger and turned toward the stone Lucius was holding to repeat the spell. This new stone joined the first in a kind of deep, slow harmony. Again, after a few minutes of silent concentration, Lucius joined in, sometimes following the first part and sometimes the second. His master gave him an angry glare, wove his fingers together, and put a wall between Lucius’s song and his own conversation.

When the wall disappeared, Lucius spoke to his master excitedly.

The door swung open, and Lucius obediently stepped back into the street, taking the two singing stones with him. He immediately picked up a third, but he could only give it a faint voice, even after he drowned the other two as he had planned. Undeterred, he tried to speak to the fish-monger’s chopping block and the wine-seller’s house, but to no avail.

He climbed back up toward the basilica, engrossed in his all-too-brief memory of the master’s work with the second stone, trying to recall every last detail. As he was crossing in front of the Temple, he tripped over a beggar lying on the ground. The beggar jumped up, shouting and gesticulating wildly. Lucius responded with the first thing that came to mind: he rapidly twisted his arms, shouted something loud and deep, and turned his thumb through a curve that took in the courtyard, the beggar, the Temple, and finally himself.

The beggar yelped and fled. Lucius took a deep breath, and, looking around to see if anyone had noticed, hastily set off for home once more. But he soon became aware of a joyful but rough rumbling in the back of his head. He paused in awe. The stones of the entire Mount, from foundations to courtyard, were chanting a quiet, slow song of sheer bliss.

Some ten years later, returned from studies abroad, Lucius stopped to see his old master on his way back home. He smiled as memories returned on his walk from his master’s house to the Mount. The statue he had made invisible was still standing in a garden. The wine-seller’s nephew, who had taken over the shop, eagerly gave him a cup filled from the very jar that he had once repaired—and whose spilled contents he had restored.

While he climbed the stairs to the basilica, he grew thoughtful. As time had gone by, the stones had quieted but never faded entirely: his morning walk had always begun with a soft chorus of joyous song. Would they still be singing after these many years? Or would they have lost their voice? He had since learned that his master had been mistaken, the voice of stones is not forever. Lucius entered the courtyard and paused.

Silence. The usual noises of the crowd—today an old man and an old woman were the prophets on display—but not the familiar voice of the stones.

Suddenly a pounding, intense roar filled his head. He dimly realized that he had fallen over and spilled his wine all over the ground, but the noise so filled his head that even this much thinking was nearly impossible.

And yet he was calm. In his travels, Lucius had heard the songs of victory arches and of statues of gods—even of the gems in the Emperor’s palace. Nothing compared to this. The joy of these stones was too great even for words in their own speech. Theirs was a simple shout of primeval fulfillment felt in the depth of one’s being, stone and man.

Lucius lay back on the stones, closed his eyes, and lost himself in the clamor. The shouts of the old man and old woman faded into the chorus of happiness, and he did not see the quiet but radiant family—father, mother, and baby boy—as they left the Temple and walked by him. For now, he was at peace.

Image: Excavated stones from the Wall of the 2nd Temple (Jerusalem), detail