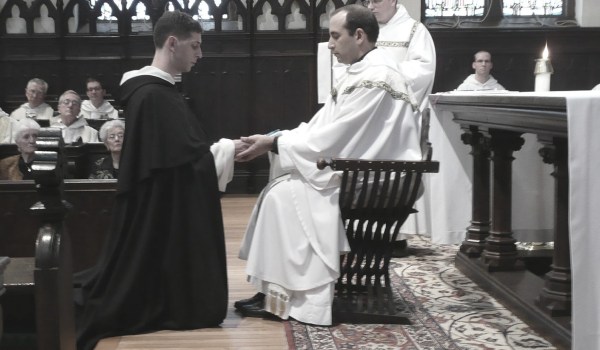 Throughout her history the Church has witnessed the countless ways that God has called men and women to become saints. In his youth, and against the will of his family, St. Thomas Aquinas chose the Dominican life as the surest path for his own sanctity, even though this way of life was still quite novel. In many ways the Order had been wildly successful when he first met it in 1239, twenty-three years after its founding and eighteen since the death of St. Dominic. It had already attracted thousands of men to take the habit and expanded to the very borders of the Christian world. The Order could boast of the support of the pope and many bishops, as well as the sanctity of its founder, but still faced opposition in many quarters that were suspicious of these “cloisterless monks.”

We can only speculate on what exactly attracted St. Thomas to take the Dominican habit, but we know the formula by which he would have embraced his vocation for life:

I, Brother Thomas Aquinas, make profession and promise obedience to God, and to blessed Mary, and to you, brother John of Wildeshausen, Master of the Order of Friars Preachers and your successors, according to the rule of blessed Augustine and the constitutions of the Friars Preachers, that I will be obedient to you and to your successors until death.

Looking at this formula of profession in light of his later writings we can gain a glimpse of what these words, pronounced as a young man, might have meant to the future saint whose feast day the Church celebrates today.

First and foremost, he professed obedience to God. This reflects the ultimate Christian goal of perfect charity, that total love of God and neighbor. St. Thomas argued that while one can avoid all that is contrary to this charity by observing the commandments, the religious life involves an additional setting aside of certain good things which frees religious men and women to “more freely give themselves to God.” Nevertheless he recognized the fact that, unfortunately, there can be “wicked religious” and laity who have attained what he calls the “perfection of life.” Religious life is structured so that by certain objectively holy actions and practices the religious might grow in interior holiness, but not all subjectively attain that goal. Thus, Thomas understood that religious life is called a “state of perfection” not in order to assert the sanctity of everyone in it but rather to acknowledge that by entering religious life, one is “binding himself in perpetuity and with a certain solemnity to things that pertain to perfection.”

Next, he professed obedience to blessed Mary. Practically speaking, this implies nothing beyond obedience to God. Whereas Mary “excels the Angels in her closeness to God,” St. Thomas understood that there is nothing we could do in obedience to Mary that would not also be in obedience to God. Rather, this profession is an acknowledgment of the help and protection that Mary can and does offer us.  She received grace in “such abundance as to be sufficient for the salvation of all men in the world” and “in every work of virtue one can have her as one’s helper.” From the beginning, the Order has looked to the Blessed Virgin as a special patroness and protector, as we can see clearly in the vows formula.

Additionally, St. Thomas professed obedience to the Master of the Order. Dominicans have never understood this to imply that the commands of the religious superior are on the level of the divine. Rather they freely offer their wills to God by placing themselves under a superior, drawing closer as brethren and placing the good of the Church and the Order above their own desires. St. Thomas recognized the need for the religious to be educated and directed in the things that pertain to religious life, trusting that the command of the superior would draw him closer to perfect charity, “provided such things be not contrary to God or to the rule they profess.”

Finally, he professed this obedience “according to the rule of blessed Augustine and the constitutions of the” Order. By reference to this legislation, the profession invokes its articulation of the Dominican life of poverty, chastity, and obedience, and reflects St. Thomas’s later argument that “obedience includes the other vows.” Further, invoking the Rule of Augustine and the Constitutions gave structure to the life by which Thomas would strive, alongside his Dominican brothers, to “have one heart and one mind seeking God” and to be dedicated to “preaching and the salvation of souls.”

This Saturday, eleven brothers and I will follow in the footsteps of eight centuries of Dominicans and profess solemn vows, using almost the same formula as St. Thomas did (a few years after he made vows, the Order added a profession to “blessed Dominic”). By now, the life of the Friars Preachers is a well-known and well-established path to holiness in the Church, with fifty-two canonized friars, hundreds of blesseds, and countless other holy men. Our profession is no guarantee that we will be the next St. Dominic or St. Thomas, nor a proclamation of how holy we already are. In our profession, we are solemnly binding ourselves to God and to the Order, confident that, through the intercession of Mary, Dominic, Thomas Aquinas, and the host of Dominicans in heaven, we can grow in the perfection of charity that our Order was founded to instill, seeking always the salvation of souls, ours and those of the whole world.