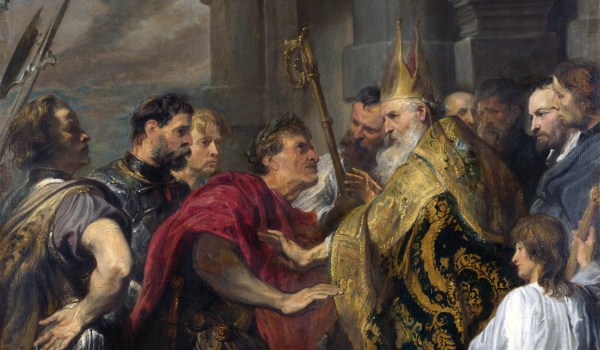 Today, the Church celebrates the feast of one of her great doctors, St. Ambrose of Milan, who offers us a model of public Christian witness.

In 374 A.D, against his own wishes, St. Ambrose became archbishop of Milan, a city riven by the Arian heresy and at that time the residence of one of the Roman co-emperors.  He quickly embraced an ascetical life, gave to the poor, and reformed the liturgy of his diocese.  Enduring many hardships (including, according to the Golden Legend of Bl. James of Voraigne, O.P., an assassination attempt ordered by the Western empress herself), he strove to convert the heretics of his diocese back to belief in the divinity of Christ, soon establishing a reputation as an eloquent speaker and a prolific author on Christian doctrine.  In fact, his intelligent exposition of the Christian faith played an instrumental role in the conversion of St. Augustine, whom St. Ambrose baptized in 387 A.D.

St. Ambrose’s life and writings remain a stirring example of the apostolic life, one combining prayer with tireless effort for the salvation of souls.  Preacher and scholar, liturgical reformer and defender of the poor, refuter of error and loving shepherd of wayward Christians: the holy archbishop of Milan showed the compatibility of roles too often assumed to be mutually exclusive in our present age.

Since we live at a time in which civil authorities are often at odds with Church teachings, perhaps St. Ambrose is most exemplary as a champion of Christianity in the face of civil excesses.  As a prominent churchman and archbishop of an imperial capital, the saint often interacted with the potentates of his day.  On three occasions, St. Ambrose, himself a former magistrate, championed the liberty of the faith in the face of imperial encroachment.  In 385 A.D., he refused to allow Valentinian II to quarter Arian soldiers in a basilica.  In 388 A.D., when a certain bishop expressed his opinion in a way that angered the emperor Theodosius, Ambrose challenged Theodosius’ punishment that the bishop use Church funds to rebuild a house of worship for unbelievers.  Most famously, St. Ambrose excommunicated the Theodosius for ordering the massacre of 7,000 civilians in the city of Thessalonica.  According to St. Augustine, the emperor responded to his chastisement with humility and did penance for his sins; St. Ambrose himself spoke movingly at the emperor’s funeral of the emperor’s contrition for his sin and fortitude in offering public penance.  This of course is the salubrious purpose of ecclesiastical censures: to prevent the sinner from inducing others to sin and to encourage him to repent.

Since ours is a time when civil authorities increasingly countenance — and even engage in — immoral activities, St. Ambrose’s courageous actions show us that Christians cannot remain silent.  All too often, Americans believe that the separation of Church and State necessitates the exclusion of religious belief from the public sphere.  However, St. Ambrose anticipated many of these concerns in a letter pleading with Theodosius not to force the Church to rebuild a non-Christian house of worship: “But it is neither the part of an Emperor to deny liberty of speech, nor of a Bishop not to utter what he thinks.” He continues:

For there is this difference between good and bad rulers, that the good love freedom, the bad slavery.  And there is nothing in a Bishop so offensive in God’s sight, or so base before men, as not freely to declare his opinions… I prefer then, to have fellowship with your Majesty in good rather than in evil; and therefore the silence of a Bishop ought to be displeasing to your Clemency, and his freedom pleasing.  For you will be implicated in the danger of my silence, you will share in the benefits of my outspokenness. I am not then an officious meddler in matters beyond my province, an intruder in the concerns of others, but I comply with my duty, I obey the commandment of our God.  This I do chiefly from love and regard to you, and from a wish to preserve your well-being.  But if I am not believed, or am forbidden to act on this motive, then in truth I speak from fear of offending God. (Ambrose, Epist. XL.2-3, trans. H. Walford, 1881)

By faith, Catholics believe that certain actions, such as murder and perjury, are objectively evil, regardless of whether or not the person performing them is a Christian.  In such cases, it is, in fact, a work of mercy to rebuke the sinner.  Moreover, the Church’s mission is to save all mankind, Catholics and non-Catholics, clergy and rulers, by leading them to accept the deposit of faith entrusted to her.  For this reason, and on account of the superiority of the spiritual to the temporal, Pope Boniface VIII wrote in his bull Unam Sanctam, “It belongs to the spiritual power … to pass judgment [on the earthly power] if it has not been good.”

As Christians, we are called to be signs of contradiction.  At times, this can mean speaking against the decisions of civil authorities, not seditiously, but for the salvation of all concerned.  Doing so, however, in no way diminishes the dignity of Church or State by confusing what ought to remain separate; rather, it affirms the universal scope of the Christian faith and the integrity of all aspects of Christian living, spiritual and political.  Let us pray then, through the intercession of St. Ambrose, to be faithful citizens.