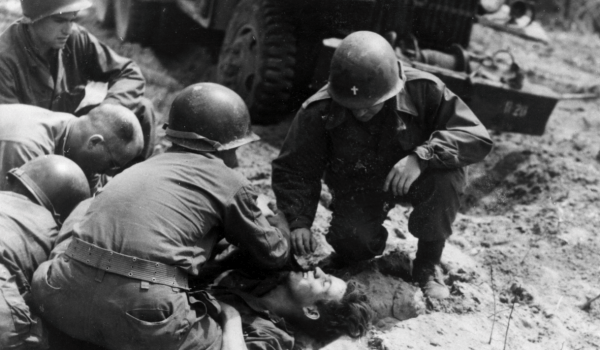 Today we celebrate the 241st birthday of the U.S. Army Chaplain Corps. Established by the Continental Congress on July 29, 1775, only fifteen days after the creation of the Continental Army on July 14, the Chaplain Corps continues its important work today. Chaplains serve all branches of the U.S. military. There are Navy chaplains, founded in November 1775, who serve the men and women in the Navy, as well as the Marines, the Coast Guard, and the Merchant Marine. The U.S. Air Force received its own chaplain corps in 1949. Chaplains also support troops in other military organizations, including Reserve and National Guard units.

In all of our Armed Forces, chaplains provide an important role. Chaplains are ordained or accredited clergy in their faith tradition, and they also accept commissions as officers in the military. They play an important bridging role between religions and the military. The motto of the Army Chaplain Corps reflects this: Pro Deo Et Patria (For God and Country). First, they connect the faith community with the military. Ritually and religiously, chaplains are obedient to their respective religious governing bodies, while in other aspects they are military officers. Catholic priest chaplains function under the auspices of the Archdiocese of the Military, USA. Within the military, the chaplains provide spiritual assistance to enlisted and officers alike, and they are important in assisting with morale. While chaplains operate under complete confidentiality, they can assist commanding officers with information of troop morale, as well as providing advice on moral and spiritual matters.

Chaplains from all faiths continue to serve in our Armed Forces, and they work in a variety of settings. Some are assigned to regiments or units, some to bases, some to ships, and some to institutions like hospitals. In all cases, chaplains have the unique responsibility of ministering to and supporting all of the individuals in their care, no matter what their faith background. The chaplain ethos comprises three principles: nurturing the living, caring for the wounded, and honoring the dead. Not only do chaplains work with soldiers, sailors, and marines, but they assist veterans and the families of servicemen and women.

For Catholic priest chaplains, much of the work looks like that of a parish. There is the celebration of Mass and the other sacraments, the administration of a “parish,” the counseling and support of individuals and couples, the care of those suffering from drug and alcohol addictions, visits to the sick, and the running of RCIA and religious education programs. The military has unique challenges because families frequently move, so that deployments can mean long separations from family. As well, combat trauma, injuries, suicide, and death are very real and present. When they deploy with units, chaplains live and work with the servicemen and women, but do not carry weapons.

The job of a chaplain is described by the current Chief of Chaplains for the U.S. Army, CH (MG) Paul Hurley, who is a Catholic priest, as follows:

Where it sucks the most, this is where the chaplain needs to be.

This could be in a hospital, on a ship, in a small outpost, or on a large base. Anywhere in the world where our Armed Forces are, chaplains are there providing spiritual support. So many chaplains of all faiths have and continue to live up to this high calling of selfless service. Like many Catholic priests, most of them are remembered only by those who served with them. Some have become famous like Fr. Anthony Rey, S.J., who served both soldiers and locals in the Mexican-American War, Fr. John B. Devalles, who was known as the “Angel of the Trenches” in World War I, and the four chaplains — all from different faiths on the U.S.A.T. Dorchester — who gave up their life jackets and seats on lifeboats to help save the soldiers after the ship was torpedoed in February 1943.

Two Catholic chaplains even have open causes for canonization. Fr. Emil Kapaun was known for his selfless service and died in a POW Camp in North Korea in 1951. Fr. Vincent Capadanno, known as “the Grunt Padre,” was killed in Vietnam in 1967. Despite having been already shot himself, Fr. Capadanno was killed going to aid a wounded corpsman who was under direct enemy fire.

On this birthday of the U.S. Army Chaplain Corps, we remember all those chaplains who have served our military, supporting our servicemen and women and their families. We thank those who currently serve as chaplains, and we pray for our future chaplains. Today, there are less than 250 Catholic chaplains serving the approximately 1.3 million active-duty servicemen and women in the U.S. Armed Forces. Uncle Sam is looking for a few good seminarians and priests.

St. John of Capistrano, patron of military chaplains, pray for us.

Image: Last Rites on the Battlefield (This photo is of Fr. Leo Peter Craig, O.P., Dominican Province of St. Joseph, near Chunchon, South Korea, April 15, 1951. Fr. Craig was killed by a land mine 20 seconds after this picture was taken.)