The first place I saw Mother Angelica was somewhere between the channels of a PBS documentary and a QVC jewelry auction. A Franciscan Poor Clare clad in a full religious habit beamed before a camera to discuss the sacrament of reconciliation. An eye patch graced her left eye while the right eye pierced every member of the live audience. Suffering the aftershock of a stroke, her slurred speech did not seem to affect her lively delivery, which kept her audience engaged. Was this a serious program or a parody of Sunday School in the 1960s? Why would anybody choose to watch Mother Angelica Live! over basic cable’s limitless offerings of relevant talk shows and addicting reality programs? Even with the prospect of finding something better to watch, I could not avert my gaze from the pirate nun’s presence on the air.

My experience flipping through channels and resting my remote on Mother Angelica is not an uncommon media miracle, as many have attributed their “coming home” to Catholicism through the programing provided by the Eternal Word Television Network. Once the cameras were rolling, the EWTN foundress could keep up the momentum of her onscreen joy with dramatic life examples to pair with passages from her Jerusalem Bible. Mother stood out as the nun who defended the Church with her gift of gab, breaking through liberal criticisms, battling her own personal objectors, and most of all, giving her entire consecrated life and television career to Jesus, her spouse. Even though she did not possess the formal teaching authority of a diocesan bishop or the credibility attached to multiple theology degrees, when the nun of Hanceville, Alabama spoke, the world listened.

Multiple strokes left Mother Angelica bedridden, crippled with pain and silence. The year 2001 marked the year Mother Angelica would go off the airwaves. It also marked the year that reality television shows would grow exponentially in popularity. So-called “reality shows” of the 21st century often showcased the flaws of human nature complete with heel striking and skull crushing. Shows like Survivor, The Real Housewives of Orange County, and The Apprentice presented living life with a constant competitive edge, putting everything on the line (especially human virtue) to win a crown that withers. By the mid 2000s, anyone with a remote in his hands had limitless opportunities to watch a program that ordained mortal sin and aired out private disputes for the sake of documenting “reality.”

What Mother Angelica documented on her shows was entirely different.

The holy, Catholic, and apostolic edutainment of Mother Angelica Live! was rooted in the concept that she was able to project the lived reality of the gospel message in every episode. She spoke off the cuff, took live calls from viewers, and offered sound advice to those in spiritual distress. Mother presented a real reality of the gospel, elucidating a common theme on her program that many Christians believe Jesus is in our midst but do not always live by what they know. Mother Angelica recognized the fallen state of man while offering an encouraging optimism that we were always called to something greater.

I remember hearing of her death on Easter Sunday 2016. This must have surely brought peace and solace to the frail Poor Clare after her fifteen-year hiatus from televised ministry. On the day of Mother Angelica’s funeral and burial, the Friday in the Octave of Easter, John’s Gospel brought to life the astonishment and sheer surprise of Jesus’ return while Peter, Nathaniel, and Thomas were out fishing. After a commanding invitation to “come, have breakfast,” Jesus made himself known once again through the breaking of the bread. Jesus left himself to us under the appearance of bread and wine, allowing the Easter joy of the Resurrection to live on.

Before St. Dominic’s immanent passing, he gave hope to his brethren, promising that he would be helpful after his death to the order of friars that he had founded. Today, the Dominican order lives on after 800 years! Mother Angelica’s mortal body may have passed on, but the vitality and worth of her evangelical personality lives on through her programs. The Poor Clare media nun who worked to have an impact on the catechesis and evangelization of the present Church lives on in the hundreds of hours of recorded talks, lectures, and programs on EWTN. She continues to bring the lived realities of Easter joy into the homes and hearts of millions, and her holy personality is as relevant today as it was when she first hit the airwaves in 1981. 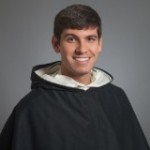 Br. Frassati Davis is from Bellevue, Nebraska. Before entering the Order of Preachers in 2015, he studied Philosophy at St. Mary’s University of Minnesota, and later worked in the Archdiocese of Omaha as a catechist and youth minister. On DominicanFriars.org