Menu
Confraternity of the Most Holy Rosary > Uncategorized > Love’s Perspective 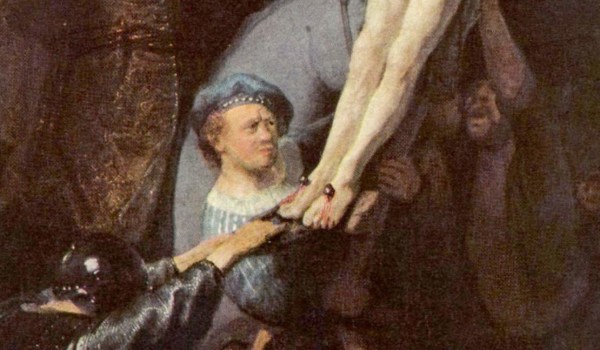 “What is hell? I maintain that it is the suffering of being unable to love.” – Fr. Zossima (Brothers Karamazov)

People are people, and people have opinions that can be emotive when provoked. Married couples get into occasional tiffs when they disagree with each other. This may be hard to believe and possibly scandalizing, but it turns out that consecrated religious are people too, and exhibit the same traits as other human beings. It’s possible that once in a while, one religious may get irritated at another.

Sarcasm aside, most would agree that taking a backward step to explain your frustration to yourself is one of the quicker and surer approaches to reveal the absurdity of over-reacting. Retrospection gives us a clearer vantage point on a situation that once occupied so much mental real estate.

In an intense scene from The Brothers Karamazov, Dmitri has a conversion of sorts after sitting in a prison cell for a couple months. Having made others suffer and in turn suffering some unfortunate ordeals himself, he gets the sense that redemption is possible even for him. As Alyosha prepares to leave from his last visit, Dmitri gives a parting exhortation to his youngest brother, “Love Ivan!” Ivan, psychotic in his cold, analytical, nearly inhuman state, was the brother in most need of love. Witnessing all the suffering in existence, Ivan couldn’t bring himself to find peace and so rejected any sense of meaning in the world God had created.

Dmitri Fyodorovich Karamazov was no saint to imitate, but it’s evident by the end of the chapter that he had gained a greater insight into life’s fundamental meaning. After being given a chance to reconsider his life, suffer for his past, and focus on his imminent sentence for a murder that he didn’t commit, Dmitri’s final words were a plea to love your brother.

After the death of Christ and the glorious events that followed, it’s possible to imagine the apostles promptly forgetting about who would sit where in the afterlife. The type of bickering among the 12 found in the Gospel accounts are notably absent in the Acts of the Apostles. Sure, there were still (and continue to be) disagreements on practice, specific teaching, etc., but these stem from their love of truth and struggle to be faithful, not from an egocentric pursuit of self-exaltation. Perhaps, after witnessing the passion of Our Lord, life’s meaning was finally put into a proper framework. Earthly rewards, and even heavenly ones that we conjure up in our imagination, are nothing in comparison to what we can do for the other based on love received. For the disciples, Christ’s death put life in love’s perspective.

Though the cloud of our own mortality constantly looms over our heads, it’s not until we look up and notice it that we remember to take into account our priorities in life. Frustrations arise and will continue to do so. Evil, pain, and wrong are still present, and won’t disappear while we’re in this life. Though increasingly difficult if not constantly recalled, an open-handed detachment to life’s practical concerns is crucial for happiness. This isn’t to promote laziness or indifference, but a truer perspective.

Only in loving can we see clearly. Love forces us to concern ourselves with the other and seek the common good, even if that means we have to take on what we wouldn’t want initially. Christ died for us, because that’s what love does. We die to ourselves for the sake of serving Christ in the other, because that’s what love does. Whether we have 60 years or 60 minutes left on Earth, being able to perceive what is worth living for (and thus, dying for) is the only way we’ll find genuine meaning until our last breath. We don’t zero in on our “own world” and demand that everyone attend to our desires, but maintain a gaze on where our ultimate satisfaction lies. This can only be thought of as loving what Jesus loved while he was being crucified. Dmitri’s words, then, should always be kept in mind: “Well, go, love Ivan!”

Image: Rembrandt, The Raising of the Cross (detail)